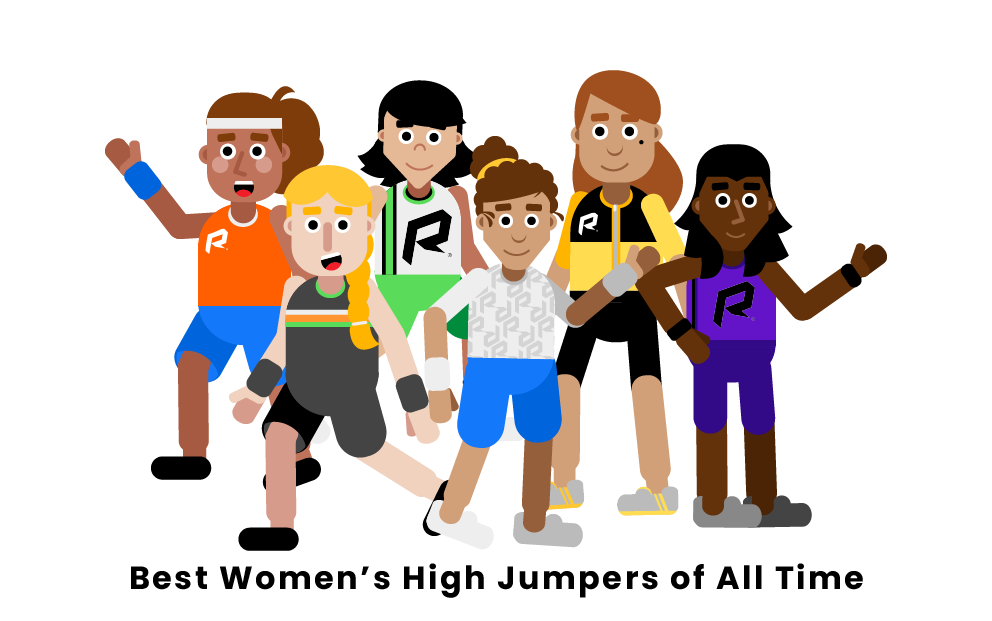 Being a world-class high jumper means possessing natural acrobatic ability and pairing that with explosive athleticism. There have been countless great female high jumpers over the history of the event, but only a few can call themselves Olympic medalists or, better yet, greats of their generations. To learn more about the top six women’s high jumpers of all time, keep reading below.

What are the best women's high jumpers of all time?

Among all the women’s high jumpers in history, no one has lept to greater heights than Stefka Kostadinova. Her 2.09-meter jump in 1987 remains a world record to this day, but that is far from the only line on her resume. Kostadinova won silver at the 1988 Olympics before returning to win gold in 1996. She has also won six gold medals in World Championships, with two coming outdoors and four coming indoors. Kostadinova set five new world records during her career and will go down as the best female athlete to ever compete in the event.

More than 20 years after Kostadinova’s record jump, Blanka Vlasic came within half an inch of equalling the record. Though she fell just short that day in 2009, she still remains one of the greats. She took home a silver medal at the 2008 Olympics and captured bronze in 2016. At the World Championships, she has been immensely successful winning, two golds and two silvers during her career. Vlasic had a knack for coming in first, racking up 14 Diamond League titles and 17 Golden League titles, the highest combined total of any women’s high jumper ever.

Just two years after Vlasic’s amazing jump, Anna Chicherova lept her way into the record books with a 2.07 mark, also only a half-inch behind her next-best competitor. Though she may not have bested Vlasic’s record that day, Chicherova’s career was full of besting the competition. She won gold at the 2012 Olympic Games and, in that same year, placed first at the Russian National Games, one of her 14 titles in the event. In international competition, Chicherova was just as successful, winning 11 Diamond League competitions and a gold at the World Championships. She also owns a pair of silver medals from the World Indoor and Outdoor Championships, as well as a bronze from both events.

The best athlete currently competing in women’s high jump, Mariya Lasitskene is one of five women in history to jump 2.06 meters. However, her list of achievements separates her from the rest. She won the gold medal at the 2021 Olympic Games and has won three gold medals at the World Championships. She has been equally dominant with a roof over her head; Lasitskene has also won a pair of golds at the World and European Indoor Championships. She has 26 titles in the Diamond League, far and away the most ever by a woman in high jump.

One of the other five at 2.06 meters all-time, Yelena Slesarenko is a decorated Russian jumper. She set her record on the biggest stage in sports, leaping into a tie for fifth on the world record leaderboard at the 2004 Olympic Games, where she won gold. Slesarenko was also a two-time gold medalist at the World Indoor Championships and added a silver at the competition in 2008. She has won four Golden League titles and is a four-time National Champion in Russia, as well as a one-time winner of the World Continental Cup.

There is no doubt that Hestrie Cloete is the best women’s high jumper ever from the continent of Africa. She is the only female African athlete in the top 30 on the high jump world record list, and she is also the only African women’s high jumper to win multiple medals at the Olympics. Cloete won silver in back-to-back Games from 2000 to 2004 and, in between, captured a pair of gold medals at the World Championships. She has won ten titles in the Golden League and nine National Championships in South Africa.

Who is the best women's high jumper in the world?

Currently, the best women’s high jumper in the world is Mariya Lasitskene. The defending gold medalist at the Olympics, Lasitskene is already tied for fifth all-time on the world record leaderboard and is looking to move up. She has won three gold medals at the World Championships and two golds at the indoor version of the competition. She also owns the most Diamond League titles of all time for women’s high jump, with 26 wins in her career.

Who holds the world record in women's high jumper?

The world record holder in women’s high jump is Stefka Kostadinova at 2.09 meters, or 6 feet 10 inches. Kostadinova set the record in 1987, but it was already the fifth world record she had jumped in her lifetime. She won a silver medal at the 1988 Olympics the following year, and at the 1996 Games won gold. She has four gold medals in both the World and European Indoor Championships and is also a two-time gold medalist at the outdoor World Championships.

Which women’s high jumper holds the most Olympic gold medals?

There are two women tied for the most Olympic gold medals in high jump. Both Iolanda Balas and Ulrike Meyfarth have won two golds, the only two women to ever win multiple gold medals in the event. Balas, a Romanian jumper, won hers back-to-back at the 1960 and 1964 Games. Meyfarth, competing for West Germany, had to wait a bit longer between golds, winning once in 1972 and again in 1984.