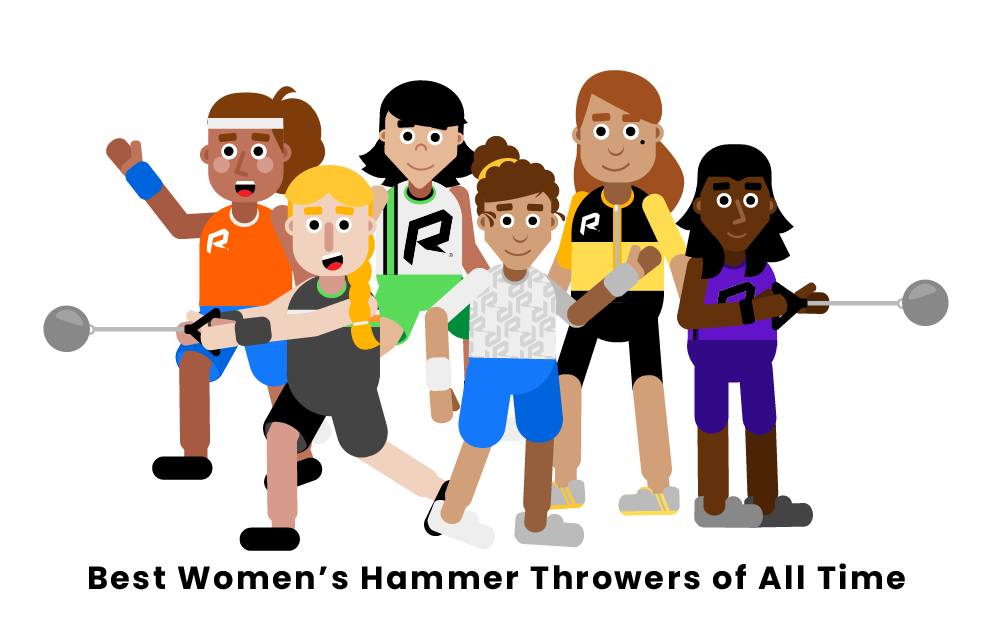 Hammer throwing is one of the oldest and longest-running sports in the Olympic Games. For years, this event has brought out the talent in countless competitors and allowed them a stage to show off their skills. This list will highlight some of the best women's hammer throwers of all time.

Who are the Best Women’s Hammer Throwers in the World?

Anita Włodarczyk is quite possibly the most well-known and respected thrower in the sport's history. Commonly accepted as the greatest of all time, Anita is heads and shoulders above the rest of the competition in terms of accolades. Włodarczyk holds the record for the most Olympic gold medals won by a female hammer thrower, with three gold medals won consecutively from 2012-2020 and an impressive four world championships. Anita also dominated the European games, winning another four first-place finishes.

Cuban hammer thrower Yipsi Moreno is one of the best talents that the hammer-throwing world has ever seen. Moreno is distinguished by her Olympic medals, which consist of gold at the 2008 Beijing Olympic games and silver at the 2004 Athens Olympic Games. Moreno was also dominant during her time at the World Championships, becoming a triple champion, winning in 2001, 2003, and 2005, and claiming three Pan American Games. Moreno's longest throw came during her 2011 quest to win that year's Pan American Games, and she managed to pull off a career-best 75.62 meters during that competition.

Chinese hammer thrower Zhang Wenxiu had an impressive professional career filled with successes and triumphs. After retiring from the sport in 2017, she remains one of the best the sport has ever seen. Her resume includes a career longest throw of 77.33-meters, the record for the sixth longest throw ever recorded by a female hammer thrower. Zhang has also collected an equally impressive pair of silver medals, won at the 2008 Beijing and 2016 Rio De Janeiro Olympic Games, three Asian Game victories, and two Asian Championships.

Former professional hammer thrower Betty Heidler came from Germany and was one of the most dominant forces ever seen for years. Heidler held the record for the longest throw by a female for years with a personal best of 79.42 meters, until Anita Włodarczyk finally broke it. Despite losing this world record, Heidler still has plenty of accolades to her name, including a silver Olympic medal won at the 2012 London Games and the 2007 World Championship in Osaka, and the European Championships in 2010 at Barcelona.

Polish hammer thrower Kamila Skolimowska is not only one of the best throwers to come out of Poland but one of the best in the world. One of her most notable achievements came during the 2000 Sydney Olympic Games, where Kamila Skolimowska won her first and only gold medal while simultaneously becoming the youngest Olympic hammer champion ever. Other notable feats Kamila achieved over her career include winning a silver (2002) and a bronze (2006) medal at the European Championships and having the 10th longest ever recorded throw in the hammer throw with 76.83 meters.

DeAnna Price is an American track and field athlete who, while young and fresh in the world of the hammer throw, is already making waves and making good impressions. Price currently holds the American record for the longest throw with her toss of 80.31 meters at the 2021 Olympic Trials and is second overall in the world. DeAnna has also already accumulated a few major accolades to her name, such as finishing 8th in the 2016 Rio De Janeiro Summer Olympics, winning the 2019 World Championships held in Doha, and the 2018 Continental Cup.

Who is the best women’s hammer thrower in the world?

Anita Włodarczyk is the best women's hammer thrower in the world, which is not shocking given her stunning career resume. A three-time Olympic gold medalist and four-time European and World Champion, her dominance at the professional level is unquestionable. Anita also holds the distinction of having the most gold medals ever won by a female hammer thrower and the record for the longest hammer throw ever achieved by a female.

Who holds the world record in women’s hammer throw?

Anita Włodarczyk holds the world record in women's hammer throw with an impressively long throw of 82.98 meters, a feat she achieved at the 2016 Rio De Janeiro Olympic Games. Not only is her longest throw the record, but she also holds the record for being the first female ever to break 80 meters on a single throw, achieved when she threw 81.08 meters in 2015 at the World Championships in China.

Which women’s hammer thrower holds the most Olympic gold medals?

Anita Włodarczyk holds the most Olympic gold medals, which is not surprising considering her many other records. Anita was able to win a stunning three different Olympic Games, the most ever. Anita's first gold came at the 2012 London Games, where she bested Betty Heidler. The second gold came during the 2016 Rio De Janeiro games after Anita defeated Zhang Wenxiu, and the final of her three consecutive gold medals was won at the 2020 Tokyo Games.