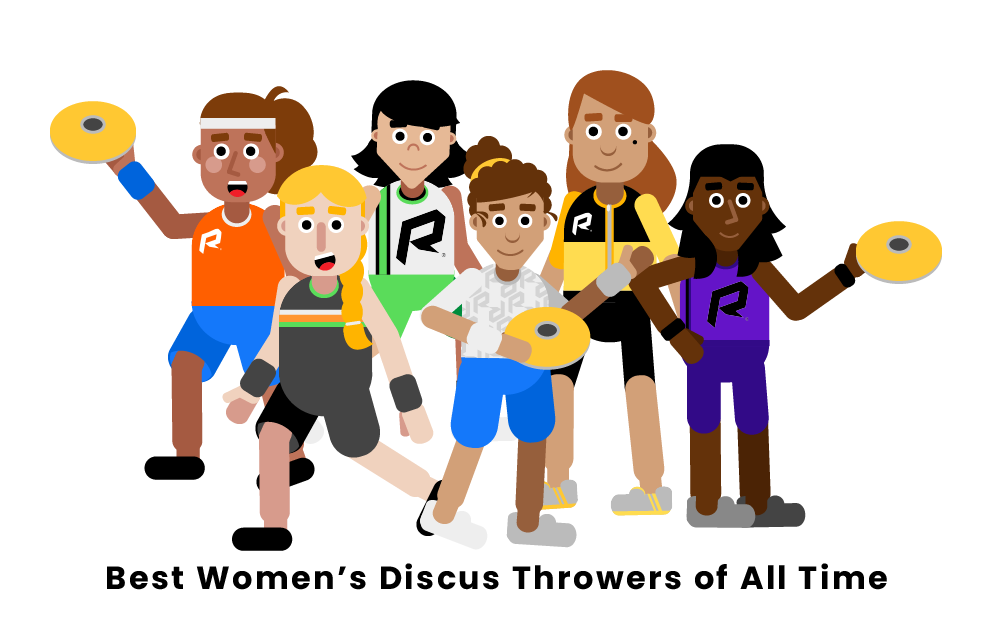 Discus has been around since the ancient Greeks, but the distances being thrown nowadays would blow away any of those who competed in the event long ago. Though men began throwing discus at the first Olympic Games in 1896, women did not start competing until they were first allowed at the Games in 1928. Since then, the sport has seen a number of immensely talented women throwers. Keep reading to learn more about the top six women’s discus throwers of all time.

Who are the best women’s discus throwers of all time?

Gabriele Reinsch may not have as many awards as some other women on this list, but her mind-boggling throw in 1988 earns her the top spot alone. She threw her disc 76.80 meters (or 251 feet 11 inches) that year in Germany, a world record that stands more than six feet ahead of second-place all time. Reinsch won two silver medals at the World University Games, one in 1987 and again in 1989, and also was the runner-up at the European Under-20 Championships in 1981. She is one of six German throwers in the world record top ten, representing the pinnacle of throwing prowess in the country.

Tied for the second all-time in women’s discus history, Ilke Wyuldda was one of the many dominant German discus throwers of her time. She won gold at the 1996 Olympics and, in that same year, won both a National Championship and a Grand Prix Final. Internationally, Wyludda was a superstar, taking home two silver medals from the World Championships and a pair of gold medals from the European Championships. She was successful from a young age, winning the World Under-20 Championship twice before going on to professional fame. She also won two golds and a silver medal at the World Continental Cup.

Coming in tied for second on the all-time world record leaderboard, there’s no question that Zdenka Silhava is the best discus thrower in Czech history. Though she is more well-known for setting the discus world record in 1984 with a 74.56 meter (or 244 foot 7 inch) toss, Silhava was also an accomplished shot putter, winning two National Championships and three National Indoor Championships. Silhava did not have as much international success as some of the other throwers on this list, but she is one of just two to ever set the world record and was the oldest among these athletes (30) when she set her personal best.

Another product of the epic German throwing era that was the 1980s, Diana Gansky is fourth all-time on the world record list. She won a silver medal at the 1988 Olympic Games and also won a silver at the 1987 World Championships. The year prior, Gansky won gold at the European Championships, and, in 1981, she was the winner of the European Under-20 Championships as well. She did not compete in as many international competitions as some other names on this list, but when she did, she made it count.

Though she is not officially in the top six when it comes to the world record leaderboard, there’s no doubt Tsvetanka Khristova ranks in the top six of all time. She captured a bronze medal at the 1988 Olympic Games and came back stronger in 1992 to win the silver. She had a similar four-year rise in the World Championships, where she won bronze in 1987 and seized the gold medal in 1991. Khristova also owns both a gold and silver medal from the European Championships as well as the World University Games. During her career, she won six National Championships in Bulgaria.

Another name outside the top six throws of all time, Martina Hellmann’s achievements are too much to ignore. She was the gold medalist in women’s discus at the 1988 Olympic Games and also won two golds at the World Championships in 1983 and 1987. Overall, Hellmann was one of the best women’s discus throwers of her time, winning two bronze medals at the European Championships and placing first at the World Continental Cup in 1985. Like many others on this list, she is one of the great German throwers of the eighties, and her awards distinguish her as one of the best to ever compete in the event.

Who is the best women’s discus thrower in the world?

Currently, the best women’s discus thrower in the world is Valarie Allman. The American thrower holds the best mark of any women’s discus athlete in the 21st century, heaving a 71.46 meter (or 234 foot 4 inch) mark in 2021. She was also the gold medalist at the Olympic Games earlier that year and is the current world record holder in women’s discus in North America, Central America, and the Caribbean.

Who holds the world record in women’s discus throw?

The current world record holder in women’s discus is Gabriele Reinsch, with a throw of 76.80 meters (or 251 feet 11 inches). Reinsch’s world record is one of the more dominant ones in sports, sitting more than six feet ahead of the next-best throw. She won two silver medals at the World University Games and was also the runner-up at the European Under-20 Championships in 1981.

Which women’s discus thrower holds the most Olympic gold medals?

Currently, there are two women’s discus throwers tied with two Olympic gold medals each. Nina Romashkova from Russia won once in 1952 and again in 1960. Sandra Perkovic from Croatia won hers back-to-back in 2012 and 2016, becoming the only woman in the event’s history to do so. Women’s discus has been one of the more tightly-contested track and field events in history, with many of the top ten records coming within inches of each other.