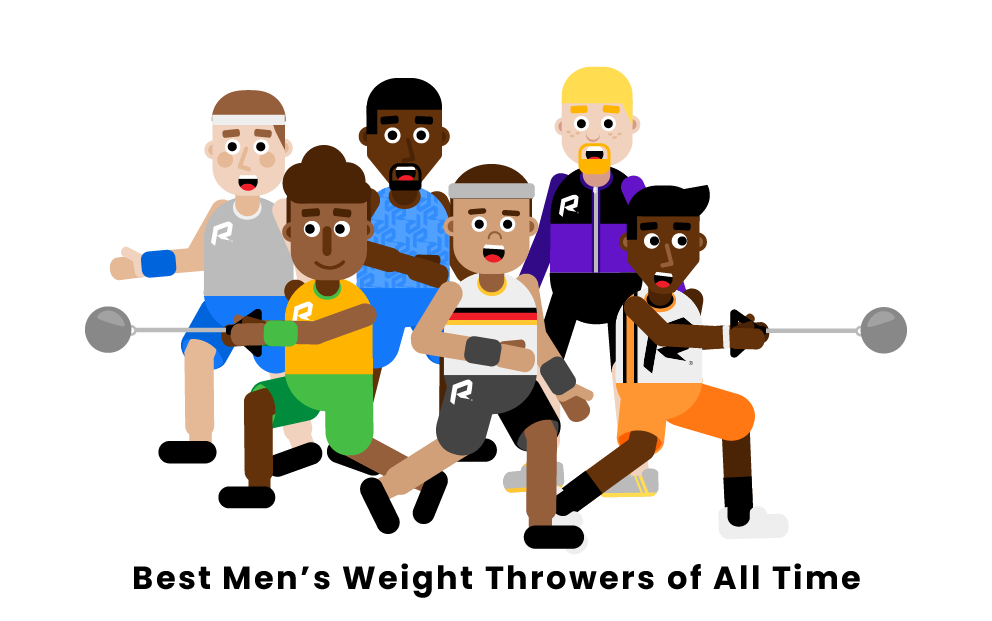 The weight throw, also known as the hammer throw, is one of the best displays of raw human strength in sports. Athletes must heave their weight as high and far as possible down the field, and only the best compete for championships. Great weight throwers combine otherworldly power with carefully crafted technique to become the best in the business. Keep reading below to learn about the six best men’s weight throwers of all time.

What are the best men’s weight throwers in the world?

In 1986, just a month after the world record had been set, Yuriy Sedykh launched his weight farther than any man had ever done before and cemented himself atop the world record leaderboard. However, Sedykh’s legacy extends far beyond his record-breaking throw. He won a gold medal at the 1976 Olympic Games, and in 1980 he repeated as Olympic champion. Sedykh returned to the Olympics in 1988 and won a silver medal, a resume that would have sufficed had it stopped there. However, the Russian thrower accomplished far more during his career. At the World Championships he took home a silver medal in 198, and eight years later in 1991, he captured the gold. Sedykh was also a three-time European Championships gold medalist.

Just 58 days before Sedykh set the new world record, Sergey Litvinov was the talk of the sporting world. He set what was then a world record with his 86.04 meter (or 282 foot 3 inch) throw in July of 1986, a moment that came in the prime of his throwing career. Litvinov won a silver medal at the 1980 Olympics, and in 1988 he defeated Sedykh to seize the gold. Litvinov was also great in international competition, winning a pair of gold medals at the 1983 and 1987 World Championships. On a continental scale, he was a bronze medalist at the 1982 European Championships and took home a silver medal in 1986 on the same day that Sedykh set the new world record.

In 2005 in his home country of Belarus, Vadim Devyatovskiy recorded the farthest men’s weight throw of the century, launching his throw over 278 feet. That was typical of Devyatovskiy, who always seemed to flourish in his native land. He won three national championships in Belarus, but he was also very successful abroad. In 2004 at his first Olympics, he won a bronze medal, and when he returned in 2008 he was able to capture the silver. In 2005, the same year as his personal-best throw, Devyatovskiy won gold at the World Championships, and a month later he won a silver medal at the World Athletics Final.

Kojii Murofushi holds a unique distinction that no one else on this list can claim: he is the only Asian athlete within the top 80 of all time in weight throwing. Murofushi burst onto the scene in the early 2000s, and in 2003 recorded what was at the time the farthest throw the sport had seen in 17 years. In 2004, he took home the gold medal at the Olympic Games; he came back eight years later to capture a bronze. He also completed the medal trifecta at the World Championships, winning gold, silver, and bronze during his career. By far, Murofushi’s most impressive accomplishment was his dominance of weight throw in his home country. From 2000 to 2013, he won 14 straight National Championships in Japan, winning a total of 16 national titles over the course of his career.

Ivan Tikhon is one of the best weight throwers in recent history, claiming a number of titles across various competitions. In both 2003 and 2007 he won gold at the World Championships, and he won all three medals at the World Athletics Finals, taking home a gold, silver, and bronze throughout his career. He was an Olympic bronze medalist in 2008 and in 2016 moved up to winning a silver medal. Tikhon was one of Belarus’s finest athletes, winning four straight National Championships between 2001 and 2004 before winning two more in 2008 and 2016.

Who is the best men’s weight thrower in the world?

Currently, the best men’s weight thrower in the world is Pawel Fajdek from Poland. Fajdek recorded the farthest throw of 2021 and overall is tenth on the all-time world record leaderboard with a 83.93 meter (275 foot 4 inch) throw recorded in 2015. He won bronze at the 2021 Olympic Games and is a four-time World Championships gold medalist. Fajdek also has one gold and two silver medals at the European Championships.

Who holds the world record in men’s weight throw?

The world record holder in men’s weight throw is Yuriy Sedykh. In 1986 in Germany, Sedykh launched his weight over 284 feet, capturing the top spot on the world record list. He was extremely successful as a competitor, winning two gold medals and a silver medal at the Olympic Games. Sedykh also took home a gold and a silver at the World Championships and was a three-time European Championships gold medalist.

Which men’s weight thrower holds the most Olympic gold medals?