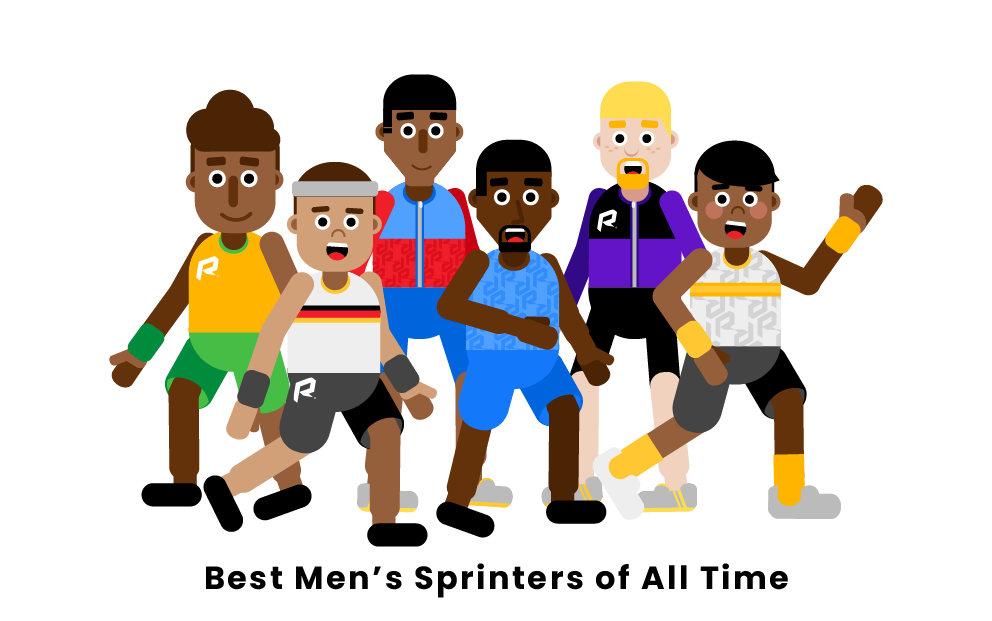 Most people are involved in a race at some point in their lives; whether it’s two 5-year-olds on the playground or athletes at the Olympics, the goal is the same: be the first to finish. The best sprinters of all time happen to be a collection of some of the fastest humans ever to grace the Earth. Below are six of the best sprinters that the world has ever seen.

Who are the best men’s sprinters of all time?

Usain Bolt is one of the most dominant athletes in history and is currently the World Record holder in the 100m and 200m. At the age of 15, Bolt won the gold medal in the 200m Final at the 2002 World Junior Championships, the youngest winner in event history. Bolt primarily participated in three different events: the 100m, 200m, and the 4x100m. Bolt managed to win three consecutive Olympic gold medals in both the 100m and 200m, which means that no opponent ever defeated him in an Olympic Final. Bolt also won three straight 4x100m gold medals, but the victory from the 2008 Beijing Olympics was vacated following a teammate’s positive test for doping. Bolt’s 100m record is so absurd that only one other runner in history has finished within .11 seconds of it.

Carl Lewis dominated as both a runner and a jumper in ways that few other humans possibly can. Lewis is one of the few Olympic athletes to ever claim four gold medals at a single Olympics, which he did at the 1984 Summer Olympics. He also broke the World Record for the 100m at the 1984 Olympics, beating the next closest finisher by the widest margin in Olympic history. Perhaps one of the things Lewis is most famous for is staying away from steroids during the era where they notably rose to prominence. During his career, there was a stretch where he went over ten straight years without an official loss in the long jump.

Jesse Owens is an American legend, accomplishing unbelievably remarkable feats. Owens is likely best-known for his performance at the 1936 Berlin Olympics, which Hitler and the racist Nazi regime hosted. Owens would go on to win gold medals in the 100m, 200m, long jump, and 4x100m relay, where the US squad set a new World Record. One of his most remarkable feats actually occurred while he was in college at the BIG10 conference championships, where Owens set three World Records in the span of an hour. He also happens to be one of the greatest what-ifs in sports, as he never got another opportunity to expand upon his Olympic greatness as World War II canceled the 1940 and 1944 Olympics.

Michael Johnson is one of the most dominant athletes the sport of track has ever seen. He started out at Baylor University, where he would set the school’s 200m record. Johnson had a unique running style that would have made him memorable even if he hadn’t been winning the races. He dedicated himself to only two events: the 200m and 400m. Johnson’s unbeaten streak began in 1993, and he would go on to race 58 consecutive 400m races before his next loss. That streak included the 1996 Atlanta Olympics, where Johnson would win the gold medal in the 400m and the 200m, where he would set a World Record that Bolt would later break.

Maurice Greene experienced the majority of his success on the indoor track, where he set records that still stand. At his peak, Greene managed to win three consecutive World Championships and the 100m Gold Medal at the 2000 Sydney Olympics. By the time Greene retired, he held the record for most races completed under ten seconds in the 100m with a total of 53. Greene managed to win the gold medal in the 60m, despite suffering an injury mid-race at the 2001 Outdoor World Championships.

Although Tyson Gay may not have the list of achievements that the other runners do, it’s because he’s had to spend so much of his career chasing Bolt. Gay has the second-fastest 100m race ever recorded; he just happened to run it a month after Bolt set the current record. Gay is one of only five men in history to run the 100m in under 10.75 seconds. Gay is also one of only seven men to ever run the 200m in under 19.60 seconds. Unfortunately, Gay’s name has long been involved in the PED discussion, which diminishes the greatness of some of his feats.

Who is the best men’s sprinter of all time?

It’s hard to argue against Usain Bolt being the best men’s sprinter of all time. Not only is Bolt the World Record holder in the 100m, no other human has ever come within .10 seconds of ever breaking that record. In addition to the record, Bolt is also the owner of the next two fastest races ever in the 100m, making him the owner of the three fastest 100m in history. Meanwhile, in the 200m, Bolt is only slightly less dominant, possessing four of the six fastest 200m races in history, including the current World Record.

What men’s sprinter has the most Olympic gold medals?

Carl Lewis is the sprinter holding the most men’s Olympic gold medals in track events with nine. He managed to dominate not just in the sprinting events but the long jump as well. Lewis also had a silver medal to go along with his nine golds for a total of ten Olympic medals. Usain Bolt managed to win nine gold medals over his Olympic career; however, one of those was stripped away due to a teammate caught doping in the 4x100m relay.

What men’s sprinter has the best 100m sprint time ever?

Usain Bolt is the sprinter with the best 100m sprint time ever. This occurred at the 2009 World Championships in Berlin, where Tyson Gay managed to finish in second. Gay finished the 100m final with a time of 9.71 seconds, just shy of the then-World Record of 9.69 seconds. Bolt defeated Gay by a massive margin of 0.13 seconds and set the current World Record in the 100m with a time of 9.58 seconds.

Pages Related to Top 6 Best Men's Sprinters of All Time