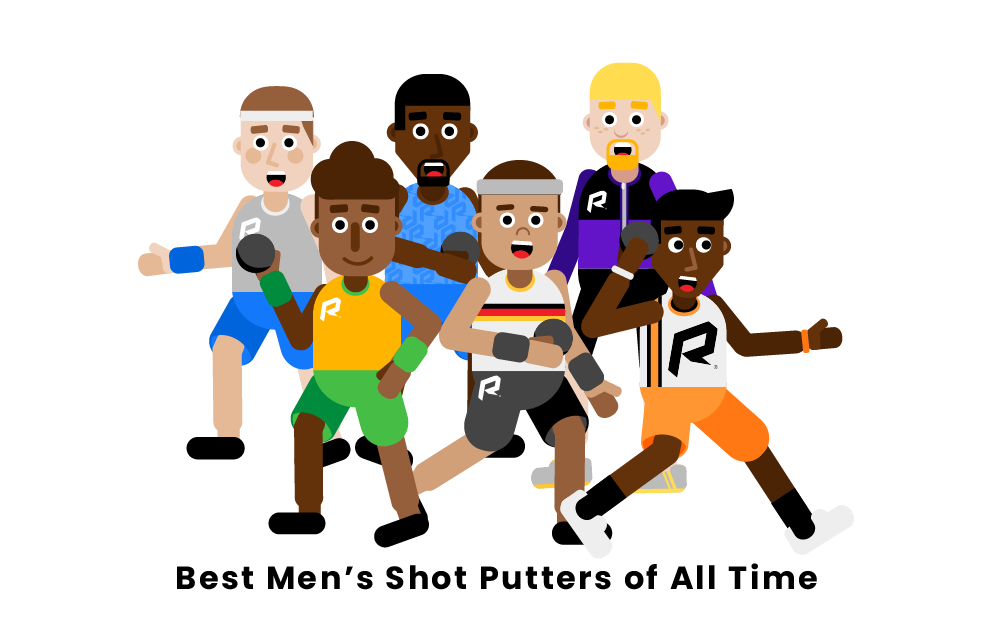 Shot putters are some of the most impressive athletes to watch, throwing their weights farther than any regular person could ever hope to. Usually bulky in size and with muscles bigger than some people’s bodies, shot putters also possess a certain grace that allows them to maximize distance with each throw. Keep reading below to learn about the top six men’s shot putters of all time.

What are the best men’s shot putters of all time?

Without question, Ryan Crouser is the best shot putter of the modern era, and he’s also one of the greatest of all time. In 2021 at the U.S. Olympic Trials, he set a new world record with a 23.37 meter (or 76 foot, 8 inch) throw, breaking a 31-year-old record held by fellow American Randy Barnes. Crouser was able to parlay that success into a gold medal at the 2021 Games, his second consecutive gold medal after also winning in 2016. Crouser has been dominating American competition since he was a teenager, winning 10 Diamond League titles and four National Championships, as well as three National Indoor Championships.

The record holder until Crouser’s historic heave, Randy Barnes put together quite the resume during his time as a shot putter. He won silver at the 1988 Olympic Games and came back in 1996 to capture the gold medal. That same year, he also won gold at the National Championships, a feat he would repeat the next year. Barnes was also a top international athlete, winning silver at the 1993 World Championships and bronze in 1995 at the same event, as well as taking home silver at the 1989 World Indoor Championships.

Before Barnes’ record in 1990, there was Ulf Timmerman. His throw of 23.06 meters (or 75 feet, 8 inches) was a world record when it landed in Greece in 1988. Just a few months later, Timmerman would go on to win gold at the Olympic Games. Timmerman won numerous international competitions, taking gold twice at the World Indoor Championships and a silver at the outdoor version of the event. He also dominated European shot put, winning six total medals in the European Indoor and Outdoor Championships. He is currently the European record holder in both outdoor and indoor shot put.

Tied with Alessandro Andrei for fourth place, Joe Kovacs is one of the century’s best shot putters. He has won back-to-back silver medals at the Olympics in both 2016 and 2021, and is still actively competing. He took home the gold at the 2015 World Championships and repeated his winning effort four years later at the same event. In between, Kovacs also won a silver medal at the 2017 World Championships, and he has captured two National Championships so far. In addition to all this success, Kovacs is also a seven-time Diamond League winner.

Alessandro Andrei’s list of titles may not be as long as others on this list, but that does not take away from his talent. He set three world records during his career, with the last one coming just under a year before Timmerman bested him. He was the gold medal winner in shot put at the 1984 Olympic Games, and was also a bronze medalist at the European Indoor Championships that same year. Andrei seized a silver medal at the 1987 World Championships and, in addition, won two titles at the Mediterranean Games.

Coming in just under an inch all-time behind Andrei and Kovacs, Tom Walsh has still accumulated his fair share of accolades. He has won consecutive bronze medals in the 2016 and 2021 Olympic Games, and owns both a gold and a bronze medal from the World Championships. Walsh has been even better indoors, winning two golds at the World Indoor Championships to go along with a pair of bronze medals. He is a two-time Diamond League winner and is the Oceanic record holder for indoor and outdoor men’s shot put.

Who is the best men’s shot putter in the world?

The best men’s shot putter in the world currently is Ryan Crouser. Crouser has won back-to-back gold medals at the Olympics and is also currently the world record holder. In 2021, Crouser competed in 14 events, winning them all. He has continued the success of Americans in men’s shot put and will look to win a third consecutive gold in 2024.

Who holds the world record in men’s shot putter?

The current world record in men’s shot put is Ryan Crouser, with a throw of 23.37 meters (or 76 feet, 8 inches). Crouser has won countless competitions during his career. He has a silver medal from the World Outdoor and Indoor Championships, as well as dozens of first-place finishes over the years. He is also currently the men’s record holder for indoor shot put.

Which men’s shot putter holds the most Olympic gold medals?

There are actually four men’s shot putters tied for the most Olympic gold medals at two. Not only are there four athletes with the same record, but they all recorded their gold medals in back-to-back fashion. Ralph Rose won consecutive golds in 1904 and 1908, and Parry O’Brien did the same at the 1952 and 1956 Games. Nearly fifty years later, Polish thrower Tomasz Majewski repeated golden efforts in 2008 and 2012, and Ryan Crouser won the following two gold medals in 2016 and 2021.