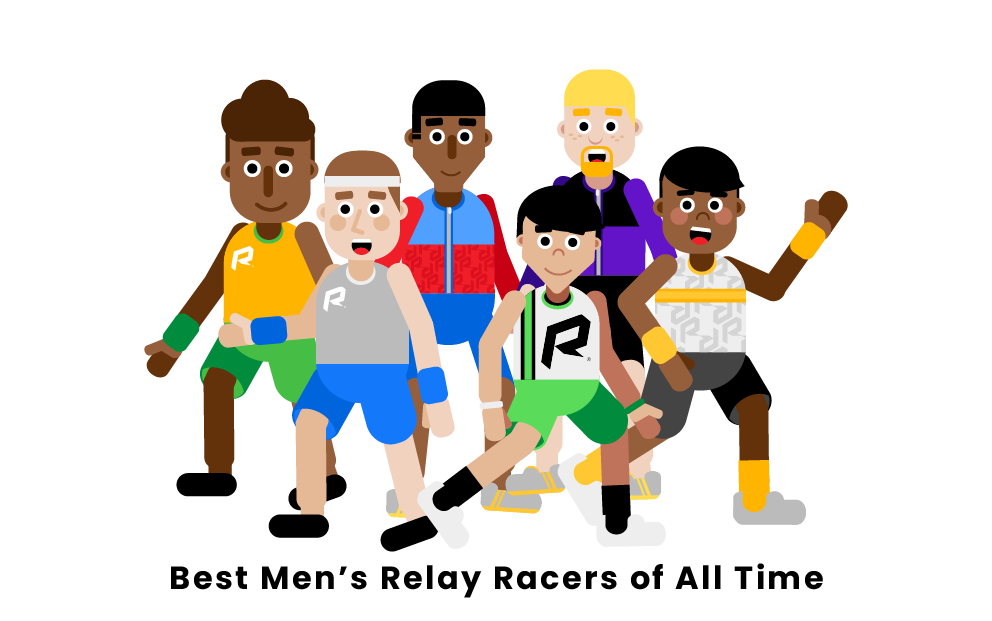 There are two primary relay races at the Olympic Games: the 4x100 meter and the 4x400 meter. These events have been around for over a hundred years and have seen numerous countries win gold medals, though some nations have been more successful than others. Relay racing is a team sport, but when it comes down to the final leg, each country wants its most talented runner to hold the baton. Keep reading below to learn more about the top six men’s relay racers of all time.

What are the best men's relay racers in the world?

Though he may have competed long ago, Frank Wykoff is still remembered as the most accomplished men’s relay racer. Racing for the United States 4x100 team, Wykoff racked up three straight gold medals, the most of any relay racer ever. He started his career in 1928 and won his first gold at the Games in Amsterdam. Four years later, Wykoff moved to the anchor spot,helped the U.S. secure another gold, and set a world record in the men’s 4x100. Another four years passed, and it was a similar result, with Wykoff again anchoring the relay team to another world record and a third gold medal.

Though he is widely known as the greatest sprinter in men’s history, Usain Bolt was also one of the best in relay racing. He successfully anchored Jamaica’s 4x100 team twice at the Olympic Games, winning back-to-back golds in 2012 and 2016. His first gold with the team was also a historical one, as Jamaica’s 36.84 mark was the fastest the world had ever seen and is still a world record today. Bolt also won four gold medals and one silver with the 4x100 team at the World Championships and is a Diamond League and Golden League champion in the 4x100 relay.

One of the most successful 400-meter runners in recent history, LaShawn Merritt, was able to parlay his dominance into the world of relay racing. Competing with the American 4x400 team, Merritt helped achieve history. He won gold at the 2008 Olympics and helped the United States set a new world record in the 4x400 with a time of 2:55:39. Although he did not compete with the team in 2012, he returned in 2016 to capture his second 4x400 gold medal. In other major international competitions, Merritt and his relay team continually flexed their racing muscles, taking home six gold medals in the 4x400 at the World Championships and seizing a gold at the 2006 World Indoor Championships.

Running alongside Merritt for much of his career, Jeremy Wariner was another key cog in the American 4x400 team that dominated world competition. He ran his first Olympics in 2004, winning a gold medal in the 400 meters and a gold medal with the 4x400 relay team. Four years later, Wariner was part of a historic effort when he helped Merritt and his teammates achieve a new world record in the 4x400. Wariner owns three gold medals in the 4x400 relay from the World Championships; he also won a National Championship in the event while he was in college.

Before the time of Merritt or Wariner, Steve Lewis was part of the great American 4x400 relay teams of the eighties and nineties. He began his relay career by helping UCLA win the NCAA Championship in 1988. That same year, Lewis headed to Seoul, where he was one of the four runners responsible for helping lift the Olympic gold in the 4x400 meter. At the following Olympic Games, Lewis was once again running for the American relay team, and this time they set what was then a world record with a time of 2:55:74, earning Lewis his second relay gold.

Though Chris Brown may not have the same amount of gold medals as the other members of this list, his accomplishments at the Olympic Games are still noteworthy. He won three Olympic medals as part of the Bahamas’ 4x400 relay team (a gold, a silver, and a bronze), tying him with Wykoff for the most relay medals by one man in Olympic history. He was also instrumental to the Bahamas’ success in various other international competitions, earning the team a gold medal, two silvers, and a bronze at the World Championships, and a silver at the World Indoor Championships.

Who is the best men's relay racer in the world?

The best men’s relay racer in the world is Frank Wykoff. In 1928, Wykoff won his first gold medal in the 4x100 relay, but he wasn’t done there. He repeated as a gold medalist in 1932 and 1936, becoming the first man ever to win three gold medals in relay racing history. Wykoff was also a part of setting four different world records during his racing career.

Who holds the world record in men's relay races?

Which men's relay racer holds the most Olympic gold medals?

The men’s relay racer with the most Olympic gold medals in relay events is Frank Wykoff, with three. Wykoff competed long before any other men on this list were born, winning his first Olympic gold medal in 1928. During the following eight years, Wykoff and his American teammates went on to win two more golds, giving them three consecutive gold medals and giving Wykoff a record that still stands to this day.