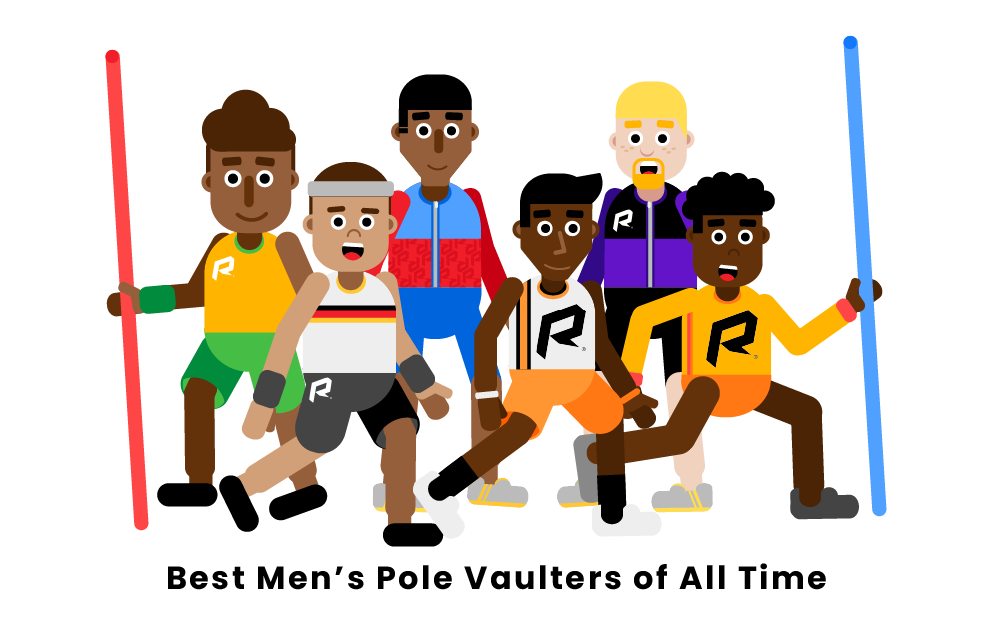 Pole vaulting is a sport in which an athlete launches their body over an obstacle at increasing heights using the aid of a pole. It has been an Olympic event for men since the Modern Olympic Games began in 1896. Listed below are the six best men’s pole vaulters of all time.

Who are the best men’s pole vaulters of all time?

Ukraine-born Sergey Bubka is a legend in men’s pole vaulting history. Representing the Soviet Union, he won his first IAAF World Championship in 1983 and won the next five consecutive World Championships as well. At the 1988 Olympic Games in Seoul, he also won a gold medal. He broke the world record for men’s pole vault 35 times during his illustrious career, including being the first pole vaulter to clear 6 and 6.10 meters. In 2012, he became one of the inaugural members of the International Association of Athletics Federations (IAAF) Hall of Fame and will forever be one of the greats.

Armand Gustav “Mondo” Duplantis is the future of the men's pole vault. He won gold at the 2015 World Youth Championships at the age of 15 and has set several junior records since then. In 2018, he competed at the senior level and won gold at the 2018 European Championships with a record height of 6.05 meters. In his short career, he has set a new world record for both indoor (6.18 meters) and outdoor (6.15 meters) pole vaults and won the gold medal at his first Olympics in 2021. With assuredly more records to set and awards to win, Duplantis is already one of the sport’s all-time greats.

Sam Kendricks is America’s greatest pole vaulter and one of the all-time greats. He began his career at the University of Mississippi, winning both the 2013 and 2014 NCAA Championships. Immediately afterward, he went professional and won the next six outdoor National Championships, as well as three indoor national titles. On the international level, Kendricks won a bronze medal at the 2016 Olympics and then the 2017 World Championship. In 2019, he set the American pole vault record at 6.06 meters and won yet another World Championship, cementing his legacy as one of the greatest men’s pole vaulters of all time.

Renaud Lavillenie is a French pole vaulter and one of the all-time best athletes in the sport’s history. In 2010, he began a consecutive streak of seven IAAF Diamond League Championships and two years later won gold at the 2012 Olympics in London. In the following years, Lavillenie also won gold at seven European-wide championships in addition to three World Indoor Championships. After a silver showing at the 2016 Olympics, he set the French national record for highest pole vault clearance (6.05m outdoors and 6.16m indoors) and held the world record clearance until 2020 as well.

In addition to being Russia’s greatest pole vaulter, Maksim Tarasov is one of the sport’s best all-time athletes. After lukewarm showings at both the junior and senior levels, he catapulted to fame with a surprise gold at the 1992 Summer Olympics, representing the Unified Team. In 1996, Tarasov set the Russian national record for pole vault clearance at 6.05 meters. He went on to win his first European Championship in 1998, a World Championship in 1999, and a bronze Olympic medal in 2000. Though he retired a year later due to injury, Tarasov left his legendary mark on the sport.

In addition to his international success, Piotr Lisek is Poland’s greatest pole vaulter. In 2015, he won his first international medals, with bronzes earned at both the European and World Championships. After participating in the 2016 Olympic Games, he won his first silver at the World Championship and became the first Polish pole vaulter to clear 6.00 meters. At the same time, he became only the tenth vaulter in the sport’s history to achieve that high a clearance. In the two years that followed, Lisek slowly broke his own record until reaching a maximum of 6.02 meters in 2019 and made history as one of pole vaulting’s greatest athletes.

Missouri-born Jeff Hartwig has stayed at the top of his game as he ages. With a personal record indoor jump of 6.02 meters, only four others have ever jumped higher indoors. In international competition, Hartwig won gold medals at the 1998 Goodwill Games and the 2002 IAAF Grand Prix Final. Continuing to compete in the Masters division, Hartwig holds records for the highest jump for men over 35 (5.86 m) and for men over 40 (5.70 m).

Australian former World Champion Dmitri Markov won a silver medal at the 1999 World Championships in Seville before taking the world title in Edmonton in 2001. He has finished in the top eight in two Olympic Games, with a career-best finish of fifth in 2000. With a 6.05-meter personal record, Markov holds the record for highest jump in Oceania.

Who is the greatest pole vaulter of all time?

The greatest pole vaulter of all time is Sergey Bubka. From 1983 to 1996, he won six consecutive IAAF World Championships. In 1988, at the Seoul Olympic Games, he won gold. Throughout his nearly two decades competing, Bubka broke the world record for men’s pole vault and then continued to break it another 34 times and became the first pole vaulter ever to clear 6 meters. In 2012, he entered the IAAF Hall of Fame as the sport’s greatest athlete.

Which men’s pole vaulter has won the most Olympic gold medals?

Who holds the height record for men’s pole vaulting?

The height record for men’s pole vaulting is currently held by Armand Duplantis. At the 2018 European Championships, he won gold with a record height of 6.05 meters. In the next few years, he set the world pole vaulting record for indoor at 6.18 meters as well as the outdoor record at 6.15 meters. After setting both records, Duplantis won his first Olympic gold in 2021 and remains the current greatest men’s pole vaulter in the world.