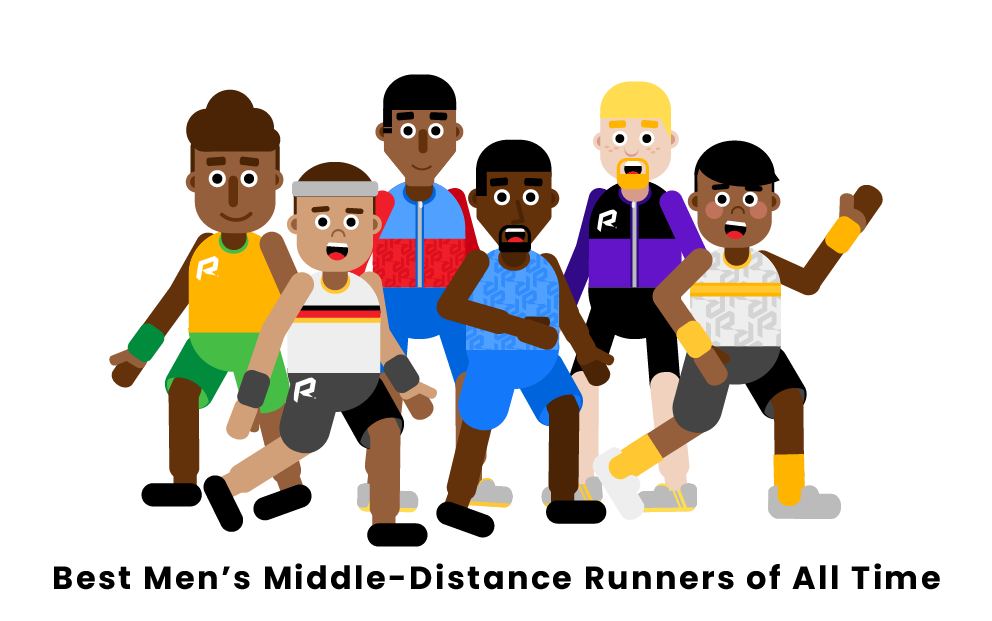 Middle-distance running is typically defined as any race between 800 and 3000 meters in length, or a half-mile to roughly two miles. Top athletes in these events must have tremendous endurance, but also the ability to kick it into another gear as the race nears the end. Finding the right balance between going all-out and keeping a consistent pace is no easy feat, and only a few have ever truly mastered the art. To learn about the top six men’s middle-distance runners of all time, keep reading.

What are the best men’s middle-distance runners of all-time?

Hicham el Geurrouj was one of the most complete runners of his time. He set the world record for the men’s 1500-meter in 1998, and the next year ran the second-fastest time ever in the men’s 3000 meters (7:23:09). In 2000, at the Olympic Games, he won silver in the 1500, but he would return to the Games in epic fashion. In 2004, he won gold in both the 1500 and 5000-meter races, cementing his legacy as an all-time great runner. He has also won four gold medals at the World Championships, as well as two silvers, and is a three-time World Indoor Championships gold medalist in the 1500.

Three years after El Geurrouj's record run, Bernard Lagat came within half a second of breaking the world record. Though he didn’t succeed, his name will still be remembered for generations. He won bronze in the 1500-meter at the 2000 Olympics, and came back in 2004 to win silver. Lagat was immensely successful in World Championship competitions, winning two golds, three silvers, and a bronze at the outdoor version of the event. Lagat also won three golds and two silvers at the World Indoor Championships. Lagat was also a 15-time National Champion across both the 1500 and 5000-meter races, winning once in Kenya and the rest in the United States.

Conquering the 800-meter is a difficult task, to be sure, but David Rudisha did so masterfully in his time as a middle-distance runner. At his first-ever Olympic Games in 2012, Rudisha put on perhaps the best display of 800-meter running ever seen, winning the gold medal while also setting a new world record. In 2016, he defended his crown with another gold, and shortly afterward, he retired. Winning was nothing strange to Rudisha, who took home two golds at both the World Championships and African Championships during his career. He captured 18 Diamond League titles in the 800 and was a three-time national champion in Kenya.

When Sebastian Coe recorded a time of 1:41:73 in 1981, it was the fastest time the world had ever seen in the 800 meters. Though he has since fallen to third on the world record leaderboard, Coe’s legacy remains as one of the best to ever touch the track. In 1980 at the Olympic Games, he won a silver medal in the 800-meter and seized the gold in the 1500, but he wasn’t done there. At the 1984 Games, he turned in a similar effort, once again winning silver in the 800 and gold in the 1500. As impressive as his Olympic resume is, his accolades didn’t end there. He was also an extremely successful European runner, earning a gold, two silvers, and a bronze medal at the European Championships over the years.

16 years after Coe’s record-breaking 800-meter effort, Wilson Kipketer took over the world’s number-one spot with his 1:41:11 time in 1997. At the 2000 Olympic Games, he captured a silver medal, and at the 2004 Games, he took home bronze. Kipketer was dominant in world competition, winning three gold medals at the World Championships as well as a gold and two silvers at the World Indoors. He won eight Golden League meetings and set seven world records during his career. He currently holds three world records in Europe for the men’s 800-meter, the men’s indoor 800-meter, and the men’s 1000-meter indoor.

Asbel Kiprop was one of the most successful middle-distance runners in recent history. He won a gold medal in the 1500 meters at the 2008 Olympic Games, and in his career, he took home three gold medals from the World Championships. At the African Championships, Kiprop completed the medal triple crown, winning a gold, a silver, and a bronze. He is a three-time national champion in Kenya and has won 23 Diamond League meetings between the 800-meter, 1500-meter, and one-mile races. Kiprop has also won two Golden League titles and finished second at the World Athletics Finals in 2008.

Who is the best men’s middle-distance runner in the world?

Who holds the world record in men’s middle-distance running?

Which men’s middle-distance runner holds the most Olympic gold medals?

The men’s middle-distance runner with the most Olympic gold medals is Peter Snell with three. Snell, a New Zealand runner, won back-to-back golds in the 800 meters at the 1960 and 1964 Olympic Games, and also captured a gold medal in the 1500 meters at the 1964 Games. He also set four world records during his career.