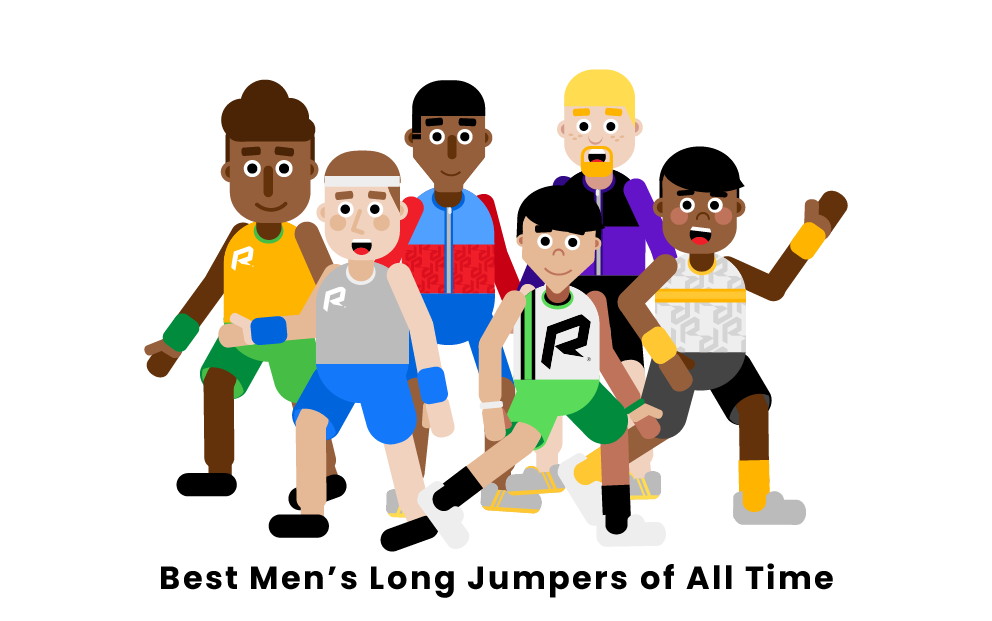 The long jump is one of the most spectacular events to watch in track and field. Athletes leap impressive distances, soaring through the air before landing with a spray of sand. Being a good long jumper requires achieving top speeds on the runway, combined with outstanding explosiveness to leap and land properly. Interestingly enough, six of the top seven jumps of all time were recorded before 1995, and no one has come within a foot of the record since 2009. Keep reading to learn more about the six best long jumpers of all time.

What are the best men’s long jumpers in the world?

There’s no question Mike Powell is the longest jumper of them all. In 1991 at the World Championships, he leaped a world-record 8.95 meters, nearly the entire length of the pit. That jump was more than enough to earn him a gold medal at the event, one of two gold medals Powell would win at Worlds. Although he holds the world record, Powell never actually won a gold medal at the Olympic Games. He has two silver medals from 1988 and 1992, and in the 1996 Summer Games, he finished fifth. Still, no one else can say they have jumped as far as Powell, and that distinction earns him the top spot on this list.

Though his jump may not have been the furthest, Bob Beamon’s world record leap in 1968 remains one of the most astounding records in Olympic history. He broke the previous record by nearly two feet and took home the gold medal. First place had been expected of Beamon that year, as he won 22 of 23 events leading up to the Olympics, but such a jump was unheard of until that point. What made it more remarkable was the age at which he did it, just over a month removed from his 22nd birthday. His record would stand for over 20 years until it was broken by Mike Powell in 1991. Beamon remains the youngest long jumper to ever set a world record.

While Carl Lewis may not have the longest jump here, he is undoubtedly the greatest Olympian on this list. Lewis also competed in the 100 and 200-meter races, as well as the 4x100 relay during his 12-year career, winning multiple gold medals in the 100 and 200. Perhaps more impressive than his four long jumping medals is the way in which he won them. In 1988, Lewis became the first person ever to win back-to-back gold medals in the event, a feat which he repeated at the 1992 and 1996 Summer Games. At 35 years old, Lewis became the oldest long jumper ever to take the gold when he won it in 1996.

After Emmiyan, the record falls off by a few inches. Erick Walder is tied for fifth with a leap of 28 feet 8 inches and has a number of accolades to his name. He won a silver medal at the 1998 World Championships and was twice a bronze medalist in the indoor event, once in 1997 and again in 1998. One mark that Walder does hold above all the other names on this list is that he owns the longest jump in NCAA history. Walder actually set his personal record that day in 1994 during a regular-season track meet, the only athlete here to record a career-best while in college.

The last spot on this list goes to Dwight Phillips, the youngest member of the group. Phillips recorded his 8.74-meter jump in 2009, the only jump this century to be in the top six. In 2004, he took home the gold medal at the Olympic Games in Athens, and four separate times he was a gold medalist at the World Championships. He also won a gold medal at the 2003 Indoor World Championships. Phillips is one of the best long jumpers of the 21st century and will be remembered for it.

Who is the best men’s long jumper in the world?

Currently, the best long jumper in the world is Juan Miguel Echevarria. Echevarria actually broke Mike Powell’s record in 2018 when he jumped 8.83 meters. However, there was a tailwind of 2.1 meters per second on the jump, disqualifying it from the world record books. The threshold for an acceptable jump is no more than a two-meter per second tailwind, meaning Echevarria just barely missed out on joining the top five of all time.

Who holds the world record in the long jump?

The world record holder for the long jump is Mike Powell, with an amazing jump of 8.95 meters, or 29 feet 4 inches. Powell set the record back in 1991 at the World Championships, easily taking home the gold medal and nearly jumping out of the pit in the process. Since then, the closest official record is an 8.74 meter (28 feet 8 inches) jump.

Which men’s long jumper holds the most Olympic gold medals?

The men’s long jumper who holds the most Olympic gold medals is Carl Lewis with nine. Only four of those medals are for long jump, but that is still a record for the event. In fact, Lewis won his four gold medals in four straight Olympics. No other long jumper has ever won back-to-back golds. In addition to his long jumping medals, Lewis also has five gold medals in the 100, 200, and 4x100 meter races.