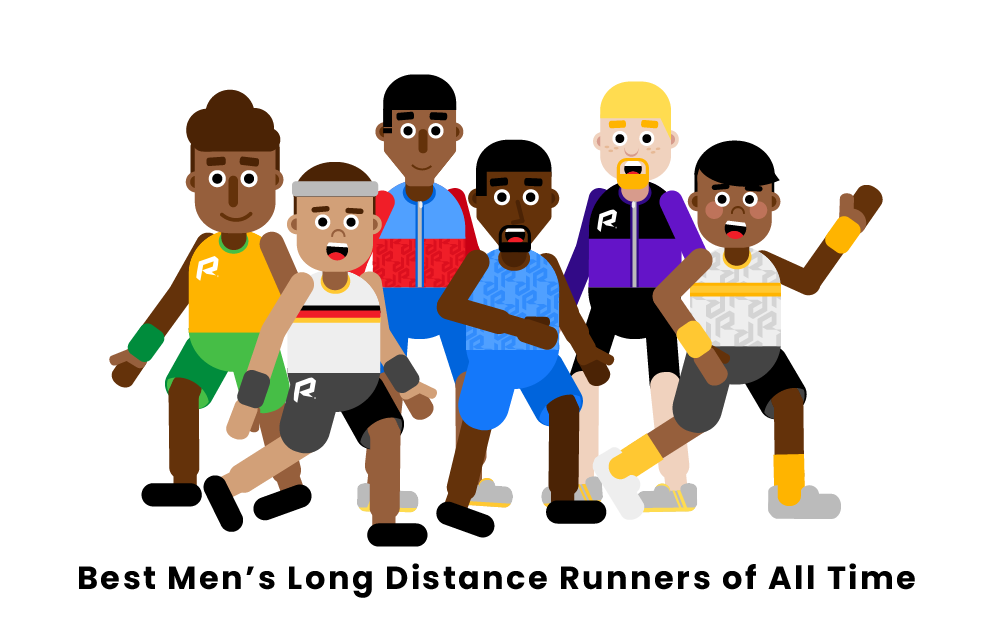 Running long distances can be one of the most grueling things to do in all of sports. Athletes must stay intently focused for long periods of time, maintaining lightning-fast paces while refusing to let their fatigue ruin them. It’s a form of running that few have mastered over the years, making the sport's stars much more impressive. At the Olympics, there are three long-distance events that both men and women compete in: the 5,000 meters, the 10,000 meters, and the marathon. Keep reading below to learn more about the six best men’s long-distance runners of all time.

Who are the best men’s long distance runners in the world?

For any athlete, achieving even one time that can be placed on the world record leaderboard is extremely impressive. But for Kenenisa Bekele, he needed more. He owns the second-fastest time ever in the men’s 5,000 meters (12:37:35), but also set the second-fastest time ever in the 10,000 meters (26:17:53) and the men’s marathon (2:01:41). This trio of marks alone makes him one of the best long-distance runners of all time, but his never-ending list of accolades cements his legacy as the greatest. Bekele was a three-time Olympic gold medalist, also winning silver once in his illustrious career. He added five gold medals at the World Championships and was a 12-time World Cross Country Championships gold medal winner, the most of any man all time. Bekele also won three World Athletics Finals golds, two African Championships golds, and 17 separate Golden League titles.

When it comes to Olympic gold medals in men’s long distance, no one can top Mo Farah. The British runner’s four Olympic golds are the most all-time in long-distance running, but those were far from the only gold medals he won. Farah also captured six golds from the World Championships, as well as seven at the European Championships, five outdoors and two indoors. One of the greatest runners of the 21st century, Farah set the world record in the men’s 1 hour in 2020, running 21,330 meters in just 60 minutes. He ranks no higher than 23rd on any of the world record leaderboards for men’s long distance, but his legacy is certainly that of an absolute icon. Farah also won 16 Diamond League titles during his career, the most of any man in the category ever.

Perhaps the most well-known marathoner of all time, Eliud Kipchoge was dominant across the globe during his superstar career. He won two gold medals at the Olympic Games in 2016 and 2021 and also added a silver in 2008, as well as a bronze medal at the 2004 Games. Internationally, Kipchoge accumulated a boatload of medals, winning a gold medal at the World Championships, the World Cross Country Championships, and a pair of golds at the World Athletics Finals. He was also a four-time Golden League winner and won a Diamond League title in 2010. Kipchoge also won seven Major Marathon titles from 2014-2019.

Competing in the late 90s and early 2000s, Paul Tergat was one of the most dominant athletes of his time. He won a silver medal at the 1996 Olympic Games in the 10k and came back in 2000 to claim a second silver. Outside of the Olympics, Tergat was even more successful, capturing four gold medals at the World Cross Country Championships, as well as two golds at the World Half Marathon Championships. He set three world records during his career, and his time of 26:27:85 in the men’s 10,000 meters was a record when he ran it in 1997. Tergat has also won two silver medals and a bronze at the World Championships and was a two-time Golden League winner.

The only reason Joshua Cheptegei isn’t higher on this list is the fact that he is still just 25 years old. Despite being so young, Cheptegei has already achieved a lifetime’s worth of awards. He won gold in the 5k at the 2021 Olympic Games and also won a silver medal in the 10k that same year. In the World Championships, the Ugandan runner won silver in 2017 before putting on a dominant display to take home the gold in 2019. However, his most impressive pair of achievements by far are his dual world records in both the men’s 5,000 meters (12:35:36) and the men’s 10,000 meters (26:11:00). Cheptegei is the only athlete on this list to own more than one world record, and he is truly one of long distance’s rising stars.

Who is the best men’s long-distance runner in the world?

The best men’s long-distance runner in the world currently is Joshua Cheptegei. Although he is only 25 years old, Cheptegei has already set the world record in both the men’s 5,000 meters and the men’s 10,000 meters. He owns a gold and silver medal each from both the Olympic Games and the World Championships and also won gold at the 2019 World Cross Country Championships.

Who holds the world record in men’s long-distance runners?

Which men’s long-distance runner holds the most Olympic gold medals?

The men’s long-distance runner with the most Olympic gold medals is Mo Farah, with four. The greatest Olympic long-distance performer of all time, Farah’s ownership of four gold medals may come as a surprise to those who only look at world records. His highest placement in any of the long-distance events is 23rd in the 5,000 meters, though he does own the fastest time of any European man ever. Still, he has been able to win a quartet of gold medals, taking home a pair at both the 2012 and 2016 Olympic Games.