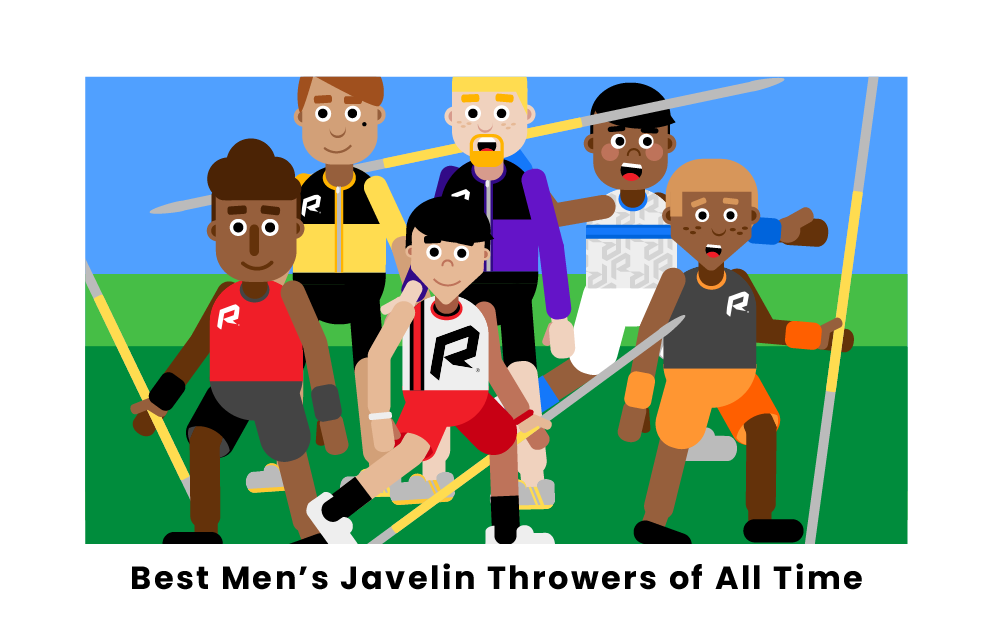 People have been throwing spears for a long time, and the organized sport of javelin has been around since the ancient Greeks included it in their Olympiad. While great javelin throwers must possess tremendous strength, their ability to master the technique and optimize their throws is what separates them from the rest. Keep reading to learn about the six best men’s javelin throwers of all time.

Who are the Best Men's Javelin Throwers in the World?

With a world record that stands over two feet above second place all-time, there’s no doubt Jan Železný is the best javelin thrower of all time. He won three straight Olympic gold medals from 1992-2000 and added a silver medal in the event at the 1988 Olympics. Železný’s gold medals did not stop there, however. He also won three golds at the World Championships during his career and has two bronze medals from the same competition. Železný set the world record in javelin throwing four times during his career, with his last record remaining on top of the all-time leaderboard to this day.

Though Johannes Vetter does not have as complete a resume as some of the other throwers on this list, his 97.76-meter heave speaks for itself. Vetter set his personal best in 2020 and is still actively competing, so he may add more accolades in the future. In the meantime, he has won one gold medal at the 2017 World Championships and won a bronze medal at the same event in 2019. Vetter has appeared in the Olympics twice, but finished in fourth place in 2016 and fifth place in 2021.

A fellow German to Vetter, Thomas Röhler is not far behind his countrymate when it comes to the all-time record. At the 2016 Olympic Games–the only Olympics he has appeared in during his career–Röhler took home the gold medal. Two years later, in 2018, Röhler also won gold at the European Championships. He set his record in 2017 at the Diamond League competition in Qatar, winning the event. Overall, Röhler has won five Diamond League meetings. He is still actively competing today and has thrown in two World Championships so far.

When Aki Parviainen recorded his 93.09-meter throw in 1999, it was the second-farthest javelin throw the world had ever seen. He has since been knocked down a couple of spots, but that does not take away from his tremendous legacy. In the same year as his record throw, he won gold at the World Championships, and in 2001, he captured the silver at the same competition. Parviainen did make one Olympic Games appearance in 2000, placing fifth, and overall, he has competed in six World Championships.

Coming in just one inch behind Parviainen’s record, Anderson Peters is still one of the top javelin throwers in the history of the sport. Though he sits at fifth place on the all-time leaderboard, Peters is the youngest member of this list at just 24 years old. He won gold at the 2019 World Championships while still attending college, and also won gold at the Pan-Am Games that same year. Peters is currently the collegiate world record holder in men’s javelin, throwing 87.31 meters (or 286 feet, 5 inches) at those same Pan-Am Games.

A self-taught javelin thrower, Julius Yego rose through the ranks to become one of the most accomplished men of all time in the sport. He took home silver at the 2016 Olympic Games and was very successful in international competitions. His record throw came at the perfect time, as he set the mark at the 2015 World Championships to win the gold. Yego is without a doubt the best javelin thrower to ever come from the continent of Africa, winning four African Championships gold medals and two All-Africa Games golds.

Who is the best men’s javelin thrower in the world?

Currently, the best men’s javelin thrower in the world is Johannes Vetter. Vetter is ranked number one in the world by average points scored in competition, and he is also second all-time on the world record leaderboard. Vetter has appeared in two Olympic Games, finishing in fourth and fifth, respectively. He is still actively competing and, in 2021, had the farthest throw by over 22 feet.

Who holds the world record in men’s javelin throw?

The world record holder in men’s javelin is Jan Železný, with a throw of 98.48 meters (or 323 feet 1 inch). Železný is the most accomplished men’s javelin thrower of all time, winning three consecutive gold medals at the Olympics and taking home the silver in his first appearance at the Games. In addition, Železný also won three World Championships gold medals, as well as two bronze World Championships medals.

Which men’s javelin thrower holds the most Olympic gold medals?