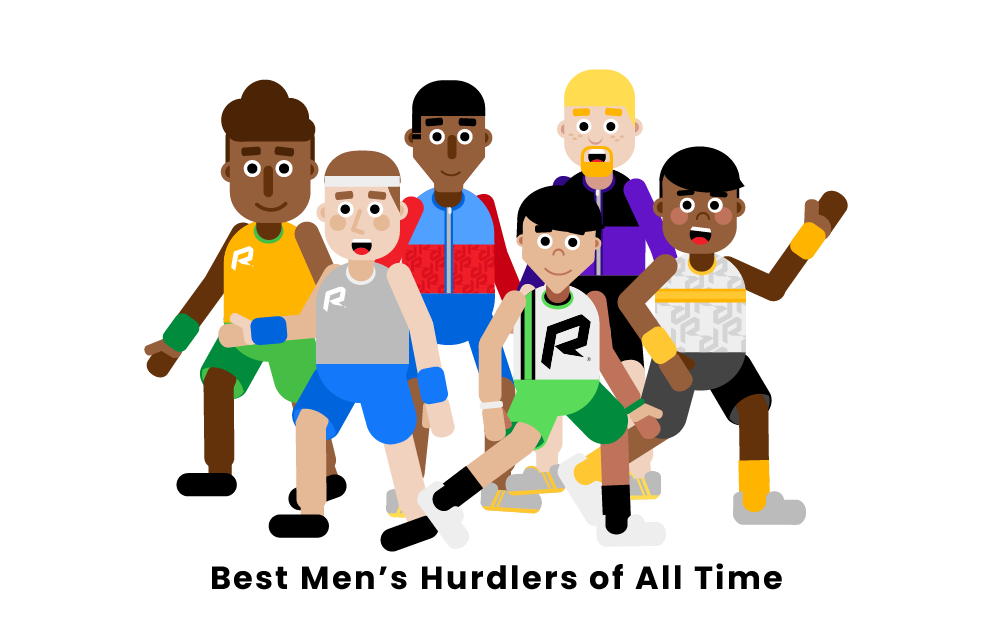 Becoming a top-tier hurdler is not easy. Athletes must master the ability of elite sprint speed and pair it with flawless technique to clear hurdles. There are two main types of hurdling races: the 110 meter and the 400 meter. Some runners specialize in one, while others dominate them both. Keep reading below to learn more about the six best men’s hurdlers of all time.

What are the best men’s hurdlers of all time?

The fastest man to ever run the 110 meter hurdles, Aries Merritt is one of the greats when it comes to men's hurdlers. He set the world record in 2012, and it has yet to be topped since. Merritt had a great year in 2012, also winning the gold medal at the Olympics and the gold medal at the World Indoor Championships. He’s won six Diamond League titles in his career and competed until the age of 35. Merritt also won bronze at the World Championships in 2015, and in 2004, won the World Under-20 Championship.

Kevin Young is one of the fastest men to ever run the 400 meter hurdles. He blazed a 46.78 second time in 1992 to capture the world record, and he kept the top spot until 2021. Not only did Young set the record that year, he did so on the biggest stage possible. His record-breaking time came in the finals of the 1992 Olympic Games, earning him the gold medal and the top place on the all-time leaderboard. In addition to this spectacular feat, Young also won a gold medal at the 1993 World Championships and seized a silver medal at the 1987 Pan-Am Games.

Though Edwin Moses may not have the fastest time in the men’s 400 meter hurdles, he is possibly the most decorated man ever to run the event. He won gold at the 1976 and 1984 Olympic Games before also winning a bronze medal in the 1988 Olympics. Moses also captured two gold medals at the World Championships in 1983 and 1987. He set four separate world records in his career and was the record holder until Young broke his mark.

The best hurdler to ever come out of the Asian continent, Liu Xiang had tremendous international success over the course of his career. In 2004, he won gold at the Olympic Games, also winning silver in the 60 meter hurdles at the World Indoor Championships. Xiang also won gold at the 2007 World Championships and added two silvers and a bronze at the same competition in other years. He currently holds three different hurdling records for Asians and is a three-time Diamond League winner.

David Oliver was one of the most physically-imposing athletes ever to run hurdles. Despite his bulky frame, Oliver still blazed his way to numerous national and international honors. At the 2008 Olympic Games, he won bronze, and that same year, he took home a gold medal at the World Athletics Finals. Oliver also seized the gold medal at the 2013 World Championships and won 14 Diamond League titles in his career, the most of anyone on this list. He has also captured two Golden League titles and won gold at the Pan-Am Games in 2015.

By far the best hurdler ever to be born in Africa, Samuel Matete dominated during his career. He won silver at the 1996 Olympic Games and took the gold medal at the 1991 World Championships. Matete also blazed past everyone else on the African continent; he won gold at the 1998 African Championships and is the current record holder for the men’s 400 meter among all African runners. Matete won two silver medals at the World Championships in addition to his gold and retired as one of Zambia’s best athletes ever.

Who is the best men’s hurdler in the world?

Currently, the best men’s hurdler in the world is Karsten Warholm. Warholm has set the world record twice in the men’s 400 meter hurdles, with his second record coming in dramatic fashion. Warholm narrowly edged out Rai Benjamin in the 2021 Olympics by setting a new world record of 45.94 seconds, taking home the gold medal in the process. Warholm also has two World Championships golds and two European Championships golds, one indoor and one outdoor.

Who holds the world record in men’s hurdlers?

The current world record holder for the 110 meter hurdles is Aries Merritt, and the record holder for the 400 meter hurdles is Karsten Warholm. Merritt set his world record in 2012 with a time of 12.80, and Warholm set his mark of 45.94 in 2021. Merritt has won one Olympic gold and one World Indoor Championships gold, and Warholm has won an Olympic gold plus two World Championships golds.

Which men’s hurdler holds the most Olympic gold medals?

There are actually three men’s hurdlers tied with the most Olympic gold medals, with two each. Glenn Davis, Felix Sanchez, and Edwin Moses all won a pair of gold medals. By far the most famous of the trio was Moses. He also won an Olympic bronze medal in 1984, and captured two gold medals in World Championships. During the course of his career, he set and reset the 400 meter world record four times. He is one of the most well-known names in hurdling and has remained a central figure in the sport.

Pages Related to Top 6 Best Men's Hurdlers of All Time