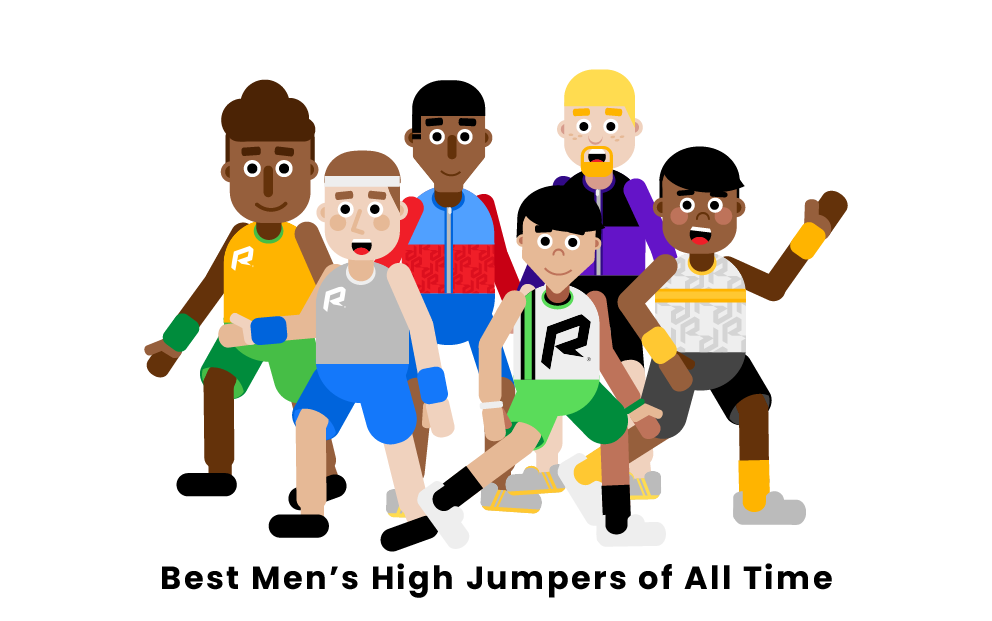 The high jump is an event that combines athletics with acrobatics. Competitors jump high into the air before twisting and turning their bodies to clear a horizontal pole before crashing back down onto a mat. Being a world-class high jumper requires amazing leaping ability, but also perfected technique. Below, the top six best men’s high jumpers of all time are listed. Keep reading to learn more about each of them.

What are the best men’s high jumpers in the world?

When most people think of high jumpers, they think of Javier Sotomayor, and for good reason. Sotomayor holds the world record for the highest jump ever at just over eight feet, and he is the only high jumper in history to ever clear the eight-foot mark. In addition to this outstanding feat, Sotomayor also won gold at the 1992 Olympic Games and came back to win silver at the 2000 Games. He won two gold medals at the World Championships and has also won two silver medals at the same event. As if that all wasn’t enough, he has also won four gold medals at the World Indoor Championships.

One of the most colorful personalities in track and field, Mutaz Essa Barshim always leaves everything on the track. At the 2020 Tokyo Olympics, Barshim and Italian high jumper Gianmarco Tamberi actually tied for the gold medal. After neither jumper could clear a height past 2.37 meters, the two decided to share the gold medal, the first ever for Barshim. He also won silver medals at the 2012 and 2016 Games, and has two outright gold medals at the World Championships. Barshim’s 2.43 meter jump in 2014 remains the highest of the century and is only an inch behind the world record.

Known for his luscious golden locks, Patrick Sjoberg also possessed incredible leaping talent that brought him success around the world. He won silver at the 1984 and 1992 Olympics, and also won a bronze medal in 1988. Sjoberg was able to take home gold twice at the World Championships and added a silver and a bronze medal at separate World Indoor Championships. His mark of 2.42 meters from 1987 stood in second place on the world record leaderboard until Barshim broke it by less than an inch in 2014, but Sjoberg remains one of the best high jumpers of all time.

Tied with Sjoberg for the third-highest jump in history, Bondarenko set his mark just three months before Barshim broke into second place. In 2016 at the Olympics in Brazil, Bondarenko won a bronze medal after finishing in sixth at the previous Games in 2012. He won a gold medal at the World Championships in 2013 and followed that up with a silver at the 2015 World Championships. Bondarenko has also won gold at the European Championships. He is also a ten-time winner of the Diamond League, an elite track and field competition held every year.

Though Igor Paklin may not have the Olympic success of the other athletes on this list, his skill as a jumper is unquestioned. In August of 1985 he became the first athlete to ever clear 2.41 meters, cementing himself in the record books. He won a silver medal at the 1987 World Championships, and captured the gold at the World Indoor Championships that same year. Paklin did not compete in many international competitions during his career and took a five-year absence from professional jumping, but his name still stands in the top five all time when it comes to men’s high jumping records.

Austin is tied with five other jumpers for the number six spot on the all-time record board, but his resume is the most impressive overall. He only ever won one Olympic medal, but he made sure it was the big one. In 1996, his 2.39 meter hop was good enough to seize the gold. However, Austin’s gold medal count did not stop there. He also won at the 1991 World Championships and again at the 1997 World Indoor Championships. Austin was also a two-time winner at the Golden League.

Who is the best men’s high jumper in the world?

The best men’s high jumper in the world currently is Gianmarco Tamberi from Italy. Tamberi actually tied with Mutaz Essa Barshim for the gold medal at the 2020 Tokyo Games, and both athletes took home a share of first. In addition, Tamberi has won gold at the World Indoor Championships and the European Championships. Tamberi dealt with injuries earlier in his career, but he has bounced back and become a dominant force in men’s high jump.

Who holds the world record in men’s high jumper?

The world record holder in men’s high jump is Javier Sotomayor, with a mark of 2.45 meters (or 8 feet). Sotomayor remains the only jumper to ever clear eight feet, a mark he set back in 1991. Adding on to his world record, Sotomayor also won a gold medal at the 1992 Olympic Games and a silver medal at the 2000 Olympics. Perhaps most impressively, Sotomayor won four gold medals at the World Indoor Championships, the most golds ever for a men’s high jumper.

Which men’s high jumper holds the most Olympic gold medals?

Interestingly enough, no men’s high jumper has ever won multiple gold medals in the event's current form. From 1900-1912, a standstill version of high jump was featured in the Olympics, and American Ray Ewry won the first three gold medals. However, this version of high jump looked much different than today’s spectacle. From this list, there are three Olympic gold medalists: Javier Sotomayor, Mutaz Essa Barshim, and Charles Austin.