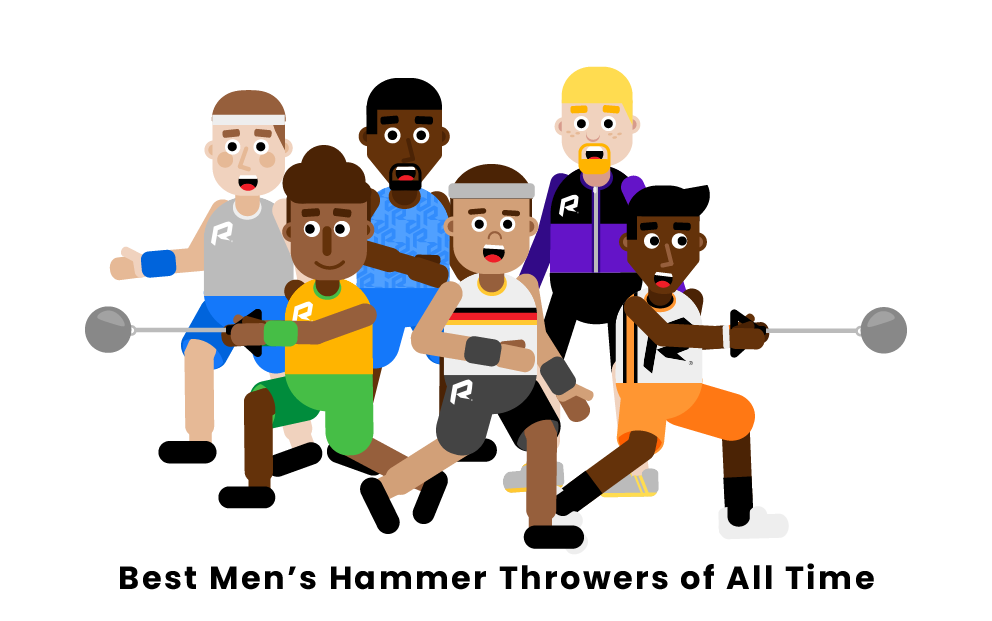 Since the 1900s, the hammer throw has been one of the longest-running track and field events in the history of the Summer Olympics and, over the years, has produced some impressive athletes. This list will highlight some of the best men's hammer throwers of all time and explain what made them so great.

What are the best men’s hammer throwers in the world?

Yuriy Sedykh is the greatest hammer thrower the world has ever seen, representing the Soviet Union in three separate Olympic Games and winning two gold medals. Sedykh had a major impact on the sport, known for his outside-the-box technique that included an extra rotation before his throw. Despite his odd methods, his skills were undeniable. He found immense success over his career, winning three European Championships, one World Championship, and a stunning six separate world records. His most notable accomplishment on his already impressive resume is his world record for the longest throw, which still stands today at 86.74 meters.

John Flanagan was an Irish-American hammer thrower and one of the first-ever stars of the sport. Flannigan was part of the first wave of hammer throwing athletes, as he participated in and won the first Olympic hammer throw competition held at the 1900 Paris Summer Games with a 49.73-meter throw. Flanagan won two more Olympic gold medals in 1904 and 1908, the most of any men's hammer thrower. Flannigan set 14 world records, including being the first man to throw a hammer more than 150 and 160 feet, established in 1897 and 1899, respectively.

Sergey Litvinov was a Soviet Union hammer thrower; born in 1958, Litvinov became one of the greatest hammer throwers ever. Litvinov won a gold medal for the Soviet Union at the 1988 Seoul Summer Games while at the same time setting an Olympic record for the longest-ever throw at 84.80 meters, beating legend Yuriy Sedykh. Litvinov set an impressive three separate world records during his time as a professional and was one of only two throwers to ever break the 84-meter mark on a single throw, with his personal best of 86.04 meters set in 1986.

Paweł Fajdek is one of the greatest hammer throwers of the current generation. However, Fajedk has not seen much success at the Olympic Level, with only a single Bronze medal won at the 2012 London Games on his resume. Despite this shortcoming, Fajedk has shown dominance in other competitions, becoming a five-time World Champion, the most ever, being a six-time national champion, and winning two silver medals at the European Championships. Fajdek has been one of the best hammer throwers of the 2010s, and his personal best of 83.93 meters is 10th all-time.

Japanese-Romanian hammer thrower Koji Murofushi is one of the most accomplished athletes of his time. Murofushi started his dominance at the Asian Games, where he won two gold medals, one at the 1988 Bangkok games and one at the 2002 Busan games. He went on to shine internationally as he became an Olympic Gold Medalist after winning the hammer throw event at the 2004 Athens Summer Games and the 2011 Daegu World Championships. Koji Murofushi also has the distinction of having the 4th longest throw at 84.86 meters, a feat he accomplished in Prague in 2003.

Krisztián Pars was a beloved Hungarian hammer thrower. Despite allegations of doping that were eventually disproven, he persevered and became one of the greatest hammer throwers of his generation. Hungary’s love for Pars was highlighted by his eight-year-long streak of being voted Hungarian athlete of the Year from 2007-2015. The adoration of his homeland was justified as his success was undeniable, winning the Gold at the 2012 London Games hammer throw event and two European Championships at the 2012 Helsinki and 2014 Zürich games. Pars's resume has more than justified his status as one of the sport's greats.

Who is the best men’s hammer thrower in the world?

Yuriy Sedykh is the best hammer thrower of all time. Sedykh did more than enough to earn this title over his career, and his impressively long and accomplished resume proves this. Sedykh not only appeared in three Olympic games and won two gold medals but also holds the record for the longest throw in the sport at 86.74 meters which he set in 1986. These feats and much more help justify Yuriy Sedykh as the best hammer thrower of all time.

Who holds the world record in men’s hammer throw?

Yuriy Sedykh holds the world record for the longest hammer throw ever recorded. He accomplished this gargantuan feat in 1986 at Stuttgart; to this day, no man has ever broken the record of 86.74 meters. The only other person to even break 85 meters on a single throw besides Yuriy Sedykh is Sergey Litvinov, who threw 84.80 meters at the 1988 Games. This record is unlikely ever to be broken and was one of six world records set by Sedykh.

Which men’s hammer thrower holds the most Olympic gold medals?