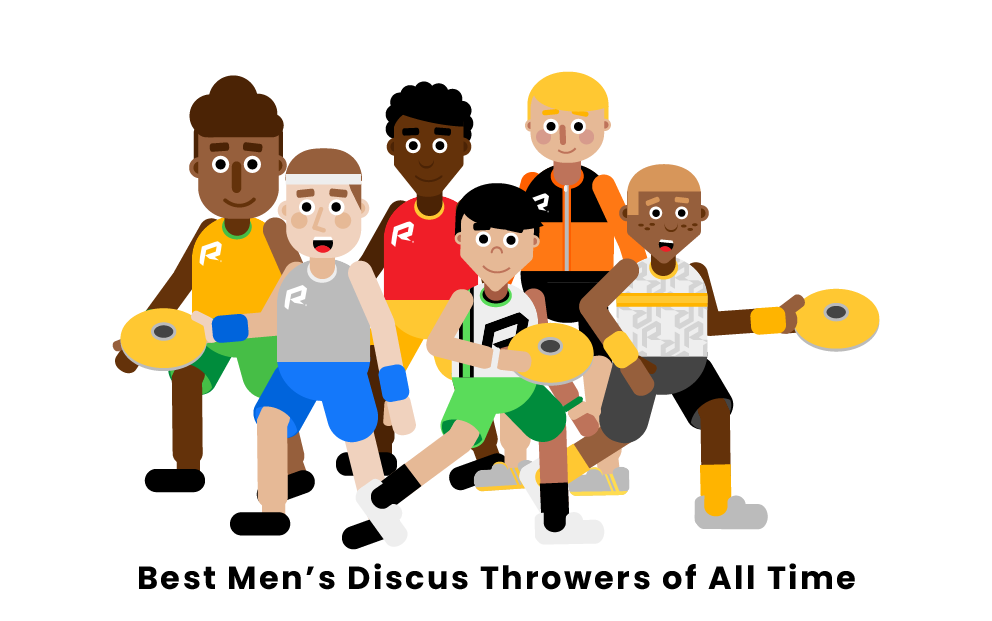 The discus throw has been around for centuries, dating back as far as ancient times when the Greeks began practicing the sport. Nowadays, world records have been set that would have amazed those who first threw discus. Being a top discus thrower requires world-class strength, but also the ability to optimally use one’s body motion and torque to launch the disc as far as possible. Below, the top six men’s discus throwers of all time are listed.

What are the best men’s discus throwers in the world?

Jurgen Schult is without question one of the greatest throwers to ever pick up a discus. In 1986, he set a world record with his 243-foot throw, a record that still stands today. He won gold at the Olympic Games in 1988 and followed that up with a silver medal in 1992. He also won a gold medal at the 1987 World Championships and added a silver at the same competition over a decade later, in 1999. In between, Schult also won two bronze medals at the World Championships and a gold, silver, and bronze at the European Championships.

Sporting one of the most complete resumes in all of throwing, Virgilijus Alekna was a force to be reckoned with in the discus circle. He won back-to-back Olympic gold medals in 2000 and 2004, and also won the bronze medal in 2008. Alekna was also extremely successful outside of Olympic play, winning two gold medals and two silver medals at the World Championships. He also boasts four gold medals at the World Athletics Finals and is a 12-time Golden League winner in discus, the most all-time by any man.

Competing well into his forties, Gerd Kanter is a staple of modern discus. In 2006, he moved to third all-time with his 73.38-meter throw at a competition in Sweden, but that’s far from the only accolade he has. He won gold at the 2008 Olympic Games and came back in 2012 to win the bronze. He also owns another gold medal from the 2007 World Championships, a competition that he has had marked success in. In addition to his gold, he also has two silvers and two bronze medals from the World Championships.

Daniel Stahl, one of Sweden’s greatest athletes ever, is currently tied for fourth on the all-time leaderboard, though he is still actively competing. Stahl won gold at his first-ever Olympic Games in 2021 and has also won countless international competitions. He took home a silver medal in the 2017 World Championships and won a gold medal in the 2019 version of the event. Stahl also has a silver medal from the European Championships, and in addition to discus, he has won a number of shot put and hammer throw competitions in Sweden.

Yuriy Dumchev may not have had the same career success as some of the other names on this list, but he was without a doubt one of the best discus throwers of his generation. He won 32 titles in his native country of Russia during his career and appeared in the Olympics twice, finishing in fifth and fourth place. When Dumchev set his personal best in May of 1983, it was a world record at the time. In addition, he was only 24 years old when he set the record, the youngest of anyone in the top nine of the all-time leaderboard.

Piotr Malachowski may be the last name on this list, but don’t be fooled into thinking he was anything short of a world-class thrower. He won silver at the 2008 Olympics and returned eight years later to do it again at the 2016 Olympics. He added a silver medal at the 2013 World Championships and claimed the gold medal at the 2015 World Championships. Malachowski had incredible durability, competing for over 21 years and winning 17 Diamond League titles in that time, the most ever by a men’s discus thrower.

Who is the best men’s discus thrower in the world?

The best men’s discus thrower in the world currently is Daniel Stahl. Stahl is tied for fourth all-time on the men’s world record leaderboard, but it would be no surprise if he seizes third outright by the time he’s done throwing. He is currently ranked number one in the world and had the farthest discus throw of 2021 at 71.40 meters, or 234 feet 3 inches.

Who holds the world record in men’s discus throw?

The world record holder in men’s discus throw is Jurgen Schult. Born in Germany, Schult set the record in 1986 in his home country, beating the previous world record by over seven feet. He has won a gold and a silver medal in his Olympics career and also has four medals total from the World Championships. Schult was also dominant in European competitions, winning the trifecta of a gold, silver, and bronze medal at the European Championships.

Which men’s discus thrower holds the most Olympic gold medals?

The men’s discus thrower with the most Olympic gold medals is Al Oerter with four. Though Oerter holds that record, he is only 38th all-time on the men’s world record leaderboard. He competed at a time when discus was not quite as competitive, but his four-consecutive golds are impressive nonetheless. Oerter was 44 at the time of setting his personal-best mark of 69.46 meters (or 227 feet 10 inches), by far the oldest record holder ever among the top 40.