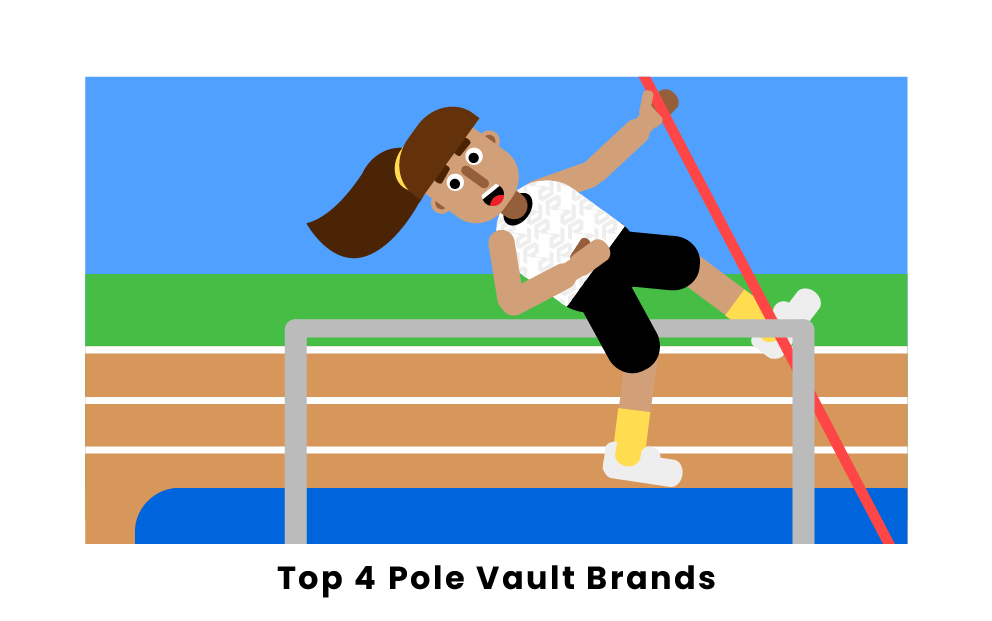 What are the most popular pole vault brands?

Essx is top-of-the-line when it comes to pole vaulting. It is one of the premier brands trusted by professionals across the globe these days, and its users include World Championship competitors Valentin Lavillenie (Frace) and Emily Grove (USA), and World Champions Sam Kendricks (USA) and Paweł Wojciechowski (Poland).

Essx has several lines of poles, with their most recent being the Launch series. The Launch features a redesigned 100% fiberglass pole that offers a smaller diameter and lighter carry weight than traditional fiberglass poles, feeling closer to how a carbon pole would. The Launch is available in all sizes starting from a test weight of 60 lbs. and going all the way up in 5 pound increments to 150 lbs.

Essx also produces the Recoil Advanced, which they call the most Vaulter-Friendly pole on the market. Unlike the Launch, it is a carbon-fiber pole, meaning that its stronger for its size and returns more energy when used by elite vaulters.2

Gill Athletics’ line of Pacer poles provide some of the more consistent performances for pole vaulters, and have been trusted for years. Pacer poles are the preferred line of pole for many athletes, from highschoolers to Olympians.

There are three different vaulting poles in Pacer’s line up: The PacerFX, the Pacer One, and the Pacer Composite. The FX is Pacer’s flagship pole today. It is Gill’s best-selling and highest quality pole, whereas the Pacer One is a more economic pole intended for beginners and intermediates.

The Pacer One and Pacer FX are both fiberglass poles, while the Pacer Composite is built with a mix of fiberglass and carbon fiber.

Altius Pole Vaulting has been trusted by professionals since 1990, and currently has four different pole models: the Fiberglass, the Carbon Extreme, Carbon Elite, and the Suhr Adrenaline. Their newest model, the Suhr Adrenaline, was designed with the help of Jenn Suhr, multiple-time U.S. vaulting champion and World Championship silver medalist. The Adrenaline is a hybrid carbon pole that is lighter, thinner, and more forgiving than Altius’ more traditional models (and older fiberglass poles). The Adrenaline has been used by countless high school state and national champions.

Owned and operated by Carl and Jeff Erickson (two track coaches at Baylor and Stephen Austin University), Altius is run by pole vaulting experts, and it is a brand you can trust.

UCS poles was established in 1987, and since then it has been dedicated to producing the finest craft in the business. In ‘87, the year of its founding, UCS made an immediate impact, being the pole of the winner of the NCAA Championships that year. The pole-of-choice for a total of 7 record-breaking vaults for American, Swedish, German, and other international vaulters, the UCS Spirit has a long tradition of success.

The UCS Spirit pole is known for consistent performance and its “Energy Memory,” giving the vaulter greater energy return with each vault than many competing poles. Along with Essx, Gill, and Altius, it is one of the few vaulting brands that top competitors trust to make their poles.