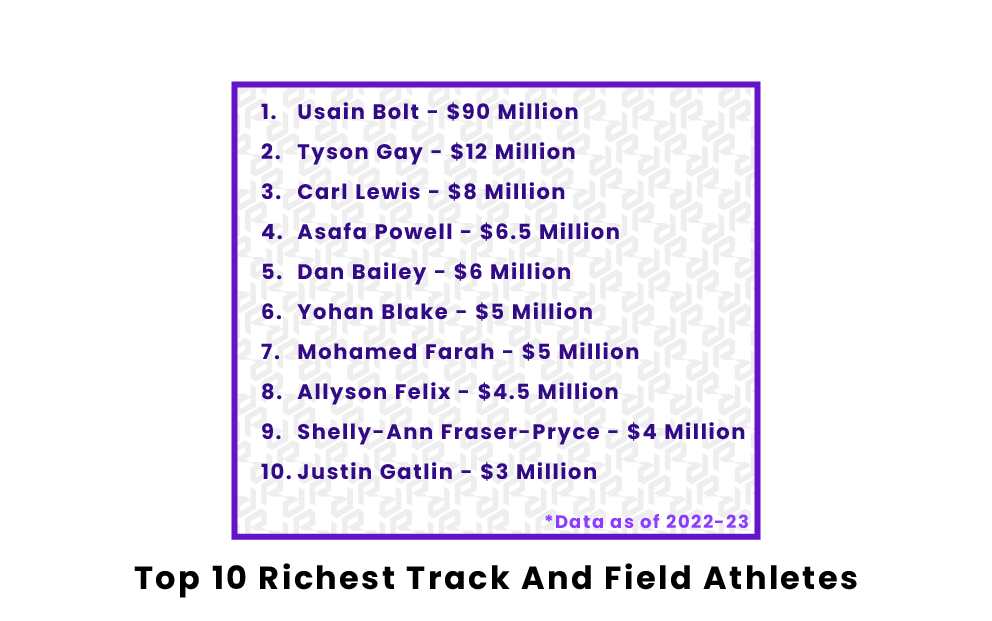 Track and field is one of the most riveting sports to watch. Whether it be the Olympics or other international competitions, you can always expect a few nail-bitingly close races. Due to the popularity of the sport, it’s no surprise that these athletes earn a sizable income. Below are the ten richest track and field athletes in the world.

Who are the richest track and fielders in the world?

Usain Bolt is currently the richest track and field athlete in the world, with an estimated net worth of around $90 million. Bolt currently holds the record for the 100-meter and 200-meter sprints. The majority of Bolt’s income comes from brand deals and other endorsements. One of his biggest endorsements is from the German shoe company Puma. Additionally, he has sponsorships from Visa, Gatorade, and Nissan. Bolt wrote an autobiography in 2010, which earned him a multi-million dollar advance from HarperCollins. Lastly, Bolt earns income from competing in international track and field competitions, where he earns anywhere from $250,000 to $500,000.

Tyson Gay currently has a net worth of $12 million. Born to a family of sprinters, Gay helped the University of Arkansas earn their first NCAA 100m champion. Most of Gay’s net worth comes from endorsements and other brand collaborations prior to his controversies. Additionally, some of Gay’s income came from competing in international track and field competitions. The estimated income from these competitions is between $3-5 million. Due to Gay’s success at the Olympics, his net worth also grew exponentially. In 2016, Gay purchased a $150,000 home in Kentucky as well as a house in Florida for $750,000.

Carl Lewis has a net worth of $8 million. Lewis is a retired track and field athlete who competed mostly in the 1980s and 1990s. During the height of his career, Lewis won nine gold medals at the Olympics and has won ten World Championship medals. Despite his fame, Lewis was never offered as many endorsement deals as he should have been. In 1984, he earned $500,000 from endorsements. He won tournament prizes of $750,000 and $200,000 from public appearances. Lewis did sign endorsements with TAG/Heuer, U.S. Mint, and Disney. Lewis also earned anywhere from $30,000 to $50,000 for each appearance at various track and field events.

Asafa Powell has a net worth of $6.5 million. Much of Powell’s net worth has come from his career as a sprinter. Powell ran the 100m and held the record from 2005 to 2008. Powell earned a sponsorship from Puma in 2015. As part of his endorsement deal with Puma, Powell was part of their marketing campaign through his promotion of running training products and other brand campaigns during the 2016 Rio Olympics. Powell also had his own line of athletic wear and competition spikes. Powell’s line was called “Sub-10 King” in reference to Powell’s sub-10 second 100m sprint time.

Dan Bailey currently has a net worth of $6 million. Born in Antigua and Barbuda, Bailey received $4,000 monthly from the government’s treasury for about 23 months to put towards his training during his time as a sports ambassador. Much of Bailey’s income also came from competing in various track and field competitions as well as the Olympics. Much of Bailey’s career was funded through his Adidas sponsorship as well as prizes from different competitions. Bailey also worked as a coach for the Ministry of Sports. Bailey also received $20,000 to treat sports injuries from the Antiguan government. Despite some financial assistance from the government, Bailey funded most of his career, including travel and training expenses, on his own.

Yohan Blake currently has a net worth of $5 million. Blake was the youngest 100m runner to win the World Championships in 2011 and was part of the Jamaican Olympics team in 2012. During his time at the Olympics, Blake won silver medals in the 100m and 200m sprints, as well as a gold medal as part of the 4 x 100m relay. Much of Blake’s income comes from his time as part of the Olympic team and from winning various international track and field competitions. Blake is often considered the second-fastest man in the world, and his athletic prowess has contributed greatly to his net worth.

Mohamed Farah currently has a net worth of $5 million. Farah won gold medals at the 2012 and 2016 Olympics in the 5000m and 10,000m races. Farah is often considered one of the most successful British runners. He is also the second runner to win consecutive gold medals in distance events. Farah’s success has also earned him endorsements from Louis Vuitton, Hyundai, Nike, PACE, Sports Magazine, Bupa, and Virgin Media. Farah’s contract with Nike has even earned him a six-figure salary. Farah also earns more than $300,000 for each marathon exhibition he runs. Farah is estimated to earn another nearly $12 million over the next two years of his career.

Allyson Felix currently has an estimated net worth of $4.5 million. Felix has won eleven medals over five consecutive Olympics games. Felix’s college education was paid for by Adidas, and she graduated from the University of Southern California with a teaching degree. She is considered the most decorated US track and field athlete. Felix briefly had an endorsement from Nike. Afterwards, Felix signed with Athleta and launched a new shoe brand, Saysh. Due to the longevity of her career, most of Felix’s income is earned through competing in various track and field competitions as well as from competing in the Olympics.

Shelly-Ann Fraser-Pryce currently has a net worth of $4 million. Fraser-Pryce is the third-fastest woman in the 100m races. She was also the first Jamaican woman to win the 100m race at the Beijing Olympics in 2008. Fraser-Pryce earns most of her income from international track and field competitions. She also has a sponsorship with Puma, which is her biggest endorsement deal. Fraser-Pryce also founded the Pocket Rocket Foundation. The goal of the foundation is to provide scholarships to high school student-athletes who compete in different sports. Fraser-Pryce was named UNICEF’s National Goodwill Ambassador in 2010, which makes her Jamaica’s first.

Justin Gatlin currently has a net worth of $3 million. Gatlin won a gold and bronze medal during the 2004 Olympics and won two gold medals at the World Championships and World Indoor Championships. Gatlin earned 2 million yen on a Japanese game show. Gatlin has an endorsement deal with Nike and previously had a sponsorship with the Chinese company Xtep. Gatlin signed a one-year deal with the Florida restaurant Crispers. Most of his obligations came from social media marketing and appearances. Gatlin has earned most of his income from competing in the Olympics and various international track and field competitions.

Who is the richest men’s track and field athlete in the world?

The richest men’s track and field athlete in the world is Usain Bolt. Bolt currently has an estimated net worth of $90 million. Most of Bolt’s income comes from competing in international track and field competitions as well as the Olympics. Additionally, some of Bolt’s income comes from sponsorships. He has several endorsement deals, including with Visa, Gatorade, and Nissan.

Who is the richest women’s track and field athlete in the world?