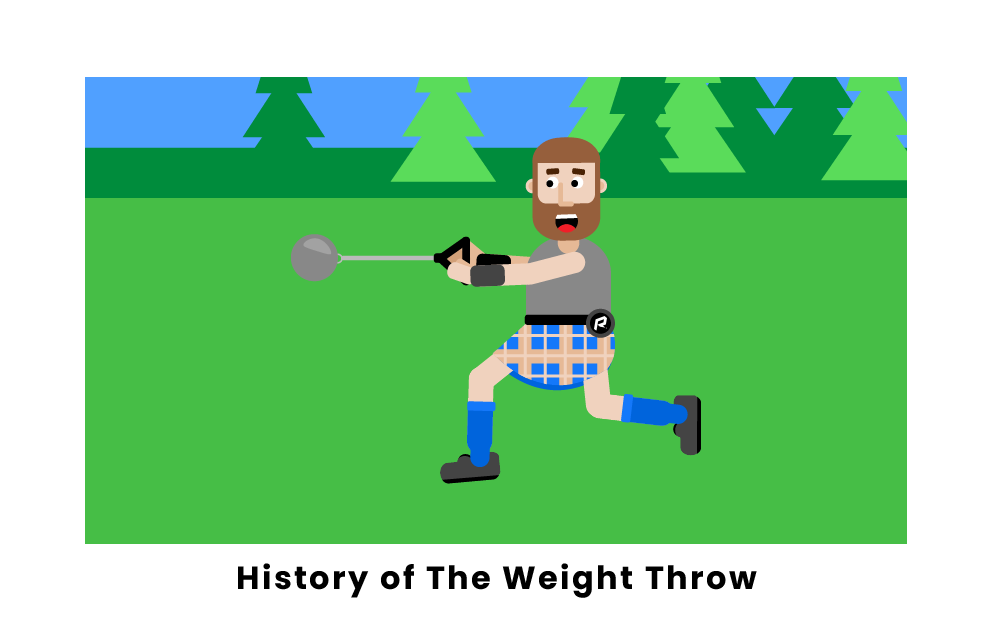 Have you ever wondered about the origins of the weight throw? In recent years, the weight throw event has reappeared in high school field events. However, this was not always the case. For a long time, the weight throw was a relatively unknown sport. So, where and when did this ancient sports event originate?

The Origins of the Weight Throw

The weight throw is an event that originated from the Scottish Highland Games. It is believed that the games can trace their roots all the way back to 2000 BC in Ancient Ireland. As the story goes, a legendary Celtic warrior named Cuchulainn hurled a chariot wheel a great distance by gaining momentum from swinging it around his head. To throw the wheel, Culchulainn gripped the wheel by its axle, a form that inspired the construction of weight throw hammers in the future. During the 300s and 400s AD, the Scotti people migrated to the land of modern-day Scotland, bringing the original concept of the Highland Games with them. From then on, the concept of the Highland Games began to evolve into an important part of early Scottish society and culture.

Over the centuries, the Highland Games grew in formality and importance. The earliest continual Highlands Games were held in Fife, known as the Ceres games. The Ceres games began in 1314. As the games gained official acceptance and popularity, they became an important symbol for Scottish culture. In the mid-1700s, following the Jacobite uprising, England enacted the 1746 Proscription Acts, quelling the Scottish cultural identity. It wasn’t until 1782 that the Proscription Acts eased, allowing Scottsmen to return to public Highland Games. In the following decades, the Highland Games made a resurgence, gaining popularity and international support.

As Scottish people migrated around the world, they brought their traditions with them. The first Highlands Games event held in the United States occurred in New York in 1836. From then on, the Highland Games drew more popularity and participation in America, bringing the weight throw event with it.

While the weight throw was a staple event in the Highland Games, it only appeared in the Olympic games twice in history. The 1904 and the 1920 Olympics saw the inclusion of the weight throw in the track and field portion of the games. However, the hammer throw, a very similar event that uses different weight regulations, was more popular throughout the remainder of the 1900s. Only recently has the weight throw seen a resurgence in popularity as it has been included in more high school track and field events across multiple states.

What is the history of Weight Throw?

The weight throw is one of the oldest sporting events, tracing its roots to 2000 BC in ancient Ireland. Following the migration of the Scotti people from Ireland to Scotland from 300 AD - 500 AD, the Highland Games were established, creating the framework for the modern-day weight throw. The weight throw appeared in the 1904 Olympics for the first time and later in the 1920 Olympics. The event has yet to reappear in the Olympic Games. During the 1900s, the weight throw declined in popularity as the hammer throw, a similar variant, gained in popularity. In recent years, the weight throw has seen a resurgence in the United States in high school track and field events.

While it is unknown who created the modern weight throw in the Scottish Highland Games, its roots can be traced to 2000 BC in ancient Ireland. At this time, the ancient Celtic warrior Culchulainn hurled a chariot wheel, gripping it from its axle, after swinging the wheel around his head. This story is the oldest possible link to the modern weight throw event that appeared in the 1904 and the 1920 Olympic games.

Where did Weight Throw start?