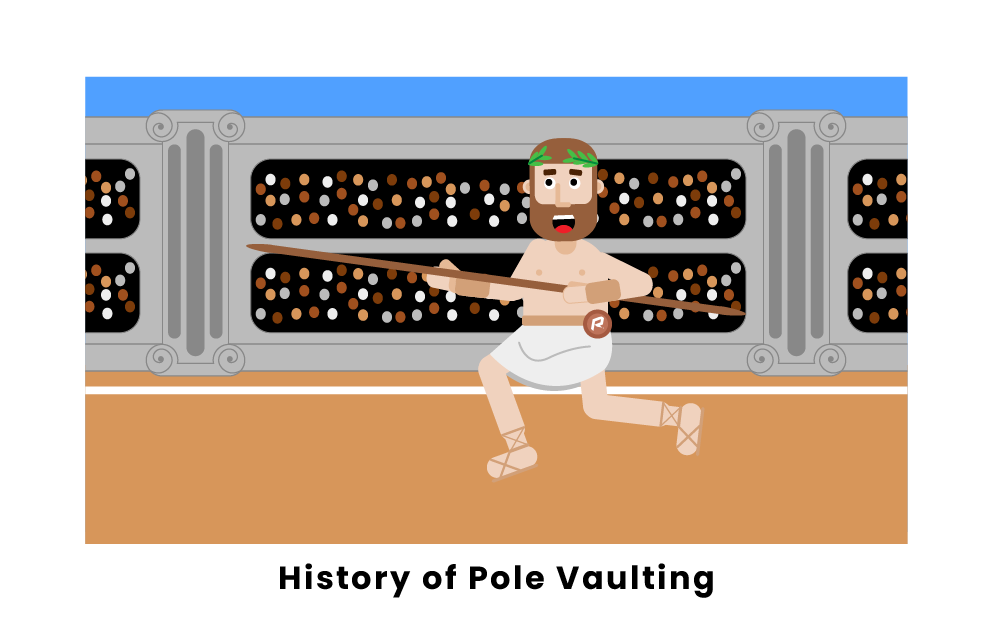 Pole vaulting is one of the most mesmerizing sports to watch. Athletes defy gravity, lifting themselves high into the air only to come crashing back down. Their form must be flawless and their strength otherworldly to pull off winning vaults. Pole vaulting can trace its origins back all the way to Ancient Greece, though the event has undergone a number of changes since then. Keep reading to learn about the history of pole vault.

The origins of pole vaulting actually date back to ancient Greece, though at that time, it was more of an activity than an organized sport. Ancient Greeks, as well as members of other cultures, would use long poles to vault themselves up and over objects, but did so either for fun or when necessary, such as needing to get on top of a tall structure. Despite knowing this skill, pole vaulting was not included in any of the ancient Greek Olympiads. Still, this use of poles served as the foundation for the modern sport.

Following the Ancient Greeks, the next records of pole vaulting come from the 16th century. People in England would use poles to launch themselves across gaps, such as rivers and streams. Though friendly competitions would occur, at this point, pole vaulting was still not an organized sport and remained a practical means of transportation.

In the 1800s, pole vaulting finally claimed its official sport status. 1812 marked the first-ever organized competition when an event was held in England, a popular place for vaulting at the time. Later in the century, a gymnastic association in Germany adopted the activity and began practicing it as well as holding competitions. These early competitions featured wooden poles made of hickory or ash, and athletes would vault themselves over a bar, much like in the event today.

By the end of the century, pole vaulting had become popular across the globe. It was included as one of the original events in the first Olympic Games in 1896 and has been a part of the Games ever since. For women, pole vaulting has been a medaling event since the 2000 Games. Poles today are made of fiberglass, providing vaulters with an ideal balance of strength and weight. Though the equipment used and heights vaulted have evolved a lot since ancient times, the same goal still remains of using a pole to clear the tallest height possible.

1812: The first-ever organized pole vaulting competition was held this year in England. Vaulting had been very popular in England as a means of transportation, as the marshes and swamps of the country had numerous canals and streams that needed to be crossed. People would use poles to leap these distances, and the first competitions attempted to see who could cross the furthest distance.

1850s: A German gymnastics association adopted pole-vaulting into their program, and the sport began to gain traction in Europe. As more athletes were exposed to pole vaulting and began practicing it, the sport grew in popularity and spread to other regions.

1896: At the first-ever Olympic Games, pole vaulting was included as one of the original track and field events. The first man to take home a gold medal in the event was American vaulter William Welles Hoyt, who cleared a height of 3.30 meters, or 10 feet 10 inches.

2000: The 2000 Summer Olympics marked the first time women were allowed to compete in pole vaulting. The first-ever gold medalist was American Stacey Dragila, who cleared 4.60 meters, or 15 feet 1 inch. The competition was actually extremely tight, prompting an explosion in the popularity of vaulting for women.

2009: Not long after pole vaulting became an Olympic sport for women, Russian athlete Yelena Isinbayeva cleared a record height of 5.06 meters, or 16 feet 7 inches. Isinbayeva set the Olympic record at 5.05 the year before in just the third Games ever that women pole vaulters were allowed to compete. Her vault in 2009 still stands as the world record.

What is the history of pole vaulting?

Pole vaulting has origins in ancient Greek culture, when people would use poles to vault themselves over objects or on top of tall structures. As time went on, the practice became popular in 19th Century England, where people used poles to launch themselves across canals or streams. By the end of the century, pole vaulting had become a popular sport, and was included in the first-ever Olympic Games in 1896.

There is no clear inventor of pole vaulting, as the activity was more of a practical means of transportation rather than a sport at its inception. However, the use of a pole for clearing heights can first be seen in ancient Greece. Pole vaulting competitions first appeared in England in 1812, and the sport began gaining traction in Europe in the mid-19th century as it was adopted into gymnastics programs.

Where did pole vaulting start?

Pole vaulting started in ancient Greece. There are actually paintings that exist from the time period which show people holding large poles in the same way that modern vaulters do, pointing towards this era as the beginning of vaulting. However, pole vaulting was not recognized as a sport by the ancient Greeks. Organized competitions for the event began in England in the early 1800s, where pole vaulting remains popular to this day.