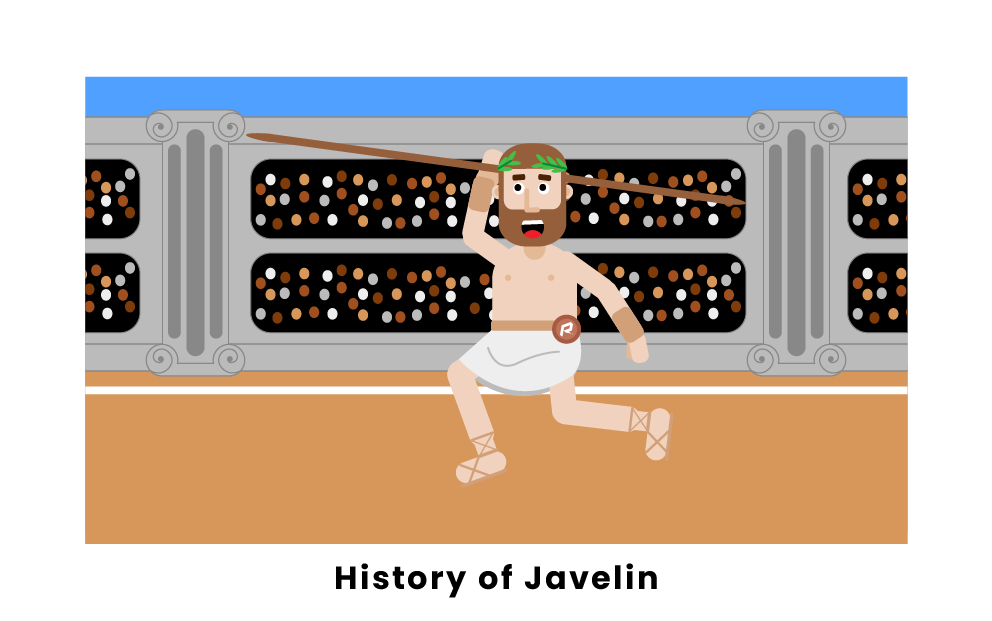 The history of the javelin throw stretches as far back as recorded human history goes, with origins from techniques used by hunters to kill their prey. Since ancient times, the sport of javelin has seen a number of transformations, though the main principles of the game remain the same: throw the spear as far as possible. Keep reading to learn more about the history of javelin and how the sport has evolved.

The history of the javelin started not as a sport, but rather as a means of acquiring food. Ancient hunters would throw spears at their prey to wound or kill them, setting the basis for javelin becoming what it is today. Spears were also used in ancient warfare, and soldiers who could throw their spears harder and farther had an advantage. In ancient Greece, the practice of throwing spears became very popular as an activity and competition. Javelin was included as part of the first-ever pentathlon at the ancient Greek Olympiad in 708 B.C. and remained a widely-practiced sport for many years.

After ancient times, the popularity of javelin somewhat died out, and there is very little recorded activity of the sport until the 19th century. In 1840, the first recorded modern pentathlon was held in Shropshire, England, and one of the events featured was javelin throwing. As pentathlons and similar competitions became more ingrained in sporting culture, the popularity of javelin began to rise again. By the 1880s, events including javelin were held all across Europe and the United States.

By the turn of the century, javelin was being practiced by athletes all over the world. At the 1908 Olympic Games, javelin was introduced for the first time. The event was also included in the second-ever Olympic Games in which women could compete in 1932. At this point, javelins were made of wood and had a steel tip that promoted a nosedive in trajectory, ensuring a landing that stuck the spear into the ground.

In 1950, American thrower Bud Held and his brother Dick designed a new steel javelin that was more aerodynamic and also hollow. These new designs flew much farther, but with less weight in the front they had more of a tendency to land flat, making it hard to precisely measure distances and also posing a safety risk as javelins would bounce and fly off the ground.

In 1986, a solution to this problem was created. A newly-designed javelin featured a center of gravity that was shifted more towards the front end of the spear, causing throws to land at a steeper angle and stick in the ground. This change also reduced distances by about ten percent, a welcome byproduct given that the world’s best throwers were nearly launching their javelins past the entire landing area at times.

Armed with the new-and-improved javelins, throwers got back to competing. When looking at world records for javelin, only records set with the new javelin are used, since it is harder to throw than the old design. Much like in the 19th century, many of the world’s top throwers today are European.

708 BC: This was the first ancient Greek Olympiad that javelin was introduced at. The event was included as part of the first-ever pentathlon.

1840: After fading out of the sporting spotlight, javelin returned in 1840 when the first modern pentathlon was held in Shropshire, England.

1908: At the third modern Olympic Games, javelin was included as an event for the men. The first-ever gold medalist was Eric Lemming from Sweden.

1932: In this year at the second Olympic Games that women were allowed to compete in, javelin was introduced as a medal event. The first woman to win the gold was Babe Didrickson from the United States.

1950: After traditionally using wooden javelins, American throw Bud Held and his brother Dick designed a new javelin that was made of steel and was hollow. These new spears flew much farther than older designs, but were more likely to have flat landings that didn’t stick in the ground.

1986: After dealing with countless bad landings, the javelin was once again redesigned in 1986. The center of gravity was shifted towards the front, promoting a steeper trajectory that saw more landings stuck as well as a decrease in distance.

What is the history of Javelin?

The history of javelin goes as far back as ancient hunter-gatherers. The practice of throwing a spear to kill prey was adopted into warfare, where soldiers would throw long spears at their enemies. In ancient Greece, the activity became popular as a game, and it was a part of the first pentathlon held in 708 B.C. Two thousand years later, javelin was introduced to the Olympic Games in 1908 for men, and in 1932 it was introduced for the women. Nowadays, it is one of the most popular Olympic sports and is part of the decathlon and heptathlon.

There is no specific person who can be credited with inventing javelin. However, there are a pair of names that can be credited with designing the modern javelin that we see today. In 1950, American thrower Bud Held and his brother Dick created a new javelin that was made of steel. This javelin was hollow and also more aerodynamic than the older design, and it flew much farther than anything used beforehand. The design was slightly altered in 1986 to promote steeper landings and decrease distance as well.

Where did Javelin start?

The organized practice of javelin first began in ancient Greece. As one of the more popular activities of the time, javelin was included in the first-ever pentathlon that was held at the Greek Olympiad in 708 B.C. The ancient version of the event looked very similar to what is seen today, with athletes throwing a long spear as far as they could down a designated landing area. The modern inclusion of javelin was first seen in England, and the sport became very widespread in Europe by the 1880s.

Pages Related to History of Javelin