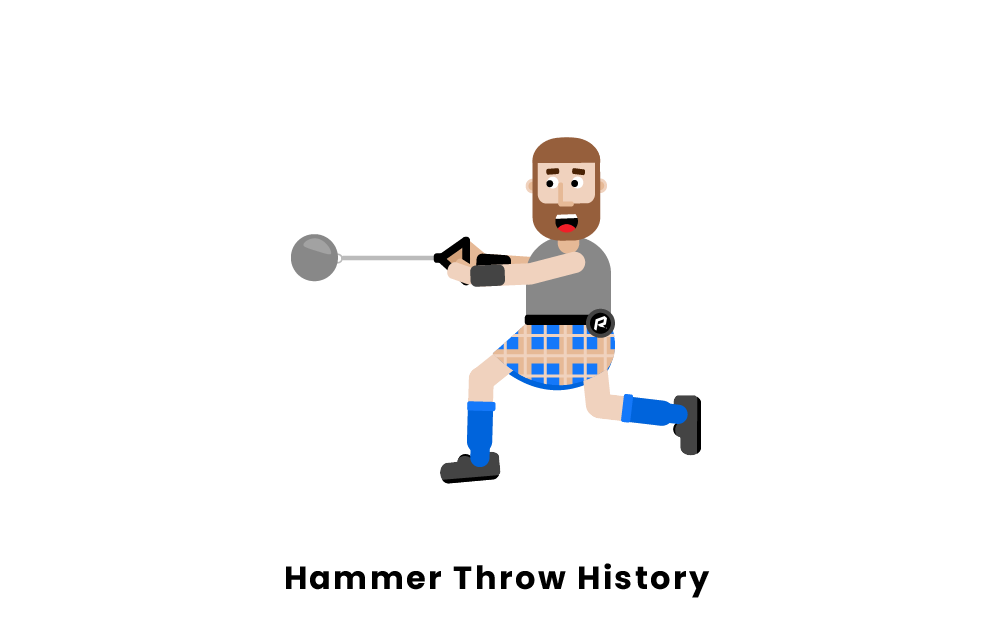 The hammer throw is a historical and medieval game that has more recently joined the Olympics (1900 for men and 2000 for women.) It is an event that requires strength, persistence, and momentum.

Hammer throwing is a sport that can be traced back to around 2000 BC at the Tailteann Games in Tara, Ireland. The games included an event in which a warrior grabbed a chariot wheel by its axle and threw it as far as they could. The wheel was then replaced by a boulder attached to a wooden handle, and later, it was changed to a metal ball that was attached to a steel wire and a ring to grip. Presently, for men, the metal ball weighs 16 pounds, and for women, it weighs 8.8 pounds. The wire is also a different length for males and females; it is 117.5-121.5 cm for men and 116-119.5 cm for women. It is also believed that soldiers in the war for Scottish independence played the game because King Edward I had made the use of weaponry illegal.

When throwing the hammer, the athlete must first grip the circle at the end of the medal cord with both of their hands. Then the athlete stands at the back of the throwing circle, which is seven feet in diameter, with their back towards where they want to throw the hammer. To create momentum, the athlete swings it over their head, then does a series of three to four turns, and releases the hammer at their highest point.

The hammer throw was first added to the competition for men at the 1900 Paris Olympic Games and 100 years later for women at the 2000 Sydney Olympic Games. In the Olympic Games, it became the third throwing event in track and field, alongside shot put and discus throw.

The IAAF, or International Associations of Athletic Federation, oversees the hammer throw outside of the Olympics. The hammer throw is also included in the World Championships, Asian Games, and the Commonwealth Games.

Yuriy Sedykh of the Soviet Union holds the hammer throw world record of 86.76 meters. The women’s world record is held by Betty Heidler from Germany. She threw the hammer 79.42 meters.

What is the history of hammer throw?

The hammer throw has been a part of track and field competitions in England, Scotland, and Ireland since 1866. These hammers were made of iron and wooden handles between 3 and 3.5 feet long. To compete in this event, the athlete must swing the hammer over their head and throw it from a standing position. At this time in history, the longest distances the hammer was thrown to were around 130 to 140 feet.

Who invented the hammer throw?

The hammer throw was allegedly invented when the mythical Celtic hero Cú Chulainn picked up a wooden chariot wheel by its axle, spun it around over his head, and threw it farther than any other person could. At this time, among the Teutonic tribes, hammer throwing was practiced to honor the God Thor during religious festivals.

Where did hammer throw start?

The hammer throw can be traced back to the British Isles. The first hammer throw competition took place at the Tailteann Games. These games were held in Ireland in about 2000 BC. This was allegedly when Cú Chulainn grabbed a chariot wheel by its axle. He then spun it around his head and was able to throw it farther than anyone else could.