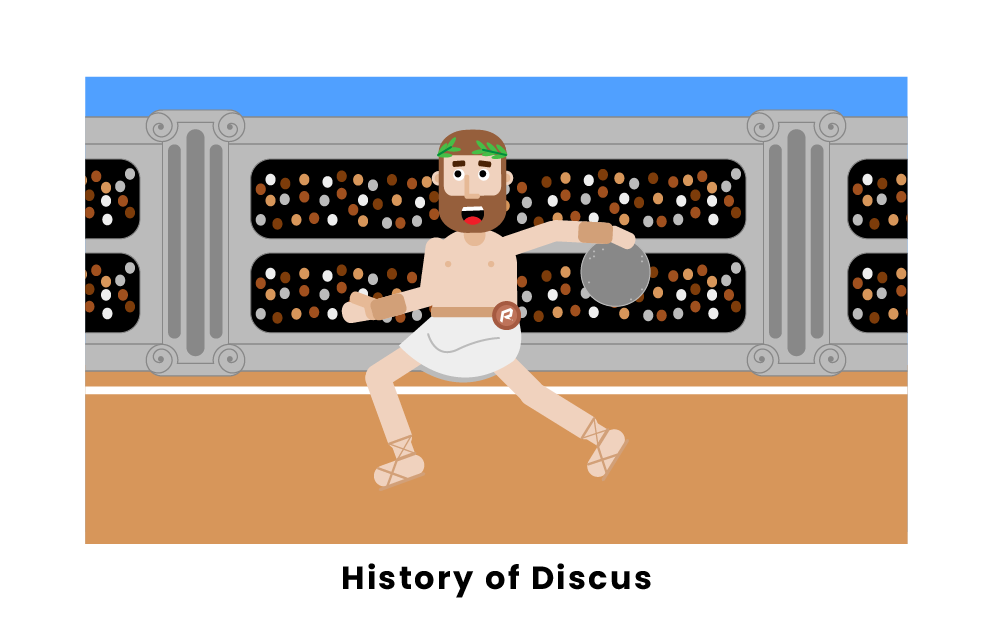 Discus is a sport that can trace its history as far back as ancient times. Requiring impressive strength and perfected technique, achieving a great discus throw is no easy feat. As the sport has evolved, so has the equipment and form used, leading to distances that continue to shock and amaze. Keep reading to learn more about the history of discus.

Discus is one of the oldest sports in the world, with its origins dating back to ancient Greece. As far back as 800 BC, records can be seen of people participating in the event. The activity was particularly popular and was part of the ancient Greek pentathlon (a track and field competition consisting of five events). In ancient times, throwing a discus was thought to display an athlete’s innate strength and fine motor control. Greek competitors would inscribe their discuses and dedicate their throws to a Greek god before the event.

Although discus began nearly three thousand years ago, the modern form of the sport was founded in 1870 by German professor Christian Georg Kohlrausch and a group of his students. Kohlrausch resurrected the discus throw and revived the organized competition of the event. At the first-ever modern Olympic Games in 1896, discus was included as an original track and field event. In addition, discus was a part of the first set of events that women competed in at the 1928 Games, the first-ever Olympics in which women were allowed to participate.

When modern competitions began to rise in the late 19th century, discus looked very similar to its ancient version. Athletes would attempt to launch a disc as far as possible into a designated landing area, and the owner of the longest throw would win the event. Like in ancient Greece, the discs were made of iron or bronze and were circular in shape.

Though the form and function of discus may not have changed much from the first Greek Olympics to the first Olympic Games, the event has seen some changes in the last century. When the event was first created, athletes would simply turn and coil their bodies before releasing the disc. However, at the 1900 Olympic Games, a new technique was created by Czech athlete Frantisek Janda-Suk. Janda-Suk was the first competitor to throw the disc while rotating his entire body, earning him a silver medal at the Games. Since then, this has been the form used by all discus throwers. Usually, a competitor spins one-and-a-half times before throwing the disc, allowing them to build up more momentum and launch their discs farther. In addition, discs nowadays are made of fiberglass or lightweight metal and weigh two kilograms for men and one kilogram for women, much lighter than the iron discs used before.

776 BC: The year of the first ancient Greek Olympics. It is thought that discus was one of the original events at these Olympics, with records dating back to 800 BC.

1870: It was during this year that German professor Christian Georg Kohlrausch revived the sport of discus and brought it to the modern age. Along with the help of his students, Kohlrausch revitalized the sport, and organized events began popping up all over Europe. By the late 1800s, discus was very much a part of the sporting scene.

1896: This was the year of the first-ever modern Olympic Games. Discus was on the original track and field events included at the Olympics, though to begin, the competition was limited just to men. The first gold medalist in the event was American Bob Garrett.

1928: This year’s Summer Olympics in Amsterdam marked the first time women were ever allowed to compete. At these Olympics, discus was included as one of the original events, and the first-ever women’s gold medalist was Polish athlete Halina Konopacka.

1986: On June 6th in Neubrandenburg, German athlete Jurgen Schult set the men’s world record with a 74.08 meter (or 243-foot) throw. Schult had a very decorated career, winning a gold medal at the 1988 Summer Olympics and a silver medal in 1992. Schult also won both a gold and silver medal at the World Championships.

1988: On July 9th, also in Neubrandenburg, fellow German athlete Gabriele Reinsch set the women’s world record with a 76.80 meter (or 252-foot) throw. Though Reinsch set the record that day, she only ever qualified for one Olympic Games, placing seventh the same year of her world-record heave. Still, Reinsch’s record stands to this day as the best ever for a woman.

What is the history of Discus?

The first recorded history of discus comes from the ancient Greek poet Homer in 800 BC. After being enjoyed as one of the most popular sports in Greece, discus was resurrected in 1870 by German professor Christian Georg Kohlrausch. It was included in the first-ever modern Olympic Games in 1896, and has been a staple in track and field for the past century.

Discus was created by the ancient Greeks, though there is no record of a specific name to credit its origin to. One name that can be credited with helping the inclusion of discus into modern sporting culture is Kohlrausch. Before he and his students brought back the game in 1870, the sport had somewhat died out, but after his efforts, it returned, looking much like the ancient event, and was included in the first modern Olympic Games.

Where did Discus start?

Discus started in ancient Greece. The Greeks were the first to play discus, so it’s no surprise that three of the top six finishers in the event at the 1896 Olympics were from Greece. The sport was created to showcase an athlete’s incredible strength and motor skills. Ancient competitors would dedicate their discs to a Greek god before throwing, and the sport was very popular in Greek culture.

Pages Related to History of Discus