What Does Game, Set, Match Mean In Tennis? 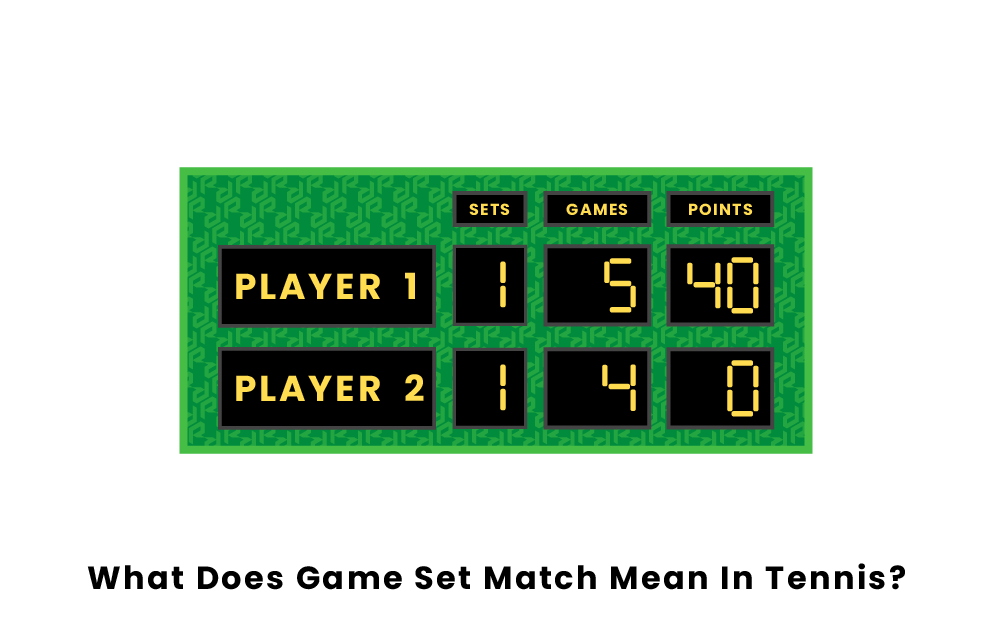 In the example above, Player A is one point away from winning the game in the third set. This is called match point. If Player A wins this game, the third set is over. As a result of winning that game, they would have won the set 6-4. In a two out of three set match, Player A wins the match if another game is won. If that were to happen, the official would say “game, set, match” to indicate that Player A officially won the match.

In table tennis, the term “game, set, match” is not used. In fact, table tennis actually doesn’t use sets in their scoring system at all. That being said, it is standard practice to say “game point” prior to a serve that could end up being the last of the game.

How does game scoring work in tennis?

The scoring system in tennis is unique compared to most other sports. Points within a game are denoted by the intervals 15, 30, 40 instead of simply 1, 2, and 3. For example, both players will start out at 0-0; this is known as “love-all.” The server’s points are always called out first, and the receiver’s points second. When one player scores, the score will be called 15 to love, meaning 15-0. If the opponent scores second, the score will be called 15-all, meaning the two sides are tied. The next point will be called 30 and the point after that 40. The player who scores another point after reaching 40 wins the game unless the score is tied at 40. If the two sides are tied at 40, called a deuce, the player that scores first has the advantage. To break the tie, one person must win two consecutive points to win the game. After one side wins the game, the score will be reset, and the next game will be played.

What does “love” mean in tennis?

In tennis, the term “love” is used to describe a score of zero. Therefore, every tennis match starts as love-all. Furthermore, if the server is losing by a score of 0-15, they would call the score “love-15.” There are a few different beliefs as to why this term exists in tennis. One popular theory is that the term love is used because of its close resemblance to the French word for egg, “l’oeuf.” The reasoning behind this concept is that eggs resemble the number zero, and the pronunciation of “l’oeuf” is similar to the pronunciation of the English word “love.”

Pages Related to What Does Game, Set, Match Mean In Tennis?