What Are The Best Wimbledon Tennis Matches Ever Played? 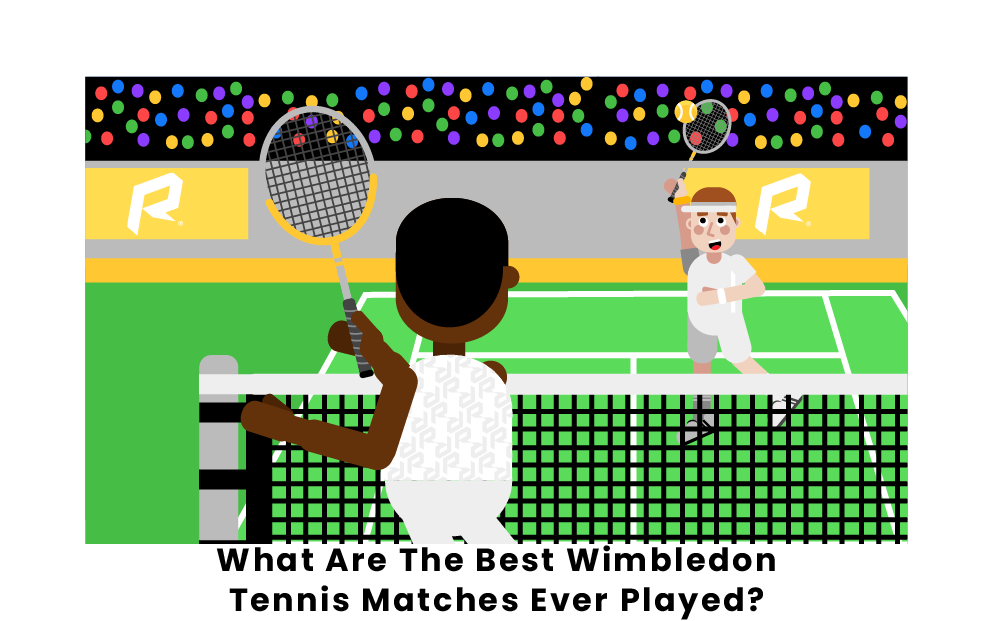 Established in 1877, Wimbledon has seen some of the greatest moments in tennis history. The mandatory all-white uniforms, the elegance of the tennis village, and the roaring energy of the Centre Court are all aspects that contribute to creating the magic of Wimbledon.

Over the years, all-time greats such as Roger Federer, Rafael Nadal, Serena Williams, and Martina Navratilova have all triumphed at Wimbledon. Being the only Grand Slam event played on grass, the level of competition during the tournament has given sports fans some unforgettable moments. Keep reading to learn about some of the best Wimbledon matches ever played.

On July 6th, 2008, Rafael Nadal and Roger Federer met for the third consecutive year for the Men’s Singles Final at the All England Club. The hype around the game was unprecedented as Roger Federer had beaten Rafael Nadal in the previous two finals. The match was also the fourth final of the year between the two, as Nadal had won against Federer in Monte Carlo, Hamburg, and at the Roland Garros.

Following the finals in 2006 and 2007, Roger Federer had established himself as one of the best ever while still being only 27 years old. Rafael Nadal was just 21 years old and needed the Wimbledon crown to show that he was more than just a clay master. The two had dominated the tournament, as they won almost every match leading up to the final in three sets, setting up a highly contested matchup.

The match proved to be even more intense than expected, as the two battled it out for four hours and forty-eight minutes, the longest Wimbledon Men’s Singles Final at the time. Multiple interruptions caused by the rain made the match even more legendary, as Nadal eventually closed out the game in the fifth set after missing multiple points. Throughout the years, Wimbledon has seen various other great finals, but due to the hype and the constant lead changes, the 2008 Final has gone down as the greatest match played in the men’s tournament.

Widely regarded as one of the most dominant Women’s tennis players of all time, Martina Navratilova was heading into the 1990 Wimbledon Tournament as a 17-time Grand Slam Champion. After winning Wimbledon at the All England Club eight times from 1978 to 1987, Navratilova was looking to become the all-time winningest player in Women’s Singles history at Wimbledon. At 33 years of age and after struggling with injuries, the 1990 Wimbledon Women’s Singles Final looked like her last shot to break the record.

Despite her age and knee problems, Martina Navratilova dominated throughout the whole tournament as she did not lose a single set in her run to the championship game. Conversely, it took Garrison, who was 27 at the time, two strenuous fights against Monica Seles and Steffi Graf to reach her first final at Wimbledon.

Garrison’s win against Graf made Navratilova’s path to the Wimbledon crown even easier, and the final soon turned into a no-contest. Martina Navratilova started dominating the match right away, closing the first set 6-4. By the second set, Garrison had already lost grip of the match, as Navratilova closed out the set 6-1, grabbing her ninth Wimbledon title and final Grand Slam honor.

The Longest Wimbledon Match Ever (2010)

Over its extensive history, Wimbledon has been the theater of not only some of the fiercest battles between the best players in the world but also record-breaking matches. This was the case for the first-round matchup between John Isner and Nicolas Mahut on June 22nd, 2010.

John Isner, who was 26 at the time, reached the Wimbledon first round as the number 23 player in the ATP rankings, while Nicolas Mahut had to go through qualifiers to earn a spot on the board at the All England Club.

The match started off at a fast pace, but it was suspended after four sets due to darkness. The two met again the following day. However, the match had to be suspended again due to darkness as neither could break the tie. Finally, on June 24th, John Isner was able to win the match after 11 hours and five minutes and 183 games in what went down as the longest match in tennis history.

Pages Related to What Are The Best Wimbledon Tennis Matches Ever Played?