What Are The Best US Open Tennis Matches Ever Played? 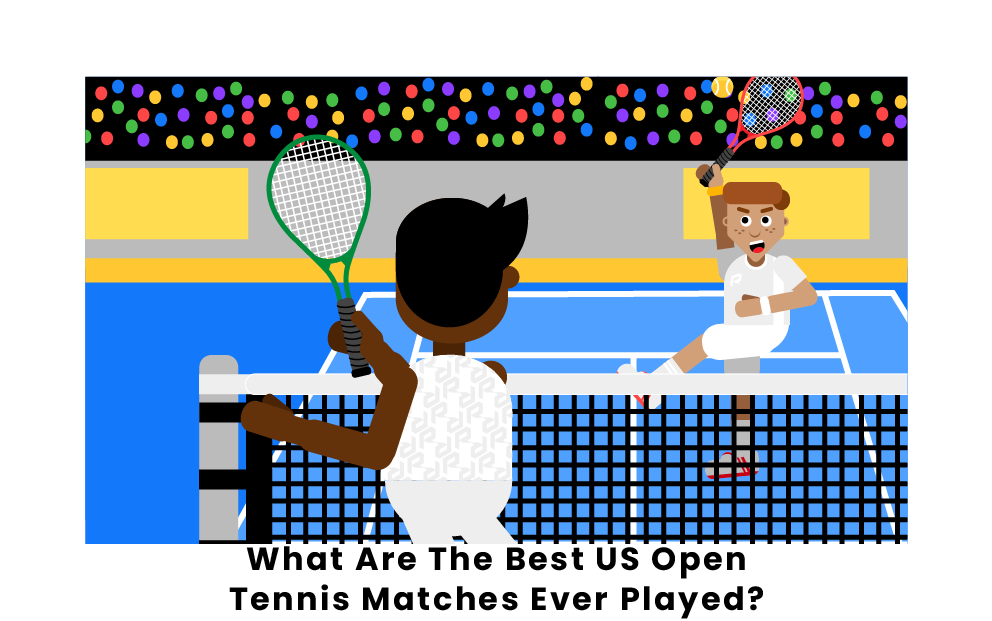 The US Open is one of the oldest and most prestigious tennis tournaments in the world. Regarded as a premier competition when it was first held as the US Championships in 1881, the US Open has only increased in stature since then. Now enshrined as one of the four Grand Slams–and the final one on the yearly tennis calendar–the US Open holds a special place in the heart of every tennis player and fan, especially those who hail from the US.

Have you wondered, what are the best US Open tennis matches ever played? Keep reading for more details on the greatest Grand Slam matchups that ever took place on US soil.

In arguably the best US Open match of all time, Pete Sampras defeated Andre Agassi in front of a raucous evening crowd. Both players were already-established titans of tennis going into this quarterfinal matchup, with over 20 Grand Slam titles between them.

Each of the four grueling sets went to a tiebreaker, not a single service was broken, and every point was hard-fought in this thrilling match that ended after midnight. Agassi won the first set, fending off three set points in the tiebreaker.

Sampras proceeded to take the next three sets against the furious opposition of Agassi. The momentum seemed like it might shift when Sampras double-faulted in the fourth set. However, Agassi missed an easy volley on the third match point, handing Sampras the victory.

For the first two sets, Federer looked dominant, winning the first in a tiebreaker and the second 6-4. Then the pendulum swung, and Djokovic took the next two sets.

Federer surged back in the fifth set and served for the match point at 5-3. Djokovic made an amazing crosscourt forehand return, a shot that has become known as one of the greatest saves in tennis history. He then saved a second match point before taking four straight games to win the match.

The 1995 Final between Monica Seles and Steffi Graf was a matchup between two of the most beloved and successful women’s tennis stars in history. Seles had only recently returned to competition after a tragic attack by a fan forced her to take a two-year break.

Both players made strong showings early, with Graf winning the first set in a tiebreaker, followed by Seles taking the second without losing a game. Graf rallied in an inspiring display of resilience to win the third set 6-3 and take home the title. The quality of play on display in this match–and the attention it garnered–contributed to the increasing popularity and heightened profile of women’s tennis in the modern era.

In an epic battle that finished after two in the morning, Rafael Nadal defeated Dominic Thiem in the 2018 quarterfinal. This match pitted two of the best and most physically dominant tennis players at the time against each other.

Nadal looked lost early on, failing to win a single game in the first set. However, he soon recovered, and the pair engaged in a hard-hitting duel. Nadal took the next two sets, but Thiem did not make it easy, fighting for every point.

Thiem won the fourth set in a tiebreaker. The final set went to a tiebreaker as well. Nadal defended a match point, then struck back to win, with the final match time reaching nearly five hours.

John McEnroe’s journey to the 1980 US Open title was easily one of the most exciting in tournament history. His semifinal defeat of Jimmy Connors was thrilling and bitter, as he avenged a defeat in the same round the previous year.

However, McEnroe’s victory over Bjorn Borg in the final was even more electrifying. Borg had recently defeated McEnroe in the Wimbledon final the same year, and McEnroe was hungry for revenge. The pair represented the hottest rivalry in tennis in the late 1970s.

McEnroe jumped ahead early. Winning the first two sets, he looked to have the match in hand; but Borg mercilessly took the next two sets.

McEnroe broke Borg’s service in the seventh game of the fifth set, thanks to a double fault. Seizing the momentum, McEnroe served out the next game for the win. Although this match was not as epic as their famed Wimbledon matchup, the intensity and skill on display were arguably higher.

Pages Related to What Are The Best US Open Tennis Matches Ever Played?