What Are The Kinds Of Tennis Injuries? 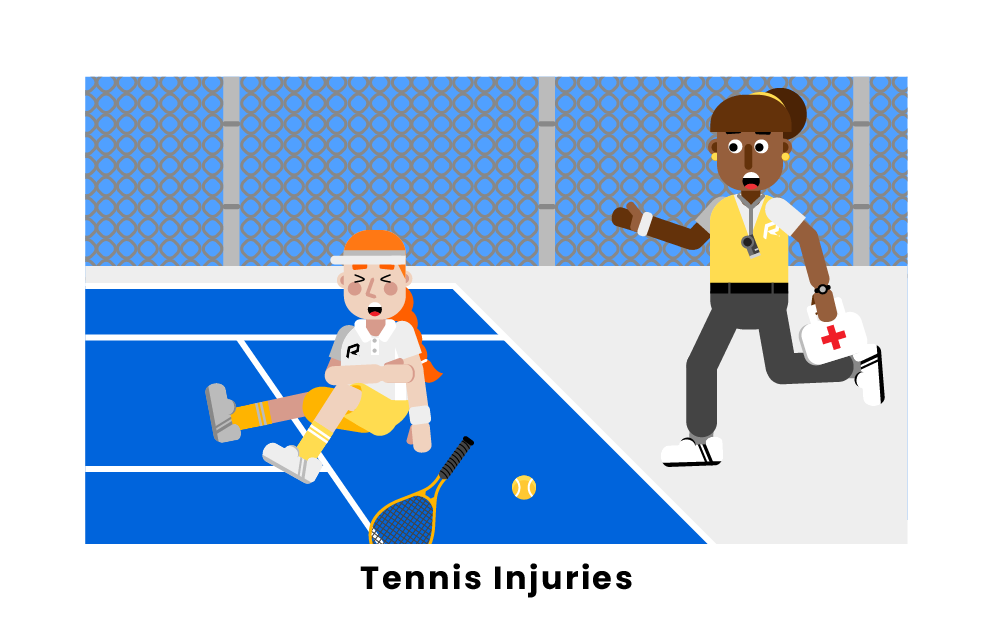 Due to the extremely mobile and athletically-demanding nature of tennis, injuries are very common within the sport. Injuries occur in both the upper limbs and the lower limbs and can range from minor to serious conditions.

Much like golf and baseball, there are a large number of upper-body injuries that commonly occur in tennis. The repetitive movements that tennis requires put large amounts of stress on the shoulder, wrist, elbow, and forearm.

In tennis, the movement pattern that exhibits the most stress is the action of swinging the racket. Throughout the course of a tennis match, a player will complete this action hundreds of times, which can result in a number of elbow and wrist injuries.

Tennis elbow, also known as lateral epicondylitis, is a painful condition caused by overuse and the play of tennis. The injury is caused by inflammation of the tendons that join the forearm muscles on the outside of the elbow. Tennis elbow is usually developed when players use their forearm swing often in a match of tennis and frequently when they play tennis, because they are using the same arm motion and therefore using the same muscles and tendons repeatedly.

The repetitive nature of swinging a racket is typically the cause, though the injury can occur outside of tennis, as well. People who work as painters, plumbers, carpenters, and butchers get tennis elbow, as they use similar motions in their arms to tennis players

To fix tennis elbow, resting your arm is the most important thing to do, so you do not further injure yourself. Over the counter pain relievers also relieve tennis elbow pain and inflammation over time. However, if these little treatments don't work, doctors may subscribe to surgery, as the pain tends to spread from the elbow to the wrist and forearm.

Another common upper limb injury in tennis is Carpal Tunnel Syndrome, a wrist injury caused by inflammation of the nerves and small tendons surrounding the wrist joint. CTS makes the wrist and hand feel numb, and can also lead to pain in the arm. The inflammation may take months to be reduced, even with active treatment. Wrist wraps are the best ways to prevent injuries of this kind, as well as adequate resting of the arm.

Similar to that of football and basketball, tennis players also incur a number of lower body injuries due to the constant lateral movement that the sport requires. As a result, ankle and knee injuries are fairly common.

Sprained or twisted ankles are extremely popular injuries in tennis players because they can happen any time a player changes direction or loses their footing in an awkward manner. Sprained ankles are typically minor injuries that allow players to recover in days or a few weeks, and some players may choose to play through the injury.

Knee injuries are also common in tennis, as they result from the same intense lateral movement patterns. Knee injuries can be far more serious than a sprained or twisted ankles, with some injuries requiring an entire year for proper recovery.

Knee wraps, supportive tennis shoes, and proper footwork are the best ways to prevent these injuries.

Pages Related to What Are The Kinds Of Tennis Injuries?

What Are The Best Tennis Books?What Is Singles In Tennis?What is The Arthur Ashe Tennis Stadium?
Is Tennis In The Summer Olympics?Venus Williams Bio And FactsWhat Do You Call A Tennis Score?
PreviousNext