What Are The Best Seats At A Tennis Match? 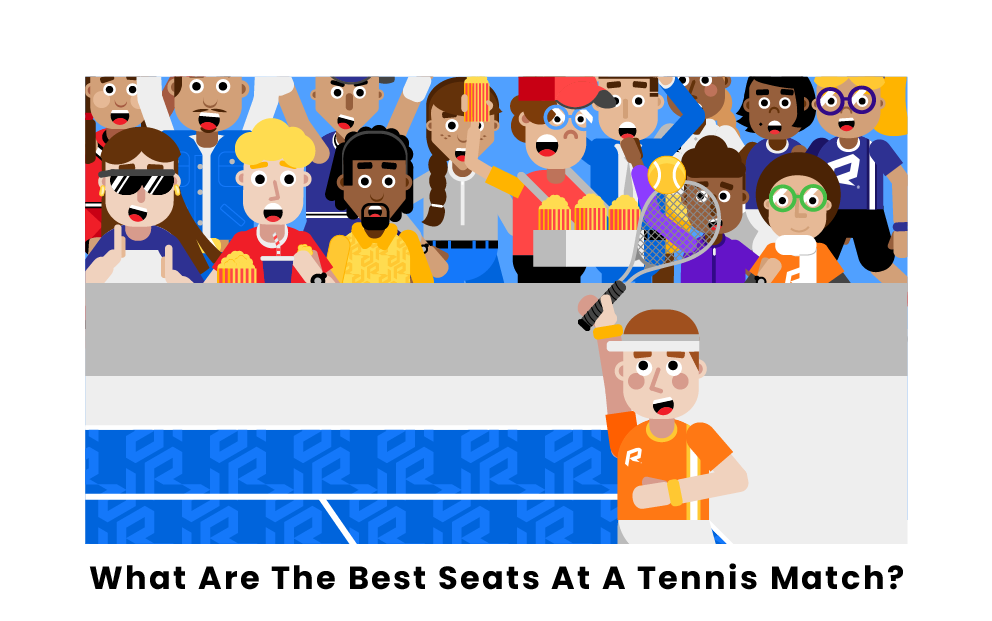 When attending a tennis match, the first thing you need to do is purchase a ticket, but which one will get you the best view of the match? You have to consider the vantage point, weather, and price.

When watching a tennis match, the closer you are, the easier it is to follow. In tennis, the seats that allow viewers the best vantage point to watch the game are at the baseline or corner seats.

The baseline allows you to be able to see where the ball lands without straining your neck to track the ball back and forth, like you would if you sat in sideline seats. In a baseline seat, you are sitting behind the player. This puts you on almost the same level as them, which can make it easier to watch their technique and where the ball lands at the end of each rally. In tennis, this is especially important since a ball landing a centimeter to the right of the line could determine if the player won the set or not.

The corner seat is the second-best seat to sit in to watch a tennis match. Some tournaments have courts that either have limited baseline seating or none at all. Just like with baseline seats, the corner seat will allow you the vantage point to watch the gameplay out without whipping your head back and forth. A benefit of sitting in a corner seat is that it allows you to have an angled view of the game, where you have both players in view and can see both of their techniques.

When most people select seats, they are focusing on the best vantage point to watch the game from. What most fans don’t consider is the fact that most stadiums are outdoors, and there is little to no shade. This means that for certain parts of the day, viewers will have sun either blinding them or beating down on their backs. Yes, technology has developed to the point where some stadiums at big tournaments can close the top of the stadium, but normally those only shut if there is rain forecasted. When it is a hot and sunny day, there is not much coverage.

So which seats would be the best to avoid the sun? Depending on which stadium you go to, there most likely will be a shade map you can reference. For the most part, since the sun rises in the east and lands in the west, the east side of the court will have the most sun coverage throughout the day. A good way to know which side is the east on a court is to look where the umpire chair is located. This is because the umpire chair is placed on the west side of the court so that the sun is not interfering with the umpire's calls.

Once you have found the seat that avoids the sun and provides the best view of the players, it then comes down to price. When going to more popular tournaments such as the U.S. Open, the seats are more expensive. First, you need to decide if you want to go during the day or at night. At the U.S. Open, the day session is from 11 AM to whenever the day matches end, and the night sessions start at 7 PM to whenever the night matches end.

The closer you get to the end of the tournament, the more expensive it will be. This is because there will be more well-known players and fewer matches. For the U.S. Open’s first week, starting ticket prices range from $115 to $275 depending on the ticket you choose. Once you get to the semi-finals, the tickets start at $495 and go up to a starting price of $1,495 for the final. However, these prices can fluctuate from year to year.

The typical seats most people go for are courtside seats, corner seats, midcourt seats, and baseline seats. The most affordable of the seats are corner seats. The most expensive seats are courtside seats. This is where you will see the camera pan and show celebrities that are attending the game. In terms of value, the baseline seats will get you close to the players and will give you the best vantage point to watch the game, even though they are more expensive than the corner seats.

When should I buy tickets for a tennis match?

What days should I plan to go to a tennis tournament?

The best days to attend a tennis tournament depend on your preferences. If you want to see the big names in tennis, plan to buy tickets during the quarter-finals, semi-finals, or final match. The competition will be much more intense during these rounds, generally leading to a better experience. However, tickets will also be much more expensive in the final rounds of tournaments. For cheaper tickets, it is best to purchase tickets for the early rounds of a tournament.

What should I wear to a tennis match?

Unlike other sports, tennis matches generally require spectators to dress more formally than others. While this may not be the case at local, community tennis matches, where fans can generally dress more casually, at prominent tennis tournaments such as the U.S. Open, Wimbledon, and the Australian Open, spectators are expected to wear more formal clothes. These include suits or button-down shirts and slacks for men, and dresses or similarly-formal outfits for women. Naturally, it is also important for spectators to bring appropriate sun protection, such as sunglasses, sunscreen, and water.

Pages Related to What Are The Best Seats At A Tennis Match?