What Does 21.5 Mean In Tennis Betting?

Gambling on tennis involves several types of wagers that are unique to the sport. However, tennis betting shares concepts and terminology with many other sports. Keep reading for a complete explanation of the term 21.5 in tennis betting. 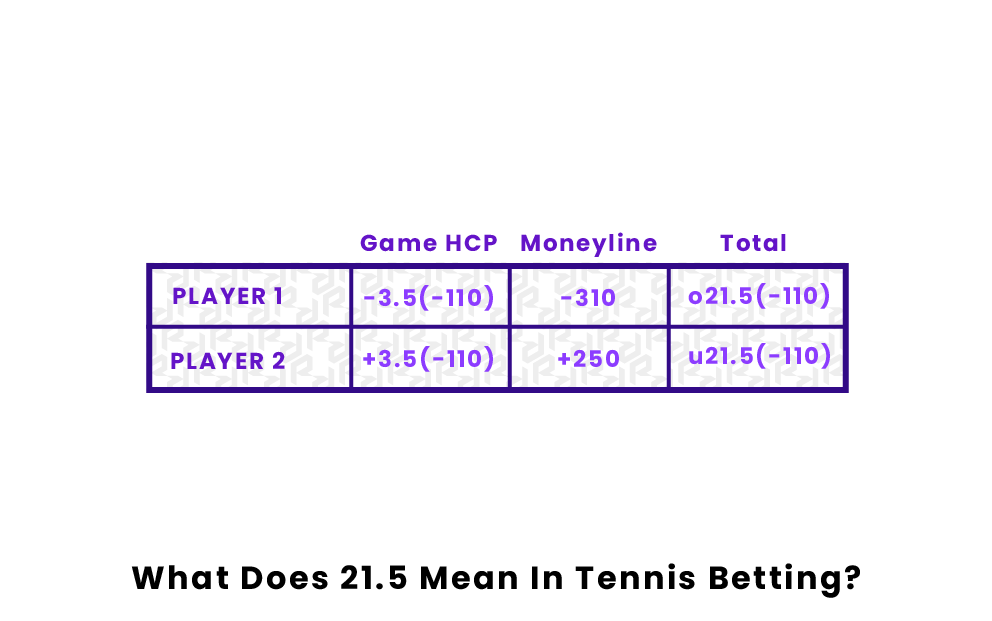 21.5 is a type of bet that you could make for a tennis match. The number has to do with the over/under of the number of games that are played in a particular tennis match. In tennis, this bet is commonly referred to as a total games bet.

During any given tennis match, there will be an over/under number set on the number of games that will be played during a tennis match. Typically, if the feeling is that the match will remain close throughout, then the over/under number will increase as the number of games increases in a close match. However, if the match is projected to be a blowout, then the over/under amount will be lower as the game would end quickly.

An example of a match game total going over 21.5 would be a score of 6-4, 3-6, 6-1. In this case, there are 26 total games played, so the over 21.5 games would be hit. Since the game total after the first two sets is 19 and a third set is being played, the over would automatically win before the third set even begins. This is because the minimum number of games played in a set is six, and six games would be enough to hit the over.

If the score was 6-2, 6-1, only 15 games would be played, making the under the winning bet. In a lot of cases, under and over bets are contingent on whether or not the match goes to a third set. In some cases, however, if the scores in each set are very lopsided, the under can still win in a third set.

What does a total games bet mean in tennis?

In tennis, a total games bet is a bet where people can decide whether a tennis match will go over or under a certain number of games played. Matches that are expected to be competitive will usually have a higher game total, whereas an expected blowout will have a lower total. In many cases, the total games bet will be decided based on whether a tiebreaker set is played. An example of a game's total bet may be 20.5, meaning a person can bet on whether they think the match will have over or under 20.5 total games.

What does +4.5 mean in tennis betting?

In tennis betting, +4.5 would mean that a player must lose by four games or less for the bet to hit. Similar to other sports, a bet with a “+” or “-” symbol indicates spread betting. In tennis, spread betting is mostly used for games, and a total of +4.5 would be given to a heavy underdog. If the score was 6-4, 6-4, the underdog would still only lose by four sets, meaning that the bet would hit. The player who is “+” games would not receive any better payout for winning the match outright. In many cases, sportsbooks will offer alternate game spread lines with varying odds.

Pages Related to What Does 21.5 Mean In Tennis Betting?