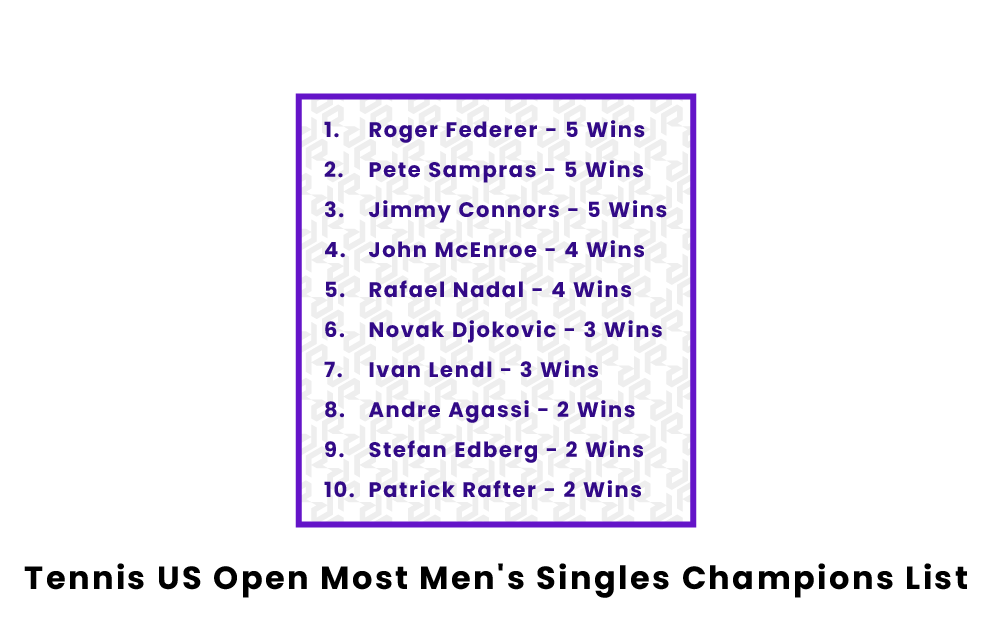 Who has won the most US Open Tennis titles in the men’s Open Era?

In 2008, Roger Federer won his fifth US Open, a record number of US Open wins in the Open era. Federer won four of his championships consecutively from 2004 to 2008, and became the first man to win five consecutive titles at two different slam events. Federer’s first US Open win was a dominant one, as he defeated previous US Open winner, Lleyton Hewitt, with a score of 6-0, 7-6 (3), 6-0 in three sets. In that same year, Federer won two other Grand Slams. Federer’s last US Open win occurred in 2008, when he defeated fourth-ranked Andy Murray with a score of 6-2, 7-5, 6-2.

At the time of his retirement, Pete Sampras had won a record 14 major singles titles. Additionally, he shares the record for most US Open title victories with five, winning in 1990, 1993, 1995, 1996, and 2002. Sampras received a lot of doubt in his final US Open tournament, even from his opponents. One of them stated, “I’d be surprised if he wins his next match.” He was getting older, started falling in rank, and hadn’t won a title since July 2000. Even Sampras described those circumstances as “the lowest moment of my career.” In 1990, Sampras defeated Andre Agassi to win his first US Open title, and in 2002, he played the final game of his career, defeating Agassi once again to win his final US Open title.

Jimmy Connors’ first US Open title win was an unforgettable event. In 1974, he won 95.88% of the matches he played in, and his 6-1, 6-0, 6-1 win against Ken Rosewall is widely regarded as the most one-sided win in Grand Slam history. To add on to that feat, Connors won 15 titles and three Major crowns in the same year. He went on to win the US Open in 1976, 1978, 1982, and 1983, being the first men’s tennis player to reach two, three, four, and five US Open titles. Connors also became the first man to earn more than $5 million in tennis earnings following his 1983 US Open victory.

After his victory in 1981, John McEnroe was the first male tennis player to win three consecutive US Open Championships in the Open Era. McEnroe won his first US Open title in 1979, his win making him the youngest US Open winner in the Open era, which he held for 11 years. McEnroe went on to face Björn Borg twice in the US Open finals. In 1981, Borg was defeated, and would walk out to never appear in a grand slam event again. His fourth and final victory in 1984 was inevitable. He went 82-3 that season, which is the best ever single season recorded by a man, with many people considering this period one of the best seasons of all time.

Rafael Nadal won his first US Open title in 2010. He then won three others in 2013, 2017, and most recently, in 2019. Nadal’s first title win came against Novak Djokovic. This win meant that he would become the youngest tennis player in the Open Era to get a Career Grand Slam, which means that the player won all four of the major tennis championships consecutively. His latest US Open title came in 2019, where he faced Daniil Medvedev and won 7-5, 6-3, 5-7, 4-6, 6-4. This hard-fought win meant Nadal was one step closer to Federer in terms of Grand Slam titles, a record he would eventually surpass.

In 2011, Novak Djokovic had one of the best years in men’s tennis. He had a 92.6% win percentage, won ten titles, and went 10-1 against two of the best, Federer and Nadal. Federer eventually defeated him, but Nadal would be winless against him that year, losing at Wimbledon and the US Open. Djokovic’s most recent US Open victory came in 2018, when he beat Juan Martin del Potro 6-3, 7-6 (7-4), 6-3. The crowd would roar in support of Del Potro, but Djokovic silenced them. After this win, he would equal Sampras’ number of major trophies (14), with his other US Open win coming in 2015.

Ivan Lendl was a legendary player, continuously reaching the US Open final from 1982 to 1989. He won three of them in 1985, 1986, and 1987. In his first two finals, he lost to Jimmy Connors, and then to John McEnroe in 1984. His luck changed in 1985 when he won in straight sets to win against McEnroe, getting payback for the year prior. He followed that up with a win against Miloslav Mecir and his last US Open trophy came in 1987 against Mats Wilander. Wilander then got his own payback in 1988 and Lendl lost his last US Open final against Boris Becker in 1989. He participated in five more US Opens but never reached another final. Nevertheless, Lendl’s legacy was cemented. He ended his US Open career with 73 total wins and only 13 losses, for an extraordinary 85% win percentage.

17-year-old Andre Agassi made history when he won the US Open after entering the tournament unseeded, something that had not happened since 1987. In that 1994 final, Agassi defeated Michael Stich 6-1, 7-6, 7-5, becoming the first unseeded champion in the Open Era. His second win would occur in 1999, when he beat Todd Martin, only dropping two sets en route to the final. The game would be a five-set thriller, with Agassi winning the first set, Martin taking the second and third set, and Agassi winning the two final sets. After the game, Agassi would move to the highest rank in tennis.

Stefan Edberg won the US Open twice, once in 1991 and again the following year. In 1991, he dominated fourth-ranked Jim Courier, winning 6-2, 6-4, 6-0. When his first serve was between 90 and 99 miles per hour, Edberg had a deadly serve, winning 91% of his points. The US Open finals in 1992 would be the polar opposite of the one in 1991. Edberg was contested until the end, making his match against Michael Chang the longest ever US Open match. Edberg lost the opening and the fourth set but won the second, third, and last set after playing five hours and 26 minutes.

Patrick Rafter took home the US Open championship title in 1997 and 1998. Rafter would face Greg Rusedski in the final of the 1997 US Open, losing the third set, but winning the rest 6-3, 6-2, 7-5 to become the first Australian man since John Newcombe to win the US Open. He was insulted by many who thought that he got lucky. He proved them all wrong by successfully defending his title in the 1998 US Open. Rafter would face Mark Philippoussis, beating him 6-3, 6-2, 6-0, though he lost the second set 3-6. He would also win the American Summer Slam the same year, being the first man to do so in the Open Era, winning the Canada Masters, Cincinnati Masters, and US Open.

Rod Laver won his first and only Open Era US Open trophy in 1969. On his route to the finals, he beat Dennis Ralston in five sets, Roy Emerson in four sets in the quarterfinals, and defending champion Arthur Ashe in three sets in the semifinals. He would then face Tony Roche in the finals. Laver had faced the highly favored Roche eight times that year and was defeated five times. He would win 7-9, 6-1, 6-2, 6-2 in a hard-won match that lasted nearly two hours.

John Newcombe won his single US Open trophy in 1973. In his match against Jan Kodes of Czechoslovakia, Newcombe triumphed 6-4, 1-6, 4-6, 6-2, 6-2. He won the match with an ace, which many considered retribution, since he lost to Kodes in the opening round when they first met two years prior. Newcombe was also prolific in doubles, winning the US Open with two different players in 1971 and 1973. Newcombe also won a couple of Grand Slam titles in mixed matches, demonstrating his excellence both when playing alone or with a partner. He had another highlight when he played in the 1981 US Open with Fred Stolle, but lost against John McEnroe and Peter Fleming in the fifth set.

In a game that’s typically filled with giants, 5-foot-7 Ken Rosewall was at a disadvantage. However, he did not let that get the best of him. Rosewall would go on to win the 1970 US Open against former champ Tony Roche on grass, dropping the opening set 2-6, but taking the remaining three 6-4, 7-6, and 6-3. He excelled on all courts and surfaces, and because of his agility on his feet, he was hailed as a complete player. He also did well in doubles, winning nine major championships, including the 1969 US Open crown.