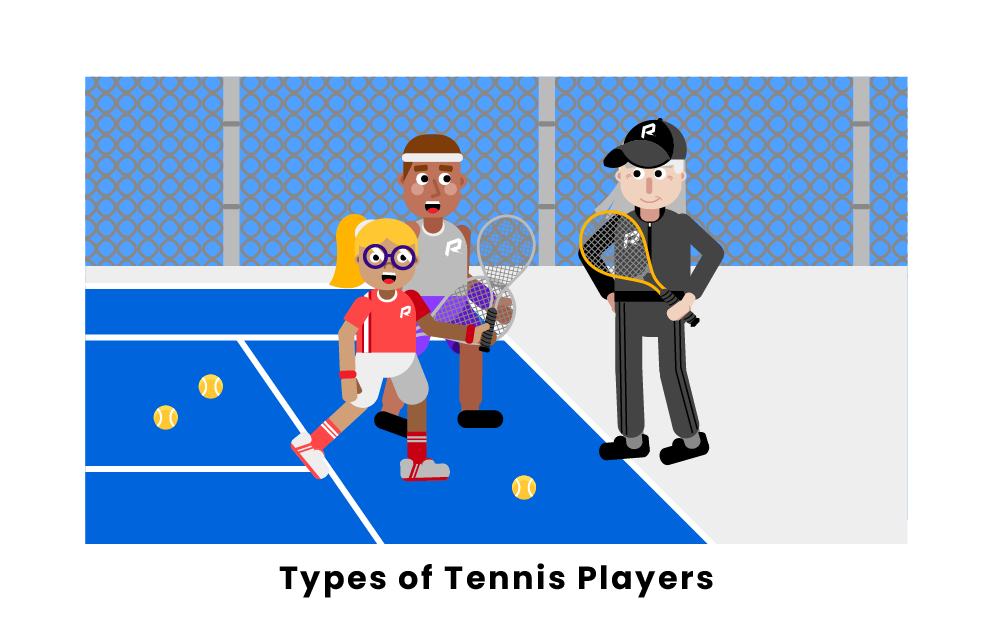 What are the different types of players in tennis? What is each player type called and which strategies do these players use to their advantage? Get ready to learn all about tennis player types. No prior knowledge is necessary.

There are several different types of players in tennis. Each type is characterized by its own unique style of play. Most tennis players fit under one of the main player types, based on their preferred tendencies and tactics usedthroughout the course of a match.

The list of player types in tennis is expansive and hardly limited to just a handful of play styles. However, the most common types are as follows: aggressive baseliner, serve-and-volleyer, counterpuncher, all-court, junk baller and pusher. It is important to note that the difference between each player type is not necessarily seen in the player’s swing or hit speed, but rather in their on-court alignment and placement of the ball as the match progresses. For example, some players like to stand near the net and hit overpowering shots to outscore the opposition, while others prefer to position themselves far away from the net and instead focus on hitting high-arching shots with lots of spin.

What Is a Baseliner Tennis Player?

A baseliner tennis player rarely charges towards the net, instead opting to stand relatively close to the baseline (the boundary line positioned at the very back of each half of the court). Baseline players are focused on controlling the game by hitting strategic shots that force the opponent to move around a lot. This makes it more difficult to successfully return shots in the long run, as the opponent often must scramble from one side of the court to the other in order to return consecutive shots.

Moreover, baseliners further attempt to stifle their opponents by hitting angled shots, in which the ball does not merely travel on a straight trajectory. For example, a baseline player that makes contact with the ball while standing on the right side of the court is likely to hit the ball diagonally towards the left side of the opponent’s half. This strategy again makes it very difficult for an opposing player to reach the ball in time over the course of a several-hit rally. 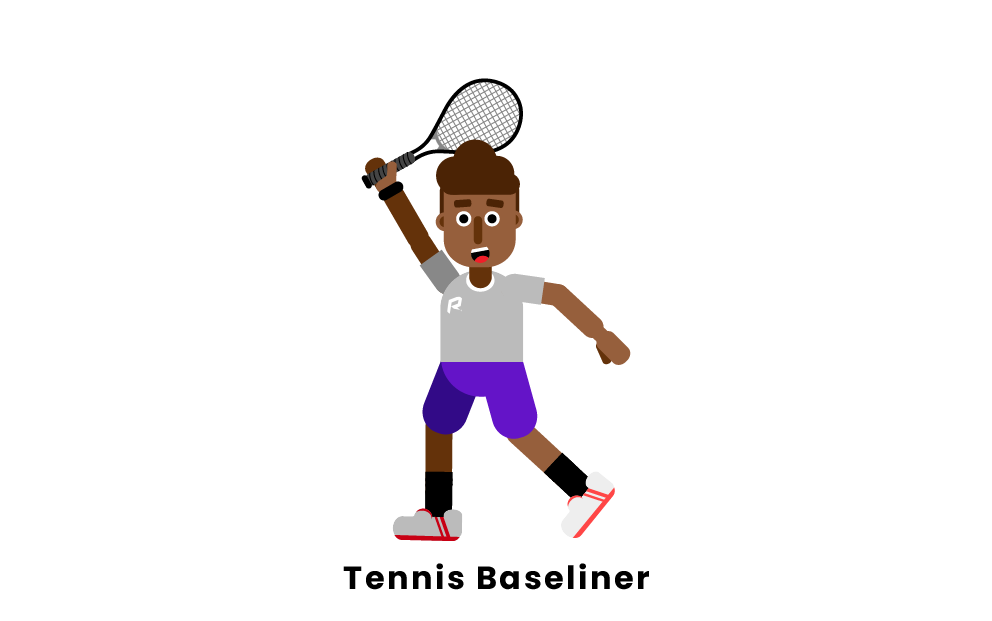 What Is an Aggressive Tennis Player?

An aggressive tennis player is simply a player with an offensive-minded approach. Whereas some players employ a defensive approach that involves hitting simple returns and waiting for the opponent to make a mistake (i.e. hitting the ball into the net), aggressive tennis players are all about generating scoring opportunities. They are a threat to score at any given time, favoring powerful line-drive shots requiring exceptional speed and hand-eye coordination in order to be returned.

An aggressive play style is advantageous in that it makes the opponent vulnerable to hitting high-arching pop up shots (in a desperate attempt to save the ball from bouncing twice and losing the point) that are easy to spike down onto the court with force. Being too aggressive can backfire, however, as skilled opponents that are capable of consistently returning the ball can often catch the aggressive player out of position and place the ball well out of reach. 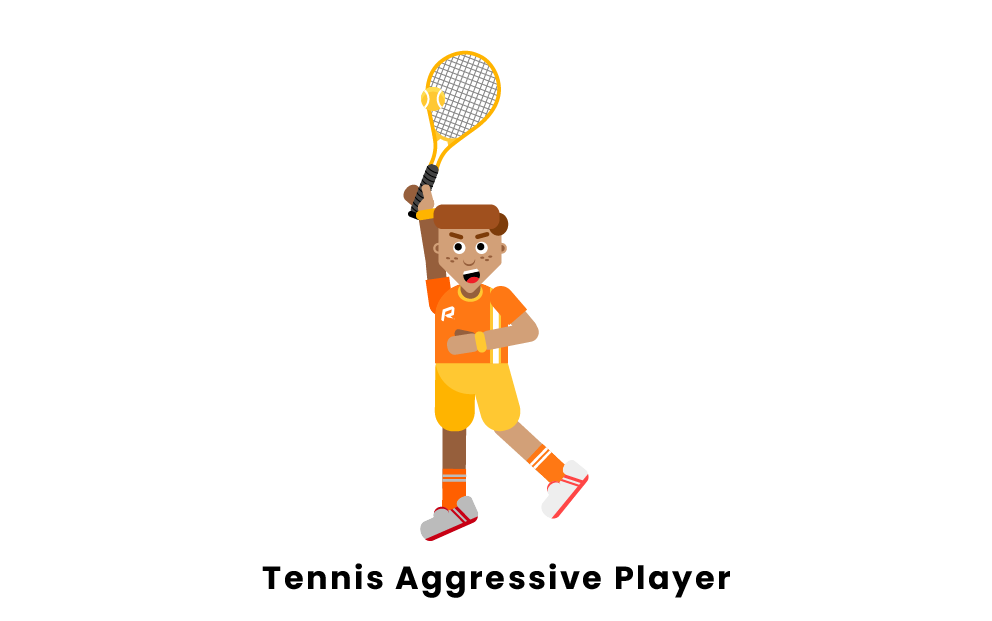 What Is a Junk Baller?

The junk baller is arguably the most unorthodox player type. Unlike baseliners or aggressive players, junk ballers do not try to overpower the opponent with blazing shots. Rather, they alternate between several different shot types, such as moon balls (hit extremely high into the air) and rapidly slicing balls that travel from one direction to the other mid-flight.

Junk ballers are rarely the fastest or most athletic tennis players, but they are great strategists that specialize in frustrating the opponent and making each successive shot virtually impossible to predict. Unconventional footwork, ball spin and mechanics all play a part in taking opponents out of their comfort zones and neutralize what they are trying to accomplish. 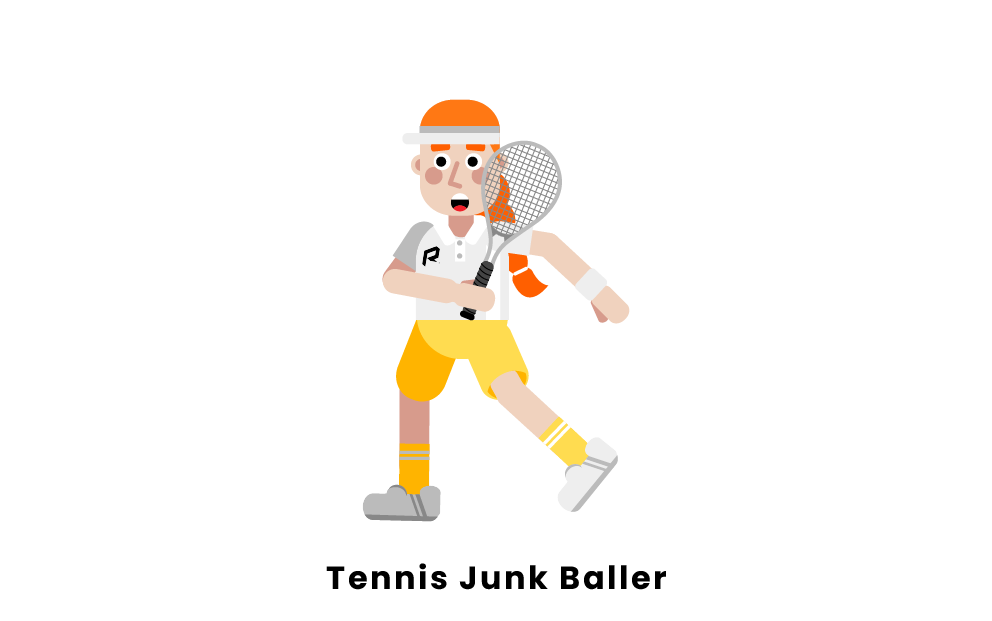 What Does It Mean to Be a Pusher in Tennis?

Pushers are the exact opposite of aggressive tennis players. They are defensive-minded players who generally do not strike the ball as well as the opponent, yet they score points by continually returning the ball until the opposing player makes an unenforced error (i.e. landing a shot outside of the boundary lines). Since pushers need to be adept at returning virtually every type of shot, they are often smaller in terms of physical stature and in excellent cardiovascular shape. These attributes allow pushers to cover lots of ground and chase down shots until the opponent becomes fatigued and forfeits a point by failing to put the ball in play.

Much like junk ballers, pushers are incredibly frustrating to play against at times, as a high motor and reluctance to concede easy points often leaves the opposition tired out and desperately searching for ways to score.

How Do You Play Aggressive Baseliner?

The best way to beat an aggressive baseliner is to force the player towards the net, an area of the court that baseliners prefer to avoid at all costs. This can be done by hitting a series of drop shots, which are lightly hit shots in which the ball just barely travels over the net before bouncing on the opponent’s side of the court.

Since baseline players rarely find themselves near the net, they will often hit poor return shots when forced to make a beeline towards the center of the court to counteract a drop shot. From there, a simple shot in which the ball is skied over the head of the returning player and landed in-bounds towards the very back of the court will almost always result in winning a point.

What Is Counter Punching in Tennis?

Counter punching is another defensive-centered strategy, in which players try to force their opponent’s into making silly mistakes. Players that employ the counter punching strategy are true students of the game, studying their opponent’s tendencies and movements leading up to the match. Knowing how the opponent is likely to react when faced with a certain type of shot is key to every counter punchers’ success, in that it allows them to hit deep, high-arching return shots that often force the opponent into making a mistake because they are virtually impossible to hit with force and precision accuracy.

Counter punchers seldom hit shots that are referred to as winners.  A winner is a shot that the opponent is unable to return, resulting in a point being awarded to that player/team. Since the counter puncher strategy relies heavily on defense as opposed to hitting tricky shots, points are mostly scored from errors committed by the opposition. 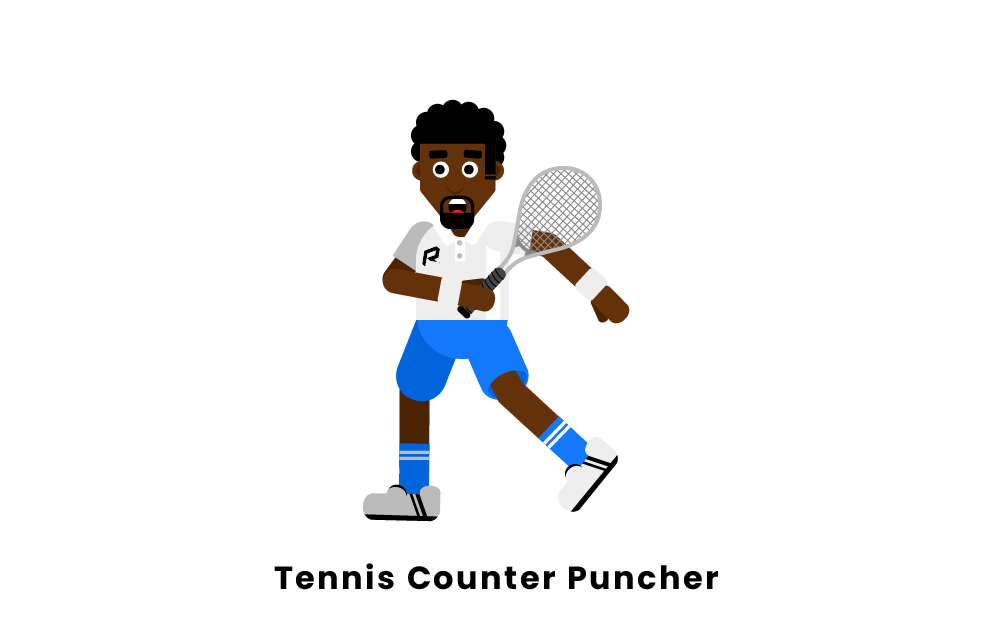 How Do You Beat a Tennis Net Player?

In order to beat a tennis player that likes to crowd the net and return shots almost immediately after they cross the net, one must hit looping shots the travel over the head of the net player and force them to retreat. Forcing a net player to vacate the space not only minimizes that player’s main strength, it also causes a lot of energy to be expended and sets the other player up for a short, hard-hit shot that bounces in play before the net player even has a chance to recover and return to the desired position on the court.