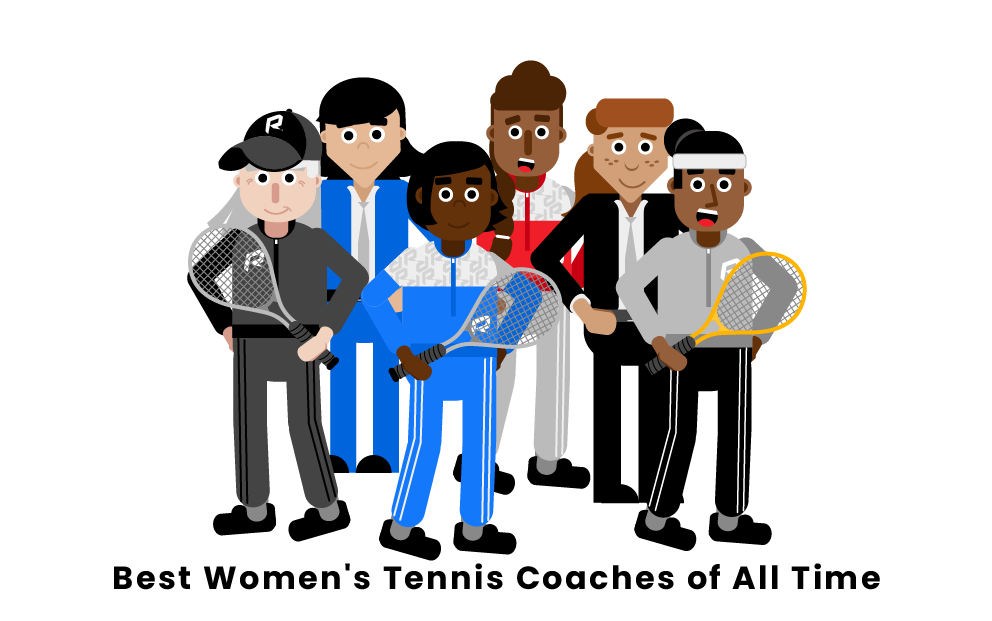 Unlike in other sports, tennis coaches do not necessarily help their players much, if at all, during a match. In fact, coaching during a match is not allowed in tennis, so coaches earn their money before and after their players play. Nonetheless, these coaches are still key to a player’s success. Below, the top six women’s tennis coaches of all time are ranked and discussed.

Who are the best women's tennis coaches in the world?

Next to Richard Williams, Patrick Mouratoglou is likely the most important coach Serena Williams had, and he comes in at number three on this list. When Mouratoglou joined Williams’ team, she was at one of the low points in her career, as she had just lost in the first round of the 2012 French Open, the first time she had lost in the first round at a Grand Slam. With the help of Patrick, Serena was able to return to dominant form. During their 10-year partnership between 2012 and 2022, Serena won three US Opens (2012-2014), three Wimbledons (2012, 2015, 2016), two Australian Opens (2015 and 2017), and two French Opens (2013 and 2015). Early in 2022, Mouratoglou and Williams ended their partnership, but his impact on Williams cannot be understated. In addition to Serena, he coached Anastasia Pavlyuchenkova, Aravane Rezaï, Yanina Wickmayer, and Laura Robson, and he is currently working with Simona Halep and Coco Gauff.

One of women’s tennis legend Steffi Graf’s former coaches, Pavel Složil ranks number four on this list. Složil was a former great player himself, winning 32 doubles titles and making 29 finals in his career. As a coach, Složil helped the aforementioned Graf to 10 of her 22 Grand Slam titles when the two worked together between 1986 and 1991. The pair had their best year together in 1988, as Graf won the calendar Grand Slam by winning all four events that year, only the third time in history that feat had been accomplished. In all, she won three Australian Opens (1988-1990), three Wimbledons (1988, 1989, 1991), two US Opens (1988 and 1989), and two French Opens (1987 and 1988). In addition to working with Graf, Pavel also worked with the likes of Magdalena Maleeva, Jennifer Capriati, and Anna Kournikova between 1992 and 1999, although he did not have the same amount of success with them as he did with Steffi.

The second straight coach of Steffi Graf on this list, Heinz Günthardt checks in at number five. As a player, he won five singles titles before moving into the coaching ranks. After Graf and Pavel Složil ended their partnership following the 1991 season, Graf teamed up with Günthardt from 1992 until her career ended in 1999. While Graf was more of a polished player by the time Günthardt got to her, he still played a key role in helping her sustain her all-time great success. Under his leadership, she won the last 12 Grand Slams of her career. Specifically, she won four Wimbledons (1992, 1993, 1995, 1996), four French Opens (1993, 1995, 1996, 1999), three US Opens (1993, 1995, 1996), and the 1994 Australian Open. After Graf, Günthardt worked briefly with Jelena Dokic, Jennifer Capriati, and Ana Ivanovic. Under Heinz, Ivanovic–a former world number one-ranked player–returned to the top 20 in the world after falling as low as 65. While this is impressive, nothing Günthardt did as a coach comes close to the success he had with Steffi Graf.

Another former great player turned coach, Mike Estep rounds out this list at number six. As a player, Estep won seven doubles titles, along with two singles titles. While he coached a few players during his time, Estep’s best run as a coach was with all-time great Martina Navratilova between 1983 and 1986. Estep’s main contribution to Martina’s game was teaching her to play a more aggressive style, approaching the net more and coming in behind her second serve. His teachings paid off, as during their time together between 1983 and 1986, she won 10 of her 18 Grand Slams. Those 10 titles consisted of four Wimbledons from 1983-1986, three US Opens in 1983, 1984 and 1986, two Australian Opens in 1983 and 1985, and the 1984 French Open. Along with Martina, Estep was the coach of Arantxa Sánchez Vicario, Jana Novotná, Carling Bassett, and Hana Mandlíková, but he had by far his most success with Navratilova.

While the coaches listed below did not quite make the cut for the top six of all-time, they still deserve some recognition as honorable mentions. They are listed in alphabetical order by last name.

Who is the best women's tennis coach of all time?

As mentioned above, the greatest women’s tennis coach of all time has to be Richard Williams. Williams was the main reason why his two daughters, Serena and Venus, won an incredible 30 Grand Slams between 1999 and 2017.  Venus became one of the best players of her generation, and Serena turned into arguably the greatest player of all time. Without their father’s influence, no one knows whether they would have been as good, or had the same success.

Who is the best men's tennis coach of all time?

The best men’s tennis coach of all time, by several accounts, is Marián Vajda. Vajda was the coach of Novak Djokovic from 2006 until the two split early in 2022, and thanks to his teachings, Novak won 20 Grand Slams between 2006 and 2021. These are the most Grand Slams between a player and coach in men’s tennis history. While the two split prior to Djokovic's 21st Grand Slam victory at Wimbledon in 2022, Vajda’s impact on Novak's success cannot be discounted.