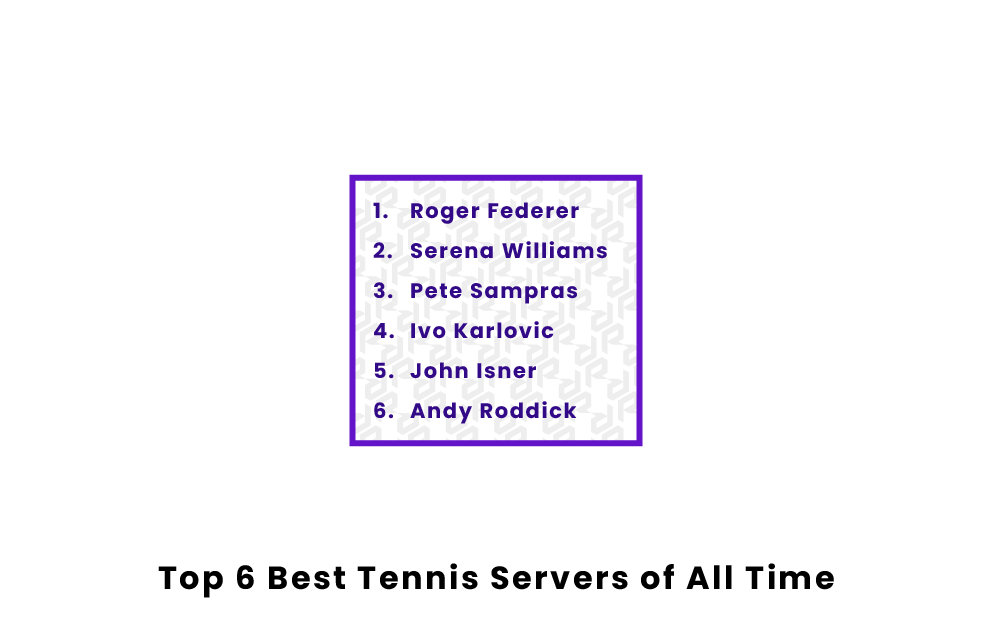 One of the most important techniques to master as a great tennis player is a strong serve. Some players are so skilled in this area that their serves are the dominant part of their power as a competitor. Listed below are the six best tennis servers of all time.

Which tennis players have the best serves of all time?

One of the greatest servers and tennis players of all time is Roger Federer. In the astonishing 1,462 ATP matches he has played, Federer has had 11,478 career aces, which equates to an average of 7.8 aces per match. He is even known for finishing off competitors by making multiple aces in a row, the most momentous of which being when he defeated Novak Djokovic in the 2014 Wimbledon Final with four consecutive aces. Though his serve is not considered one of the fastest or most powerful, it is remarkable for its placement, accuracy, and strategic disguise. Thanks to these facets, Federer boasts a notably high first serve percentage of 62%. On the other end, his serve is also successful because of how rarely he commits a fault. In fact, he currently holds an average of 1.9 double faults per match. With such a successful set of averages, it is no wonder that Roger Federer will one day retire with such an illustrious career behind him.

As arguably the greatest female tennis player of all time, Serena Williams is also one of the best servers to grace the international stage. The first thing her serve is known for is its speed. Often reaching over 120 mph, she is the third fastest female server in ATP history. As part of her excellent and aggressive gameplay, Williams is also particularly known for packing many aces into a single match, her personal best occurring in the 2012 Wimbledon semi-final when she won over Victoria Azarenka with a remarkable 24 total aces. While she has a very memorable career first serve average of 62.1%, it has also been noted that Williams’ serve game may be improving even further, with a first serve win percentage since 2018 of 72.9%. With 23 Grand Slam Singles titles (and 37 in total) under her belt, Serena Williams’s serve has served her very well and her career is far from over.

Though long-retired, Pete Sampras is still well-known as one of tennis’ greatest champions and possesses one of its strongest serves. Thanks to his unique combination of spin, power, and strategy, he delivered a serve that reached up to 153 mph in official gameplay and left him with a career average of 88.75% service games won. His serve was so fast and accurate that it has been often called the best serve in tennis history and has earned him the nickname “Pistol” Pete Sampras. He reached a career-high in 1993 of 1011 aces in a single year, served 994 aces the following year, and retired with an impressive career average of 11 aces per match. Thanks largely to his impressive serve, Pete Sampras retired with a total of 14 Grand Slam titles.

Though it did not win him any Grand Slam titles, probably the strongest and best overall serve in tennis history belongs to Ivo Karlović. Of the 694 official matches in which he played, he won 92% of his service games and set the record for the highest ever win rate on a first serve (82.7%). The most powerful part of Karlović’s serve was its speed. Until 2012, he had the fastest recorded serve in ATP history; his first serve exceeded 156 mph, and his second serve was over 144 mph. Thanks largely to this extraordinary attribute, Karlović ended up with a total of 13,728 career aces, which equates to an impressive 19.8 aces per match. After many years of playing, Ivo Karlović retired with 18 ATP Singles titles. He remains one of the best tennis servers of all time.

At the top of almost every great tennis servers list is John Isner, and for a good reason. In the 719 ATP matches in which he played, Isner completed a record 13,343 aces and had an extremely high first serve percentage of 69.1%. Supported by a strategy of quick points and volleying, his serve was notably the strongest aspect of his ability as a tennis player. In 2010, during the first round of Wimbledon, Isner even achieved the record for most aces in a single match, defeating Nicolas Mahut with a final total of 112 aces. A second record he holds is the fastest recorded serve in ATP history, which was a serve of 157.2 mph during the 2016 Davis Cup. Like Ivo Karlović, John Isner never won any Grand Slam titles but he remains an absolutely legendary and record-breaking tennis server.

One of the best and most unique servers in tennis history is Andy Roddick. The first renowned aspect of his serve was its unorthodox serve motion, a style so unique that it was ultimately used as part of the official logo used on his clothes. The second renowned aspect of Roddick’s serve was its speed. Before the record was continually pushed in the 2010s, he was known as the fastest server in tennis history, reaching a personal best of 155 mph at the 2004 Davis Cup. The third and most important aspect was his serve’s power and accuracy. Roddick ended his professional career in 2012 with an impressive average of 11.7 aces per match and a record of winning 90.11% of service games. With one U.S. Open win and 32 ATP singles title wins, Andy Roddick retired as one of the greatest tennis servers of all time.

Which tennis player has the strongest serve?

The tennis player with the strongest serve is John Isner. After a career of 719 official matches, he retired with a record 13,343 total aces, the most aces in a single match, the fastest recorded serve in ATP history, and an extremely high serve percentage of 69.1%. Though other aspects of his game contributed to a long history of only almost winning multiple Grand Slam titles, John Isner remains renowned for his powerful and accurate serve.

Which tennis player has the best first serve?

Which tennis player has the fastest serve?

The fastest serve ever officially recorded by an ATP tennis player was by John Isner. At the Davis Cup in 2016, Isner faced Bernard Tomic and scored an ace in the third set that was recorded at 157.2mph. This excellent gameplay by Isner helped secure USA’s 3-1 first-round win against Australia and unseated Chris Groth’s 2012 record for fastest recorded serve.

Pages Related to Top 6 Best Tennis Servers of All Time