Top 6 Best Tennis Serve And Volley Players of All Time 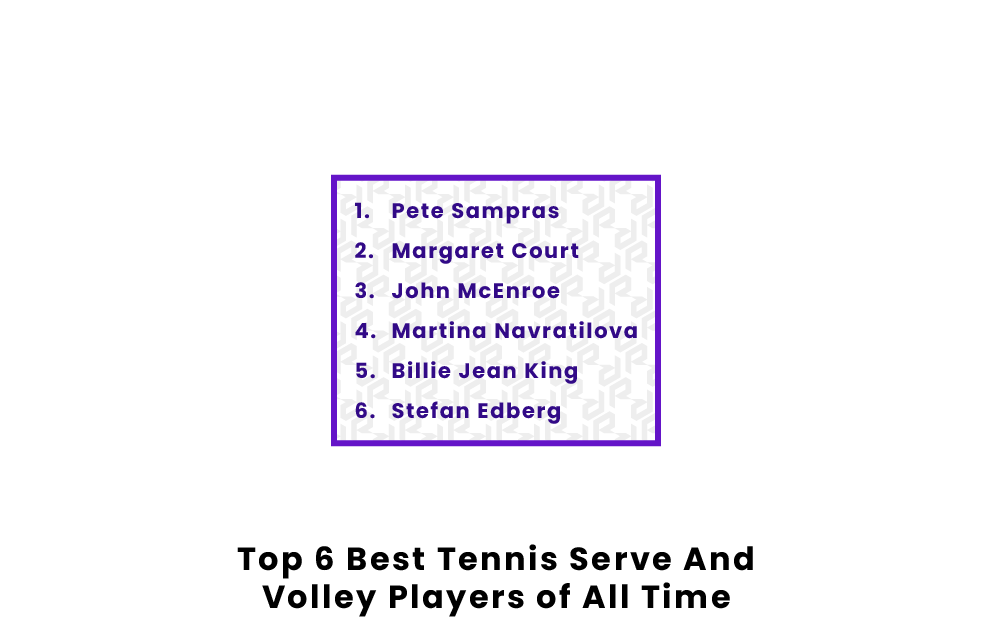 Which Tennis Players are the Best at Serving and Volleying?

It should be noted that this list was made by considering both the success of the player and how often they used the serve and volley technique, not just who was the best at serve and volleying.

One of the greatest tennis players ever, regardless of strategy, Pete Sampras is the number one player on this list. Sampras won 14 Grand Slam titles throughout his career, which was the most in history at the time of his retirement. He has since been passed by Novak Djokovic, Rafael Nadal, and Roger Federer, but his greatness is nonetheless still appreciated. Specifically, Sampras won seven Wimbledons (1993-1995, 1997-2000), five US Opens (1990, 1993, 1995, 1996, 2002), and two Australian Opens (1994 and 1997). Not surprisingly, Sampras had a lot of great tennis skills, but his powerful serve and excellent volleying techniques were major keys to his success. Sampras was not as much of a serve and volley player early in his career, but he quickly grew to love the technique, and especially used it at Wimbledon, winning seven titles in an eight-year stretch. Clearly, Sampras is one of the best players of all time, and the serve and volley skills he possessed were a major reason why.

Another great female serve and volley player, and another one of the overall greatest female players ever, Martina Navratilova comes in at number three on this list. Martina’s 18 Grand Slam titles rank her tied for fifth on the all-time list, behind fellow greats Margaret Court, Serena Williams, Steffi Graf, and Helen Wills. Half of her major victories were at Wimbledon (1978, 1979, 1982-1987, 1990), along with four US Opens (1983, 1984, 1986, 1987), three Australian Opens (1981, 1983, 1985), and two French Opens (1982 and 1984). She had her most impressive year in 1983, when her overall match record for the season was an astonishing 86 wins against only one loss. Perhaps even more unbelievable, in 2004, at the age of 47, she became the oldest player in the Open Era, male or female, to win a singles match. Martina’s combination of the serve and volley style and her soft hands allowed her to have all of this success, and she is certainly in the conversation for greatest female tennis player ever.

Known today for his work as a broadcaster for ESPN’s coverage of tennis, John McEnroe was once a tennis great himself, and he comes in at number four on this list. McEnroe is the winner of seven Grand Slam championships, three straight at the US Open from 1979-1981 and one more in 1984, along with three Wimbledons championships in 1981, 1983, and 1984.  McEnroe also made four other Grand Slam finals at the French Open in 1984, the US Open in 1985, and Wimbledon in 1980 and 1982. In 1984, McEnroe had his best year when he nearly matched Navratilova’s 1983 season, winning 82 matches and losing just three times.  While it did not lead to as much success as the three previous players, many people argue McEnroe had the greatest serve and volley in tennis history.  His lefty serve (which he hid so well thanks to the extreme contortion of his body) and his volley skills both made him one of the most difficult players for anybody to go up against during his time.

Well known for her activism off the court, Billie Jean King was also an all-time great on the court, and she ranks number five on this list. King took home 12 Grand Slam titles, six at Wimbledon (1966-1968, 1972, 1973, 1975), four at the US Open (1967, 1971, 1974, 1974), the 1968 Australian Open, and the 1972 French Open. She also had a great amount of success playing doubles, winning 11 mixed doubles Grand Slams and 11 women’s doubles Grand Slams. King was the aforementioned Margaret Court’s main rival, and together, the two helped to introduce the serve and volley technique into the women’s game. Prior to the two of them, no women used the serve and volley technique much at all. While she did not possess a very powerful serve, since she was only five feet, four inches, she was able to place her serves accurately and use her superior volleying skills to her advantage. These allowed King to become one of the greatest female players of all time.

Another outstanding serve and volley player, Stefan Edberg rounds out this list at number six. Stefan is the winner of six Grand Slams, winning the US Open back-to-back in 1991 and 1992, Wimbledon in 1988 and 1990, and the Australian Open in 1985 and 1987. He also managed to make the French Open final and the Wimbledon final in 1989, in addition to three more Australian Open finals (1990, 1992, 1993). What made Edberg’s serve and volley style unique compared to fellow competitors like John McEnroe was that, rather than a big serve or top-notch forehand, his serve befuddled opponents thanks to its excessive amount of spin. Since this slowed down the speed of the ball, Edberg was able to approach the net easier and be in a better position to finish off the volley. While his forehand likely held him back from winning even more majors, Edberg’s serve and volley game is up there with any player ever.

While the 20 players listed below did not quite make the top six, they still deserve some recognition as honorable mentions. They are listed in alphabetical order by last name.

Which men’s tennis player is the best ever at serving and volleying?

While it is a close call between John McEnroe and Stefan Edberg, McEnroe gets the edge as the best ever at serve and volleying,  thanks to his slight advantage in Grand Slam victories (seven to Edberg’s six). McEnroe had the more powerful serve, which consistently frustrated his opponents, although the excessive spin on Edberg’s serve was not easy to deal with. Either player has a great case for the best serve and volley player of all time, but John McEnroe is the winner, according to this list.

Which women’s tennis player is the best ever at serving and volleying?

The answer to this question is much more straightforward, as Margaret Court is clearly the best female serve and volley player ever, and arguably the greatest all-around player ever. As was mentioned above, Court’s 24 major victories are the most of any player ever, male or female, one ahead of Serena Williams’ 23. Court helped to bring the serve and volley tactic into the women’s game, and she truly is a pioneer in the sport.

What is serve and volleying in tennis?

Serve and volleying is a strategy players use in tennis, which involves players immediately rushing to the net after they serve and trying to win the point quickly by getting an easy volley winner. The strategy is often most successful with players who serve the fastest, as those serves are the hardest to get good returns on when they are well-placed. That being said, Stefan Edberg and Billie Jean King showed that one does not have to be a big server to be successful at serving and volleying.