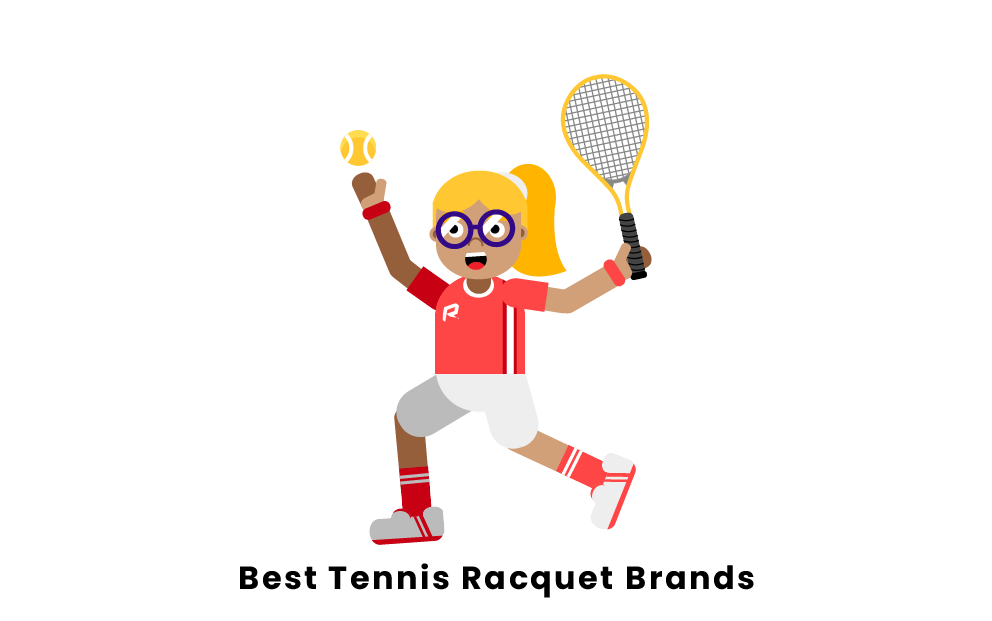 Undoubtedly, the most important piece of equipment needed to play tennis is the tennis racquet. Tennis players have a wide variety of brands to choose from when selecting a racquet, and most players are extremely partial to their brand of choice. Below are the top six best tennis racquet brands, each of which produces high-quality tennis racquets with unique materials, designs, and specifications.

What are the most popular tennis racquet brands?

Without a doubt, Wilson is one of the most famous brands in sports, with its equipment being used in various professional leagues across numerous different sports, from the NFL to the NBA. Wilson has also made its name as a supplier of tennis equipment and is famous for its tennis balls and its signature tennis racquets. Founded in 1913 as the Ashland Manufacturing Company, tennis racquets were among the first products ever produced by the company, which was renamed the Thomas E. Wilson Company in 1915, after its then-president. Over the years, Wilson has perfected its tennis racquets, making them among the most desirable in the sport, and the company has entered into partnerships with various high-profile tennis players over the years. Such athletes include Jack Kramer, who worked with Wilson to produce a line of signed tennis racquets in the late 1940s, which were sold for many decades. Today, the brand is used by dozens of star tennis players, many of whom are part of the company’s advisory staff. These athletes include tennis stars such as Roger Federer, Serena Williams, and Venus Williams.

Standing alongside Wilson as one of the oldest tennis brands, Dunlop has existed for over 130 years. Created in 1889 as a tire company, Dunlop began producing tennis equipment in 1923, patenting a new brand of tennis ball with greater quality and consistency. A decade later, in 1932, the company introduced the Maxply tennis racquet, which quickly became the world’s leading tennis racquet for 50 years, being used by tennis legends such as Rod Laver, Virginia Wade, and John McEnroe. In 1962, Rod Laver, one of the sport’s great players, won all four Grand Slams in a single year while using Maxply racquets. In 1980, Dunlop launched the first-ever injection-molded carbon fiber racquet, the 150G, which was followed by the 200G in 1982. In addition to tennis equipment, Dunlop sells squash, padel, and badminton equipment. Their tennis racquets are still popular today and are used by athletes such as Kevin Anderson and Jamie Murray.

A newer entrant into the tennis manufacturing world, Head Tennis began producing tennis equipment in 1970, after being founded as a skiing company in 1950. Head was responsible for creating the first tennis racquet with an aluminum frame, which was created for tennis pro Arthur Ashe, who used it to defeat opponent Jimmy Connors at Wimbledon in 1975. This racquet, known as “the Arthur Ashe Competition,” quickly became Head’s most famous racquet, and the brand was used by many other tennis stars, including Guillermo Vilas and Thomas Muster. In 1998, Head patented and produced the first titanium tennis racquet, a groundbreaking innovation in the sport. Today, Head produces tennis racquets with Graphene technology and is still widely used. Famous tennis pros such as Novak Djokovic, Alexander Zverev, and Maria Sharapova have all been known to use Head racquets.

One of the many popular companies that produced tennis racquets in the past, Prince has slowly faded in popularity in recent years, but it remains one of the many notable tennis companies in existence. The company was founded in 1970 by Robert H. McClure, who named the company after his hometown of Princeton, New Jersey. Initially a manufacturer of tennis ball machines, the company soon went on to produce racquets. Prince’s first tennis racquet was actually developed by Howard Head, the later founder of Head Tennis, who would go on to produce his own racquets. The aluminum Prince racquet designed by Head was one of the first oversized tennis racquets to be produced, but though it was technically patented first, it was preceded in its development by the Bentley Fortissimo racquet, and its patent was thus invalidated. Though Prince racquets have been used by a number of famous athletes over the years, among them Lucas Pouille and Iga Swiatek, in recent years, the brand has fallen out of style. However, some notable tennis athletes do still use Prince racquets, including John Isner of the United States, Nicolas Kicker of Argentina, and Pablo Andújar of Spain.

Yonex is another notable tennis company that began in an entirely different industry. Founded in 1946 by Japanese businessman Minoru Yoneyama, the company originally produced wooden floats for fishing nets and then went on to develop badminton racquets after the business of wooden net floats was superseded by plastic. The company’s first tennis racquet was developed and produced in 1969, and over the years, the company developed numerous variations on their tennis racquets, including the first “isometric” tennis racquet in 1980. Yonex tennis racquets have been used by a number of star tennis players, including Grand Slam Champions such as Billie Jean King and Martina Navratilova, as well as other famous athletes like Monica Seles. Today, Yonex continues to produce high-quality tennis racquets that are used by many well-known athletes in the sport, including Grand Slam Champion Stanislas Wawrinka, who used a Yonex racquet to win the Australian Open in 2014.

The oldest company on this list, Babolat was founded in the year 1875 when both tennis and badminton were still developing as professional sports. The company’s founder, Pierre Babolat, invented the first natural gut strings used for tennis racquets only one year after Walter Clopton Wingfield created the first rules for lawn tennis.

In 1925, the company again made groundbreaking changes to its products by developing the VS string, the first sustainable alternative for natural gut tennis strings. In the 1950s, Babolat was undoubtedly the most well-known tennis brand in the world and the first choice for players in numerous countries, from Argentina, to America, to Japan, and everywhere in-between. In 1955, the company invented its first nylon string, and in the 1960s, it patented a large number of racquet accessories, from leather grips to a specialized coating to protect strings. Accessorizing one’s racquet in this way soon became known as “Babolising” a racquet. The company gained further prominence in the 1980s when star player Björn Borg used Babolat racquets to help him secure hundreds of victories. Further innovations followed in the decades afterward, and today, Babolat racquets are still used by many star athletes in tennis, most notably Spanish phenom Rafael Nadal.