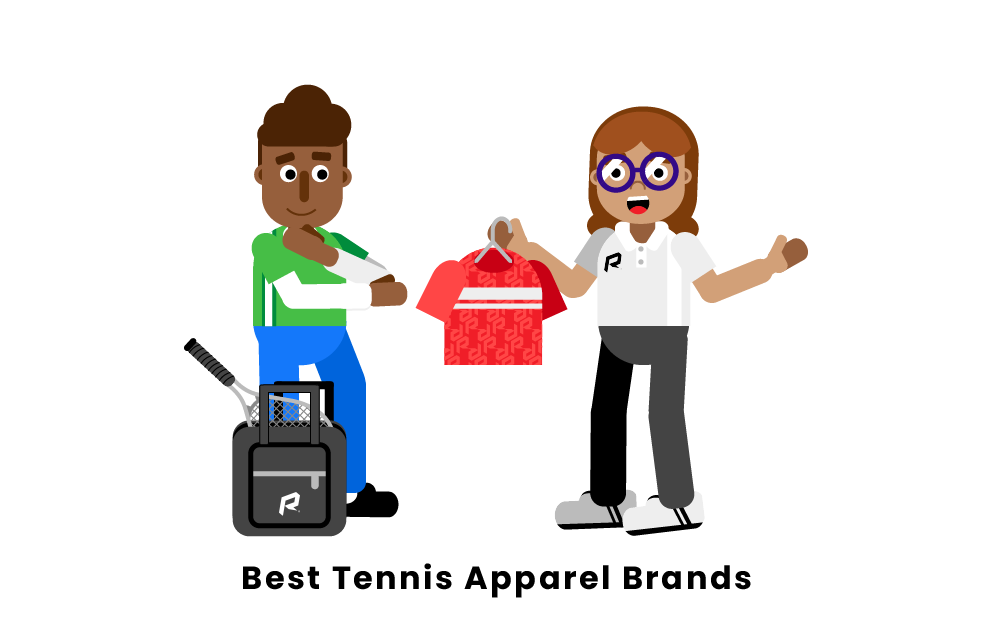 Tennis is a sport that requires specific attention to detail when selecting what types of shoes, rackets, racket strings, and balls are used in competition. Many professional tennis players have spent long periods of time working with and determining which brands produce their most preferred forms of apparel and equipment. Read on to learn about the top six best tennis apparel brands.

What are the most popular tennis apparel brands?

Nike is a general sports apparel company founded by the University of Oregon’s Phil Knight. Knight was a track athlete and began the company with his coach as a way to market running shoes. Ever since being created in 1964, Nike has expanded into multiple other sports apparel industries. Nike began selling tennis shoes in 1973 at the Rainier International Tennis Classic in Seattle, Washington. Since starting with tennis shoes, Nike has since expanded to tennis clothes and socks. Nike Tennis was greatly boosted by signing John McEnroe (1978) and Andre Agassi (1986) to major shoe deals. Nike had a knack for discovering talented young tennis players and signing them to sponsorship deals. Eventual tennis greats Roger Federer and Rafael Nadal signed deals with Nike at the ages of 16 and 14, respectively. Nike then focused heavily on women’s tennis apparel after signing deals with Maria Sharapova and Serena Williams.

Adidas was started in Bavaria, Germany, in 1924, in the basement of shoemaker Adi Dassler. It was officially founded as a sports apparel company in 1949. Starting with tennis shoes, Adidas has since expanded into tennis clothes, socks, backups, and water bottles. Adidas began making leather tennis shoes in 1963. The company named the shoe after Robert Haillet, who was a French tennis player. Eight years later, an American named Stan Smith wore the Robert Haillet while playing his way into the number one world ranking. By 1978, the shoe was renamed after Smith. Since then, many other tennis players have worn Adidas tennis shoes and received sponsorships for doing so. In the 1980s, women’s tennis legend Steffi Graff wore the iconic three-striped shoes. Currently, Austrian tennis player Dominic Thiem and Germans Alexander Zverev and Angelique Kerber are sponsored by the company and use Adidas shoes and clothes.

Wilson started in 1913 with the intention of finding uses for byproducts created from meatpacking plants. One of those original uses was the production of tennis racket strings. In 1915 the company was led by Thomas E. Wilson, for whom it was eventually named. From there, Wilson became a sporting goods company. Wilson produced baseball shoes, tennis rackets, basketballs, and footballs in its early years. Since then, its tennis department has expanded to tennis balls, bags, strings, and even more industrial types of equipment like stringing machines and portable ball machines. Currently, the Wilson tennis ball is the official ball of two tennis grand slams: The U.S. Open and The Australian Open. Wilson has sponsorships with plenty of tennis stars. There is a long list of those who use their tennis rackets, including Roger Federer, Simona Halep, Stefanos Tsitsipas, Aryna Sabalenka, Andrey Rublev, and Madison Keys.

Lacoste is a French sportswear company founded in 1933. After a successful tennis career, René Lacoste founded the organization with entrepreneur André Gillier. The company logo is a crocodile due to Lacoste’s nickname. Given to him when he was a player, René Lacoste was called “the crocodile” after he won a bet with his tennis captain. The bet was that if René won his next match, his captain would buy him a crocodile leather suitcase. Like the apparel sold by Lacoste the company, René wore a crocodile patch on his tennis polo. Today, Lacoste sells luxury sportswear such as polos, bags, watches, sunglasses, shoes, and jackets. The company is the official sponsor for the French Open, one of the four tennis grand slams. Currently, numerous tennis players wear Lacoste clothes when they compete, including tennis great Novak Djokovic. Some other players that wear Lacoste gear include Danil Medvedev and Roberto Bautista Agut.

Asics is a shoe and apparel company founded in Japan in 1949. The company made its first shoes, basketball shoes, in 1950. Eventually, Asics expanded into wrestling shoes and running shoes in the same decade. Once the company had made waves in track and field, they expanded again in the 1970s. At the time, the company was called Onitsuka Tiger. They merged with a company called GTO to form “Asics.” From there, the company began to make tennis shoes, along with baseball cleats and their older products. Since then, Asics tennis shoes have become a staple brand used in professional tennis. On top of tennis shoes, Asics also produces other types of tennis apparel such as shirts, shorts, and socks. Wildly popular tennis player Novak Djokovic wears Asics shoes. Some other famous tennis players that wear Asics shoes while competing are Gael Monfils, David Goffin, and Petra Martić.

Fila began in 1911, when it was founded by two brothers in Biella, Italy. Originally a textile company, Fila eventually became a fashion-based clothing producer. Fast forward to the 1970s, Fila decided to become more involved in a quickly advancing competitive sportswear market. Aiming to attack a global sports market, Fila’s first focus for sports sponsorships was tennis. The company made waves when it secured an endorsement with Swedish tennis great Bjorn Borg. Borg was not only a great tennis player but also marked a beginning of growth in tennis popularity. Since then, Fila’s tennis shoes and clothes have only grown in popularity along with tennis. Initially a fashion company, Fila emphasizes style in creating tennis shoes and apparel. The company also makes products like water bottles and tennis bags. Other tennis players that currently use Fila products include Ash Barty, Karolína Plíšková, and Diego Schwartzmann.