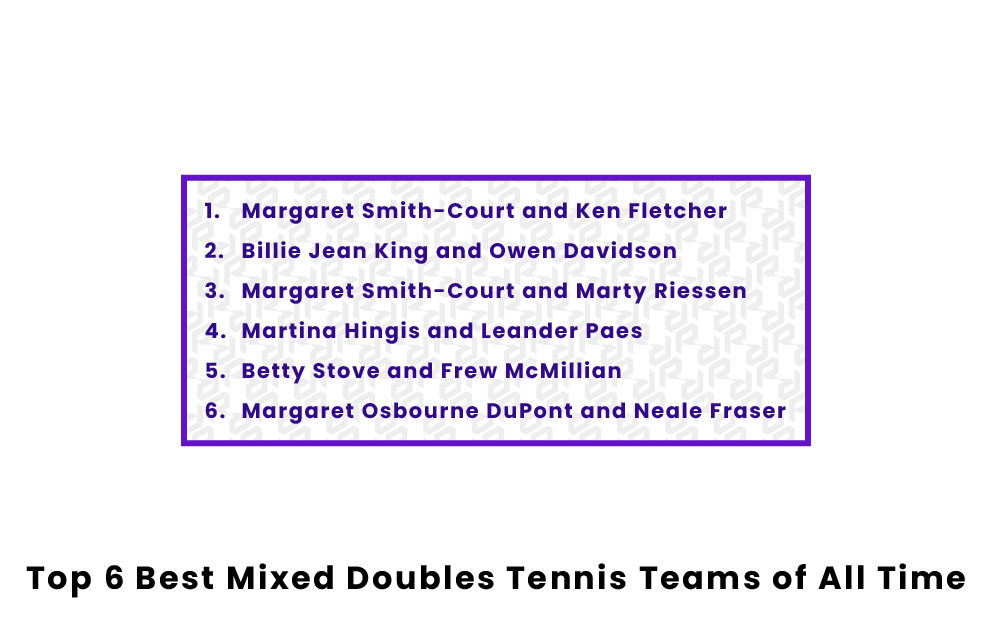 Who are the best mixed doubles tennis teams of all time?

While there is certainly room for some debate, the greatest mixed doubles tennis team of all time, by many accounts, is Margaret Smith-Court and Ken Fletcher. The duo managed to win the calendar Grand Slam together in 1963 by winning all four Grand Slam events, and were undoubtedly the most dominant pairing of the 1960s. In fact, Fletcher was the first male tennis player to accomplish the feat of being a part of a calendar Grand Slam team in mixed doubles. As for Court, she is one of the most successful women’s singles players of all time in addition to her mixed doubles success, winning 24 Grand Slam titles. Finally, as for their victories together, Court and Fletcher won 10 Grand Slams: the 1963 US Open, back-to-back Australian Opens in 1963 and 1964, three straight French Open titles in 1963, 1964, and 1965, and four Wimbledon titles in 1963, 1965, 1966, and 1968.

Another team with one of the greatest female players of all time, the duo of Billie Jean King and Owen Davidson comes in at number two on this list. Billie is one of the most well-rounded tennis players ever, and in addition to her well-known activism for women’s rights, she won 39 total Grand Slam titles (12 singles, 16 women’s doubles, and 11 mixed doubles). As for Davidson, he followed up Fletcher’s feat of winning the calendar Grand Slam in mixed doubles by doing so in 1967, although he only won three of the four events with Billie. Since she was unable to participate in the Australian Open that year, he won that tournament with Lesley Bowery. As for the tournaments that the two did win together, they won the 1967 French Open, three US Opens in 1967, 1971, and 1973, and four Wimbledon titles in 1967, 1971, 1973, and 1974, for a total of eight Grand Slams.

The second team to include all-time great Margaret Smith-Court on this list, she and Marty Riessen check in at number three on this list. Court won 10 of her 19 mixed doubles titles with the aforementioned Ken Fletcher, and she won six more in this pairing with Riessen. Perhaps most impressively, Court is one of only three women to have what is known as the career boxed set. In other words, she won every Grand Slam title she could possibly win (singles, women's doubles, and mixed doubles at all four Grand Slam tournaments). In Riessen’s case, he won six of his seven mixed doubles titles with Smith-Court. At the peak of their pairing together, the two were ranked number three in the world. The six titles the pair won consisted of three US Open titles in 1969, 1970, and 1972, the 1969 French Open and Australian Open Championships, and the 1975 Wimbledon title.

The most modern pairing on this list, Martina Hingis and Leander Paes are the fourth-best mixed doubles pairing of all time. Paes is one of the greatest doubles players to ever play, winning 18 total titles between men’s doubles (10) and mixed doubles (eight). Four of those titles came playing with Martina Hingis, who herself was an accomplished singles player early in her career before teaming up with Leander. In her singles career, Martina made 12 Grand Slam singles finals and won five, all between 1997 and 1999. At the end of her career, she teamed up with Leander, and they did all of their damage in a short period of time together, winning the Australian Open, US Open, and Wimbledon in 2015, then completing their career Grand Slam together in 2016 at the French Open. Martina also won three other mixed doubles titles, two with Jamie Murray and one with Mahesh Bhupathi.

The number five pairing on this list is the duo of Betty Stove and Frew McMillian. Betty was a successful doubles player throughout her career, winning six Grand Slam mixed doubles titles (four with Frew) and four women’s doubles grand slam titles. In Frew’s case, he won one additional mixed doubles Grand Slam title in addition to his four with Stove. The pair had all of their success together at Wimbledon and the US Open, making nine total finals between those two tournaments and winning the former in 1978 and 1981, while winning the latter back-to-back in 1977 and 1978. The pair also were runners-up at Wimbledon in 1977 and 1979 and at the US Open in 1976, 1979, and 1980. While they did not have any success together at the Australian Open or French Open, their run of consistency at Wimbledon and The US Open was enough to earn them a spot on this list.

While the ten teams listed below did not quite make the top six, they still deserve some recognition as honorable mentions. They are listed in alphabetical order by the second player’s last name.

What is the best men's doubles tennis pair of all time

There is little debate amongst tennis historians that the best men’s doubles pair of all time in tennis is the Bryan brothers, Bob and Mike. Together, they won an astonishing 16 doubles titles together, including winning every Grand Slam title at least twice. Their brotherly chemistry came naturally to them, with Bob playing right-handed and Mike playing left-handed, and it was a key component in their on-court success, allowing them to stay together for a long time.

What is the best women’s doubles tennis pair of all time?

Similar to the Bryan brothers on the men’s side, the women’s doubles pairing of Martina Navratilova and Pam Shriver is widely considered to be the greatest of all time. They won their first title together in 1981 at Wimbledon, and they would go on to win 21 Grand Slam titles together, including the calendar Grand Slam in 1984. Overall, they won 79 of the 104 tournaments they played together and had 390 match victories during that time.

Which mixed doubles tennis teams have won the most Grand Slams?