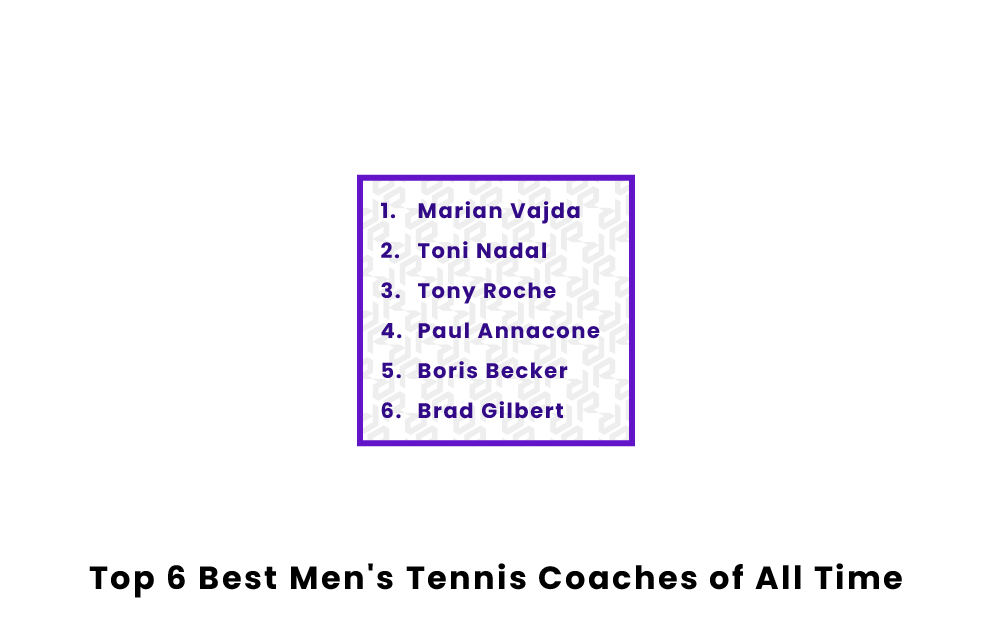 In most sports, a coach plays an integral role during a game/match. In tennis, however, this is not the case. Coaching during a match is frowned upon in tennis, so players are often on their own. It is before and after a match that a tennis coach earns their money and gives their support and knowledge to their player. Below, six of the most successful coaches in the history of men’s tennis are ranked and discussed.

Who are the best men’s tennis coaches of all-time?

The uncle and former coach of all-time great Rafael Nadal, Toni Nadal, comes in at number two on this list. In 1990, while coaching other young tennis players at the Manacor Tennis Club, Toni began coaching his nephew Rafael Nadal in 1990 when Rafael was just four years old. The two remained together for 27 years until 2017, and in that time, Toni coached Rafael to sixteen Grand Slam victories. The uncle-nephew combination won ten French Opens (2005-2008, 2010-2014, 2017), three US Opens (2010, 2013, 2017), two Wimbledons (2008 and 2010), and the 2009 Australian Open. Since the two split in 2017, Nadal has won six more Grand Slams, but his uncle’s impact on his growth cannot be understated. In 2021, Toni began his next coaching chapter, beginning to coach a young Canadian player in Félix Auger-Aliassime.

A former top tennis player, Lennart Bergelin ranks number three on this list. After a successful playing career, Bergelin began coaching tennis legend Björn Borg in 1971 and was with him until 1983. During their thirteen-year partnership, Borg won all eleven of his Grand Slams, six of which came at the French Open (1974, 1975, 1978-1981), and the other five came in consecutive years at Wimbledon (1976-1980). During this five-year stretch at Wimbledon, Borg was undefeated for an impressive 41 straight matches. This allowed the two to become the first player-coach combination to win at least ten Grand Slam titles together in the Open Era. Additionally, Borg was a four-time runner-up at the US Open under the leadership of Bergelin, making the final in 1976, 1978, 1980, and 1981.

The first player on this list to coach multiple players to a Grand Slam victory, Paul Annacone checks in at number four. Annacone has coached several players throughout his career, most notably legends Pete Sampras (1995-2002) and Roger Federer (2010-2013). Annacone had most of his coaching success with Sampras, leading the American to nine of his fourteen career Grand Slams including five Wimbledon championships (1995, 1997-2000), three US Opens (1995, 1996, 2002), and the 1997 Australian Open. Moreover, as one of Roger Federer’s coaches, Annacone played a part in helping Roger win the 2012 Wimbledon title, making it his tenth Grand Slam as a coach. In addition to Sampras and Federer, Annacone also coached Tim Henman (2003-2007), Stan Wawrinka (2017), and has been coaching the young American Taylor Fritz since 2018.

Another coach of Roger Federer, Severin Luthi, is the fifth greatest male tennis coach of all time. A fellow Swiss like Roger, Severin has been with him since 2007. While others like Paul Annacone have come and gone throughout Roger’s career, Luthi has been the mainstay on his coaching team. Under Severin, Roger has won Wimbledon on four occasions (2007, 2009, 2012, 2017), the Australian Open four times (2007, 2010, 2017, 2018), the US Open twice (2007, 2008), and the 2009 French Open. In total, eleven of Roger’s twenty Grand Slams have come under the leadership of Luthi. In addition to coaching Roger, Luthi has also coached the Swiss Davis Cup team. In 2014, the Swiss won the Davis Cup under the guidance of Luthi.

Another man to have coached multiple players to Grand Slam victories, Brad Gilbert, rounds out this list at number six. In addition to his work for ESPN commentating on tennis, Gilbert has coached five men throughout his career. His most notable work came with fellow American Andre Agassi, as the two won six of Agassi’s eight Grand Slams together during their eight-year partnership from 1994-2002. Their victories included the 1999 French Open, three Australian Opens (1995, 2001, 2003), and two US Opens (1994 and 1999). After his run with Agassi ended, Gilbert would move on to coaching another American, Andy Roddick, in 2003. While they were only together for one year, they made it memorable, winning the 2003 US Open in their home country together for Andy’s only career Grand Slam. Gilbert has since coached Andy Murray, Alex Bogdonavic, and Kei Nishikori, although he did not win Grand Slams with them.

Who is the best men’s tennis coach?

With twenty Grand Slam victories, Marian Vajda is the greatest men’s tennis coach of all time. Vajda led Novak Djokovic to twenty of his twenty-one career Grand Slams during their two stints together between 2006 and 2022. Presently, Vajda is working with a young, talented player in Alex Molcan, with whom he will try to replicate the success he had with the legend that is Novak Djokovic.

Who is the best women’s tennis coach?