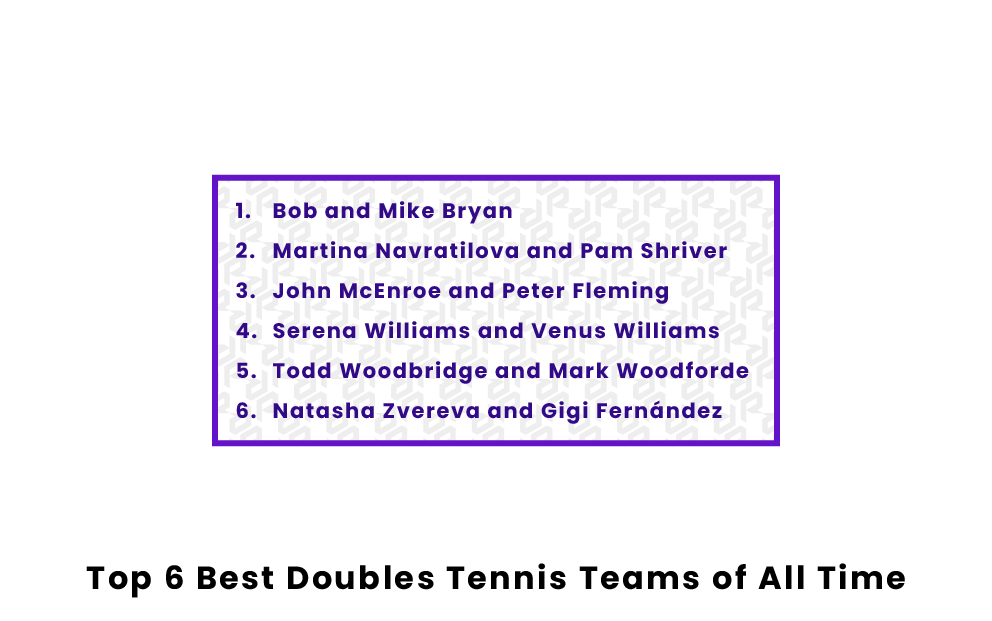 Doubles tennis is one of the most challenging sports, requiring two people to play as one entity and remain in sync throughout the most intense of volleys. Through the years, a few duos have risen above the rest; this list will highlight the top six doubles tennis teams of all time.

Who are the best doubles tennis players of all time?

Bob and Mike Bryan may be the most iconic and successful tennis doubles pairs the world has ever seen. The two twin brothers were pure magic on the court, able to play together in a way only a pair of siblings could, and since their styles of play complimented each other so well, success was inevitable. The team set numerous records, having won more tournaments than any other pair in the history of doubles tennis (119) and being the only team to have won every Major and the Olympic gold in one year.

Even after winning a gold medal in London during the 2012 Games, their success continued. By the end of the pair's career, they set even more records, such as being the ATP year-end number one doubles team 10 times, competing in seven consecutive men's doubles Grand Slam finals (2005-2006), and being the only doubles pairing in history to have completed the "Doubles Career Grand Slam" achievement.

Martina Navratilova and Pam Shriver are the most remarkable women's duo pairing the tennis world has ever seen. Made up of two of the sport's most accomplished female players, they were dominant when the two joined forces. Together, the pairing managed to win a stunning 21 Grand Slam Doubles Titles, the most of any women's pairing of all time, and picked up another five Wimbledon Championships during their time together as teammates.

A few of the most impressive accolades and feats they achieved were unprecedented; for example, the duo sustained a 109-match winning streak spanning from April 1983 to July 1985. Together they also managed to win 10 WTA Tour Championships and be named the WTA Tour Doubles Team of the Year eight consecutive times within only 11 years. The duo's careers were recognized when Martina Navratilova (2000) and Pam Shriver (2002) were inducted into the International Tennis Hall of Fame.

John McEnroe and Peter Fleming combined forces to become one of the most incredible tennis duo partners the world has ever seen. Made up of two individually incredibly successful players, John McEnroe (a man who was number one in doubles for a total of 170 weeks) and Peter Flemming (who helped win three Davis Cups for the United States), this deadly combination of skills made for massive success on the court, and the resume they had together by the end of their time as a duo is awe-inspiring.

The two combined forces make up what some call the most incredible combination of talent ever seen. They managed to win 52 total titles together and seven Grand Slams, an impressive feat in itself. While they had no success in the Australian Open or the French Open, they made up for it by winning four Wimbledon and three U.S. Open titles.

Serena and Venus Williams were among the greatest sister teams tennis had seen; their dazzling skills and athleticism made them a treat to watch on the court together. Even before they teamed up, their careers were widely successful, as shown by their first and second ranking in the world in singles after the 2002 French Open, making them the first set of sisters to achieve that feat. So when they joined forces, it was not surprising that their dominance continued.

Their resume as a duo is impeccable and as impressive as any other team on this list. It includes accolades such as winning 22 total doubles titles and 14 Grand Slam Women's Doubles titles; four at the Australian Open, two at the French Open, six at Wimbledon, and finally, two at the U.S. Open. The sisters even managed to win three Olympic Gold Medals in the doubles event at three different Olympics.

Todd Woodbridge and Mark Woodforde were commonly referred to as "The Woodies" due to their similar last names. The Australian duo was dominant during the time their pairing lasted; for a while, they were considered the greatest doubles team ever. The pairing held the record for the most ATP Doubles Titles, with 61, until 2010, when the Bryan brothers finally broke it. Regardless of their lack of still-standing records, their skills and accolades speak for the team's success.

The Woodies' resume included winning an Olympic gold medal for their home country of Australia during the 1996 Atlanta Summer Games, as well as managing to win a Davis Cup for their home country in 1999, the first one the country had won in 13 years. The team also won a stunning 11 Grand Slam titles, the third-most of any pairing in tennis history, no small feat by any means, and another reason for The Woodies' inclusion on this list.

Natasha Zvereva and Gigi Fernández are one of their era's top women doubles partners, trailing only the legendary team of Martina Navratilova and Pam Shriver in total titles won together. The pair complemented each other's playing style very well, and due to this, they found no shortage of success during their time together as a duo. A few of the many impressive achievements the pair earned included winning 14 Grand Slam Doubles Titles, the second-most of any women's pairing, and securing all four Grand Slam titles during the 1993 season.

Another major feat the duo accomplished included holding the second-longest major doubles title streak when they won six titles in a row from the 1992 French Open to the 1993 Wimbledon title. Their unquestionably impressive careers were recognized in 2010 when Natasha Zvereva and Gigi Fernández were inducted into the International Tennis Hall of Fame.

Who is the best men’s doubles tennis team of all time?

Who is the best women’s doubles tennis team of all time?

Martina Navratilova and Pam Shriver are the best women's doubles tennis team of all time. Not only did the duo manage to pull off a 109-Match winning streak and win five Wimbledon Championships together, but they also won 21 Grand Slam Doubles Titles, the most of any women's pairing of all time. To even further prove the point of their dominance, both Martina Navratilova and Pam Shriver managed to get inducted into the International Tennis Hall of Fame.

Which doubles tennis teams have won the most grand slams?

The twin-brother duo of Bob and Mike Bryan have won the most Grand Slam titles out of every tennis duo in history. Their stunningly impressive record of 16 Grand Slam titles overall is a record that is unlikely ever to be broken. Considering their other feats, such as winning 119 tournaments, more than any other pair in the history of doubles tennis, it is unsurprising to find their name associated with yet another record.