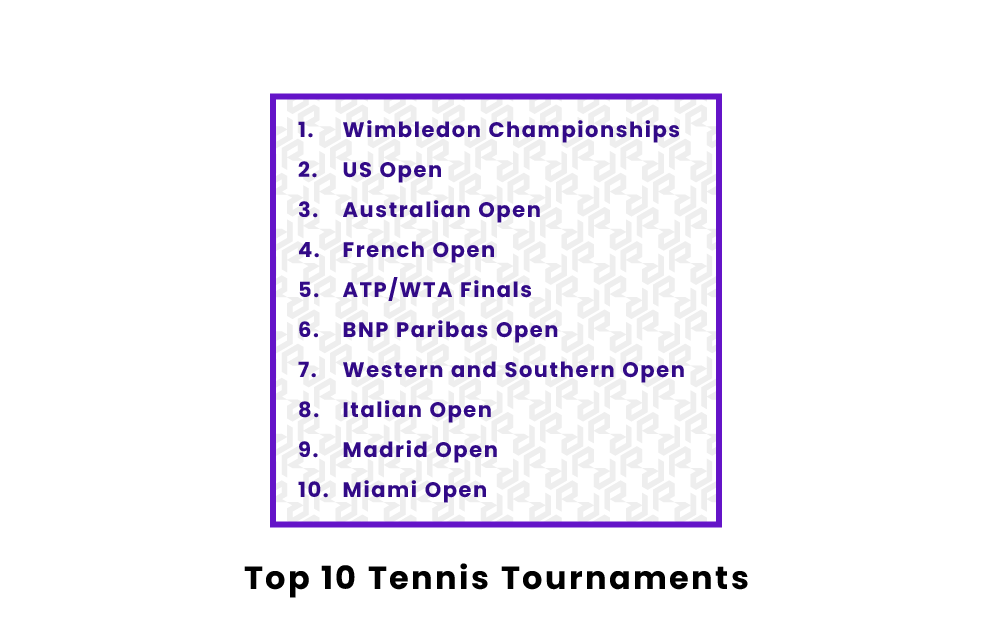 Every year, The Association of Tennis Professionals (ATP) and the Women’s Tennis Association (WTA) hold dozens of tennis tournaments around the world for their tour members. While the four major Grand Slam events often get all of the attention, there are several other tennis tournaments that attract the biggest names and provide high-quality tennis as well. Below, the ten biggest tournaments are ranked and discussed.

What Are The Biggest Tennis Tournaments in the World?

According to most of the tennis world, the greatest tennis tournament in the world is the Wimbledon Championships. As one of the four Grand Slam events, Wimbledon gets a lot of attention, and rightfully so. Played on a grass surface, the tournament has taken place at the All-England Club in London since 1877 (1884 for women), only pausing for the World Wars (1915-1918, 1940-1945) and the COVID-19 Pandemic (2020). The top players in the world all play in this tournament when healthy, and for many of them, it is their biggest dream to win the tournament.

The second of the four Grand Slams, the United States Open takes the number two spot on this list. It has been held every year since it began in 1881 (1887 for women) as the US National Championships before being renamed the US Open in 1968. The tournament was played at several locations across the United States for years before settling down in the Queens borough of New York City in 1968. The event has been a hard-court event since 1978. However, in the past, it has been played on both grass (1881-1974) and clay (1975-1977).

The third Grand Slam event on this list is the Australian Open. The first edition was held in 1905, with a women’s tournament being added in 1922. Like Wimbledon, the tournament paused for the World Wars. Early on, the top players did not always travel to Australia, but that has changed since jet travel has become more common. Sydney, Brisbane, Melbourne, and Adelaide all rotated as hosts before the tournament permanently settled in Melbourne in 1988. From 1905-1987, the Australian Open was held on grass before becoming a hard-court event in 1988.

The last of the Grand Slam events on this list, the French Open comes in at number four. The first men’s tournament took place in 1891 as the French Championships, with the women following suit in 1897. Currently a clay court event, the French Open takes place at Stade Roland Garros, where it has been since 1928. Originally, until 1907, the French Open was actually a sand event, something that is not common in the modern day. Like the other tournaments outside the US, the French Open had to pause for the World Wars.

After the four Grand Slams, the ATP/WTA Tour Finals are the most intriguing tennis events in the world. The ATP event has taken place since 1970, with the WTA creating their event two years later. Both are played on hard court surfaces. For both tours, the top eight players in the rankings at the end of the year qualify for the tournament, and they play a round-robin style event before the top four players advance to the semifinals. The men’s and women’s events have each been played in several venues around the world since their inception.

Checking at number six on this list is the BNP Paribas Open. Also known as Indian Wells, the event is a hard-court event that takes place in Indian Wells, California. The event was first played in 1974 and has been at Indian Wells since 1987. The tournament attracts hundreds of thousands of fans each year, with its attendance numbers even being comparable to Wimbledon in some years. Another hard-court event, the main stadium at the venue sits 16,000 fans, second only to the US Open’s main stadium, Arthur Ashe Stadium.

The second oldest tournament in the United States after the US Open, the Western and Southern Open in Cincinnati, Ohio, takes the number seven spot. Founded in 1899, the event has been paused a few times throughout its history, but it has taken place the vast majority of years since 1899. The tournament is a hard-court event that is used as a US Open tune-up event in the modern day.  Originally known as the Cincinnati Open, the event had several names before becoming the Western and Southern Open in 2011.

The second clay court event on this list, the Italian Open comes in at number eight. The first edition of the tournament was held in 1930, and as a clay event, it is seen as one of the key tune-up events for the French Open. All editions of the tournament have taken place in Rome, Italy, at the Foro Italico since 1935. Interestingly, there was no tournament from 1936-1949, likely due to World War II and its aftermath, but there has been no break in the event since.

A similar event to the Italian Open, the Madrid Open takes the number nine spot on this list. Like the Italian Open, the Madrid Open is a clay court event that is viewed as one of the key events to prepare players for the French Open. The youngest event on this list, the first edition of the tournament took place in 2002 in the Madrid Arena, and it was originally a hard-court event. The event moved to its current location, the La Caja Mágica, in 2009, where it became a clay court event.

Coming back to the United States for the final place on this list, the Miami Open claims the number ten spot on this list. The tournament was created in 1985 and takes place in Key Biscayne, a peninsula across Biscayne Bay from Miami. A tune-up event for the US Open, the Miami Open is a hard-court event. The tournament is unique, however, in that its courts play slower than a typical hard court, leading to longer rallies and matches. This can become an issue in the heat of Miami.

What is the biggest tennis tournament in the world?

While all four of the Grand Slam events attract the best players and millions of fans around the world, the Wimbledon Championships are considered by many to be the biggest tennis tournament of them all. Founded in 1877, the tournament is the oldest of the four Grand Slams, and players who win the event often consider it to be the biggest accomplishment of their careers. Every year, millions from around the world either travel to London or tune in on television to witness this historic event.

What are the biggest tennis grand slams?

There are four events in tennis that are considered to be Grand Slam Events. They are the Wimbledon Championships, the United States Open, the Australian Open, and the French Open. These four events are considered to be the most prestigious, attract the best players, and have the largest audiences both in person and around the world on television. The legacy of a tennis player's career is often largely based on how many Grand Slam events they win.