Top 10 Tennis Rivalries of All Time 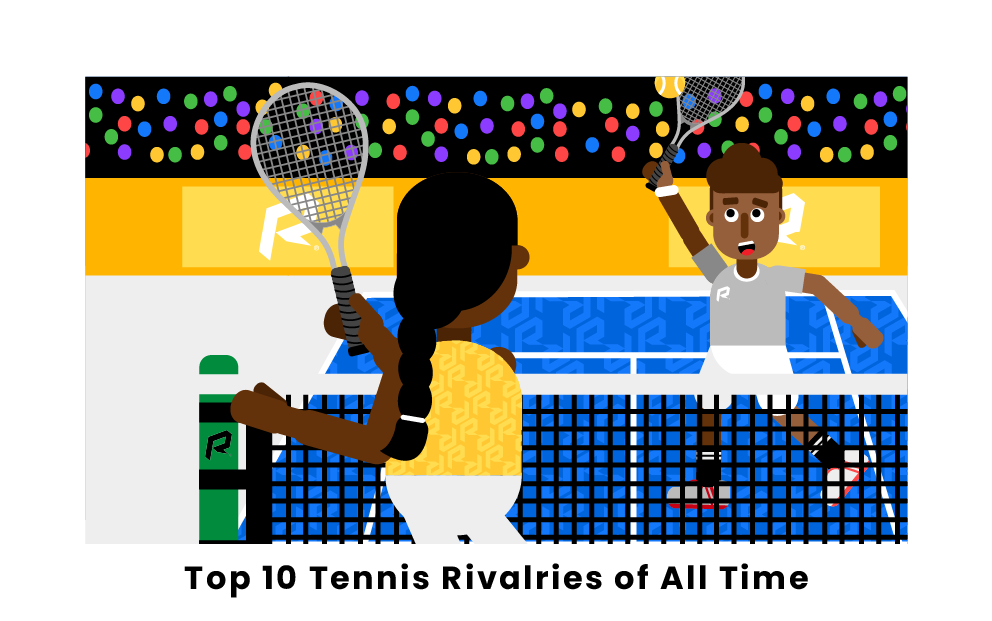 Throughout the history of tennis, dynamic rivalries between dominant players with big personalities have attracted public fascination and served to increase the sport’s popularity. Early rivalries like Evert vs. Navratilova and McEnroe vs. Borg helped shape the sport, while the Big Three of Federer, Nadal, and Djokovic define tennis today.

What are the biggest tennis rivalries of all time?

Martina Navratilova and Chris Evert are two of the greatest tennis players of all time, and for much of the 1970s and 80s, they shared the court, alternating the number-one ranking between them and racking up a ton of titles along the way. Evert came onto the scene first, but both were young female tennis prodigies who turned pro as teens. From 1975 through the late 80s, the pair locked down the first and second-ranked spots in women’s tennis. Navratilova had more success in doubles and was known to be superior on fast surfaces, whereas Evert excelled on clay.

Rafael Nadal and Roger Federer are two of the most dominant tennis players of the modern era. The pair first met in 2004, when 17-year old Nadal, then ranked 34th, upset first-ranked Federer in straight sets at the Miami Masters. The dynamic of a young star challenging an established master has persisted throughout the rivalry, with Nadal holding the edge in total matches won, finals, and majors wins. The pair’s absolute dominance continued from 2005 until 2011 when Novak Djokovic captured the number-one ranking. This period was particularly competitive and memorable in the rivalry, with their 2008 Wimbledon final ranked among the greatest matches ever.

The prolonged competition for the best in the world between Novak Djokovic and Rafael Nadal is one of the greatest rivalries in modern tennis. Djokovic first defeated Nadal in 2007, in their third match facing each other. However, any competition between the two was insignificant compared to the rivalry between Nadal and Roger Federer. This changed at the 2010 US Open when Djokovic took Nadal all the way to the final, where Nadal prevailed in four sets. In the first years of their rivalry, Nadal maintained an edge, but Djokovic has been dominant in recent years, spending a record-setting period ranked number one.

In the late 1970s, John McEnroe and Björn Borg battled in an exciting, dynamic rivalry that was over too soon. Both players were gifted, young stars who quickly achieved dominance upon going pro, with Borg entering the tour four years before McEnroe. The two first met in 1978 and played 14 matches over the course of their rivalry, splitting them evenly. The matchup was known as “Fire and Ice,” after their wildly contrasting demeanors on the court: McEnroe was feisty and argumentative, while Born was calm and methodical. The rivalry ended suddenly when Björn Borg unexpectedly retired after losing to McEnroe at the 1981 US Open.

Boris Becker and Stefan Edberg were tennis rivals in the late 1980s and early 90s. These wildly popular stars served as the faces of the sport for their generation and inspired a young Roger Federer to take up the racket. Becker won the majority of their matches by a healthy margin, but Edberg proved a reliable foe, especially in the famous three consecutive Wimbledon Finals that serve as the essence of the rivalry. Becker was favored the first time in 1988, but Edberg won a surprise victory. Over the next two years wins were traded back and forth, with Edberg taking two of the three Wimbledon victories.

Serena Williams and Venus Williams have a friendly and competitive rivalry that has changed the course of modern tennis. Two of the greatest players in the history of the sport, the pair are sisters, with Venus one year older. Serena has come to dominate head-to-head, winning more regular matches, finals, and Grand Slams than Venus. The sisters quickly established themselves as fearsome doubles opponents when they won a Wimbledon doubles trophy and Olympic gold medals for doubles in 2000. Although Serena has been more successful in her singles career, the pair remain very close. Even today, a match between the sisters draws a major audience.

Novak Djokovic has reprised the dynamic of the original feud between Nadal and Federer, in which a young challenger overthrows and exceeds the current favorite. Although both men are among the best tennis players of their time, Djokovic’s ascent to dominance coincided with Federer beginning to lose his grip on supremacy. The rivalry between the two has been one of the most unpredictable and entertaining, with neither player in the matchup showing an advantage on a particular surface. These two men have been extremely evenly matched throughout their careers, with Federer getting more wins early but Djokovic maintaining the lead since 2011.

Billie Jean King and Margaret Court were two iconic pioneers of women’s tennis. Although both had long and successful careers, Court is typically acknowledged as the superior player, winning a majority of their head-to-head meetings and four of their five Major final matches. The rivalry between the players hinges on two infamous “Battle of the Sexes” matches in which a man competed against a woman. Both matches were held in 1973, and both were against Bobby Riggs. Court embarrassingly lost the first to a dominant Riggs. Four months later, King achieved a commanding victory against the same man, marking a milestone for women in tennis.

Pete Sampras and Andre Agassi had one of the greatest tennis rivalries of all time and one that defined the sport in the 1990s. Both players rose to success at an early age in the late 1980s. They first met in 1989, with then-favorite Agassi winning. Sampras quickly showed him up, defeating Agassi in the US Open final the following year. Throughout the 90s, the two traded number-one rankings, both earning fame, popularity, and titles along the way. Over the course of their careers, Sampras won more head-to-heads, including Grand Slam finals. However, Agassi earned a Career Grand Slam, an honor Sampras was unable to achieve.

Steffi Graf and Monica Seles shared a women’s tennis rivalry in the late 1980s and early 90s that was tragically disrupted. Steffi Graf had already enjoyed several years at number one when they first met in 1989, and won their first three matches. Monica Seles reversed the dynamic in 1991, taking the number-one ranking for the next two years. However, during a match in 1993, Seles was attacked and stabbed by a deranged Graf fan. The injuries were minor, but her play never recovered, and Graf ended up dominating through the end of their rivalry, with Seles only winning one head-to-head match following the attack.

John McEnroe and Jimmy Connors were two of the best tennis players in the world in the 70s and 80s. They were extremely competitive and faced each other 34 times at the top level of professional tennis. Their rivalry was heated, and they faced off in two Wimbledon Finals in 1982 and 1984. The rivalry has a score of 20-14 in professional matches with the advantage going to McEnroe. McEnroe also bested Connors in Grand Slam matches by a score of 6-3 over their careers. McEnroe and Connors continued their feud on the Senior Tour, as they faced off in multiple official and invitational matchups. To this day, they are not very fond of each other, and have been quoted as saying such.

Laver and Emerson were both Australian tennis players, and their rivalry is one of the most extensive in the history of tennis. The pair went head-to-head for 17 years, with a total of 72 matches played between the two. These matches originally took place in the senior amatuer circuit, with their rivalry reaching tennis’ biggest stage once Emerson went pro in 1968 and was once again eligible to compete against his foe. While Laver featured a dominant final record against Emerson, with a 51-21 record against his fellow Australian, Emerons actually held the upper hand in Grand Slam Tournament faceoffs with a final tally of 12-11.

Ivan Lendl and Boris Becker had an eight-year rivalry spanning from 1985 to 1993. Becker and Lendl’s rivalry stems in large part Becker’s status as a roadblock between Lendl and a Wimbledon Trophy. This was quite an accomplishment on Becker’s part, considering Lendl was able to secure two Australian Open titles and three US Open victories. Nonetheless, Becker defeated Lendl in the 1986 Wimbledon Final and twice in the semi-finals. That being said, Lendl was the winner of the rivalry overall, with an 11-10 overall record and an 8-6 Grand Slam record both in favor of Lendl.

What is the greatest tennis rivalry?

The greatest tennis rivalry of all time is the one between Chris Evert and Martina Navratilova. The two women controlled the top two rankings throughout the 1970s and 80s, maintaining a competitive dominance unmatched by any other tennis rivalry. The pair have played more matches and more finals than any other. The rivalry ended with a slight lead for Navratilova, but the pair was evenly matched throughout. The three-way rivalry among Roger Federer, Rafael Nadal, and Novak Djokovic, known as the Big Three, threatens to eclipse the rivalry between Evert and Navratilova, as one of the three men has won most of the Majors since 2003.

What is the longest tennis rivalry?

The longest tennis rivalry of all time is the one between Roger Federer and Rafael Nadal. Although Nadal has faced Novak Djokovic in more matches, no pair has been competing against each other longer than Federer and Nadal, who first met in 2004. Then 17-year-old Nadal shocked the world by upsetting the number-one Federer. The competition between the two has been fierce ever since. Along with Djokovic, the pair have dominated men’s tennis rankings and Grand Slam victories since the mid-2000s.

Which two tennis players have played each other the most?

Chris Evert and Martina Navratilova are the two tennis players who have played each other the most. Over a period of 15 years in the 1970s and 80s, Evert and Navratilova faced each other in 80 matches, a record for the modern era. Of those matches, 60 were finals, a testament to the excellence of both women’s play. At the end of the rivalry, Navratilova maintained a slight lead, both in overall matches won and finals victories.

Pages Related to Top 10 Tennis Rivalries of All Time