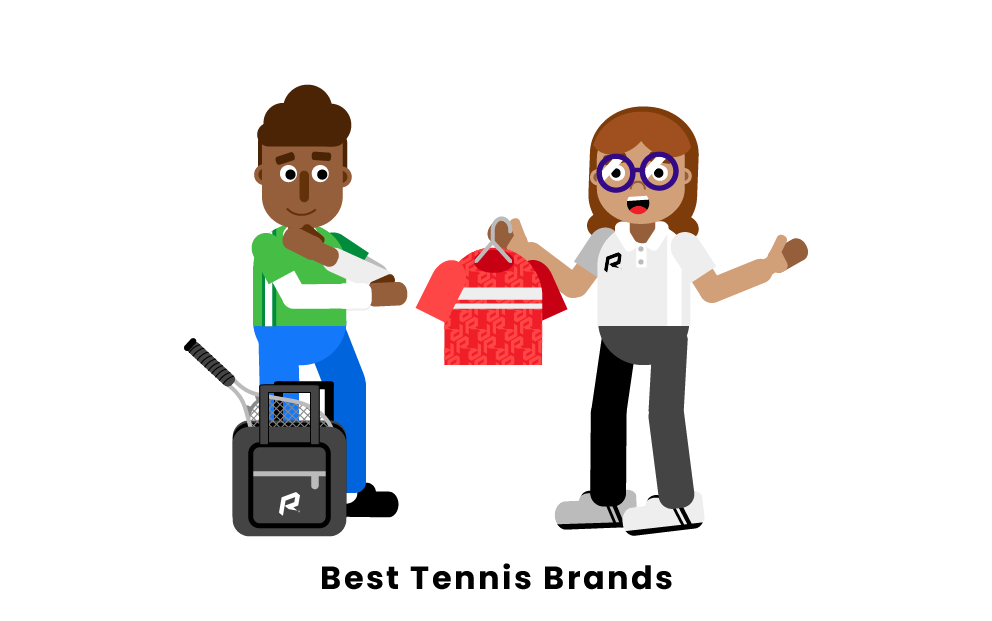 Tennis is a game that can be played one on one or in teams of two and uses racquets to serve or hit the ball over the net. It can be played recreationally or competitively. These top ten tennis brands are valued by players of all skill levels when choosing equipment for an upcoming match.

What Are the Most Popular Tennis Brands?

Wilson is a brand in the sports industry specializing in the manufacturing and production of sports equipment. The company is based in the United States and headquartered in Chicago, Illinois. The company was founded back in 1913 as a meat slaughterhouse. By 1914, the company began producing tennis racquet strings and took on a new image for the brand. Today, Wilson produces some of the most tech-savvy racquets on the market and is a well-established name for providing quality sporting goods equipment. The company is most well known for their Pro Staff line of racquets, but it also produces racquet dampeners, strings, and luggage. The brand is endorsed by many star athletes, including Roger Federer, Serena Williams, Grigor Dimitrov, and Petra Kvitova.

Babolat’s claim to fame is that they are the inventor of the tennis string and have developed a loyal fan base for their quality racquets across tennis, badminton, and padel. The company was founded in 1875 in France and is the oldest company specializing in racquet sports. Today, the brand is in over 100 different countries, 20,000 sporting goods stores, and 20,000 partner clubs around the world. It is well known for its Pure Aero racquet, training equipment, and numerous star tennis players on their team, including Andy Roddick, Fabio Fognini, Sara Errani, and Kirsten Flipkens.

Founded in Maryland, Head has been manufacturing tennis racquets since the 1950s,  and is now headquartered in Amsterdam. The brand grew in popularity and credibility in 1975 when Arthur Ashe and his Head racquet defeated Jimmy Connors at Wimbledon. The company produces tennis racquets and apparel/clothing, bags, grips, and other tennis equipment. The brand is also known for manufacturing alpine skis and is fairly profitable in that industry. Besides the legendary Arthur Ashe, many star players use this brand, including Novak Djokovic, Andy Murray, Andre Agassi, Maria Sharapova, and Christina McHale.

Prince is one of the most recognizable brands in tennis, with its logo “P” featured on each of their unique racquets. The company has declined in popularity in recent years but is famous for developing the first tennis ball machine. The company was founded in 1970 when inventor Bob McClure invented the tennis ball machine using vacuum parts in his garage in New Jersey. The company quickly grew in popularity as it was a new way to train beginners. Towards the end of the 1970s, the company shifted focus to producing elite quality racquets for tennis professionals and reached a height in popularity in 1995 when its Michael Change Signature racquet was named the number one ranked tennis racquet in the world. Players who use prince racquets include David Ferrer, Bob Bryan, Mike Bryan, Kveta Peschke, and Jelena Jankovic.

Nike is the leading manufacturer of sports apparel and footwear in the United States. The brand makes apparel for various sports, including tennis, basketball, baseball, football, soccer, and others. The company has a long-established name for high-quality and fashionable products and is very popular around the world. The company Nike, Inc. was founded in 1971 and is headquartered in Beaverton, Oregon today. In the tennis market, Nike produces tennis apparel and footwear and has been the sponsor of many top tennis players, such as Rafael Nadal, Maria Sharapova, Grigor Dimitrov, Serena Williams, and Madison Keys.

Adidas is the second largest sports manufacturer in the world behind Nike and is most popular in Europe. It is headquartered in Germany and has ties dating back to 1924. The company produces tennis apparel and footwear and has produced tennis equipment since the 1960s. It is a well-established brand throughout the world and easily recognizable with its iconic three-stripe logo. Adidas has sponsored pro tennis players such as Stan Smith, Ilie Nastase, Steffi Graf, and Ivan Lendl.

Yonex is a Japan-based company that produces and manufactures tennis racquets, badminton racquets, and golf equipment. The company started off making wooden corks and transitioned into badminton racquet production in 1957. It was not until 1982 that the brand made its first aluminum tennis racquet, and though it is one of the newer tennis brands on this list, it quickly gained a reputable name within the industry. It is well recognized as an international brand, with star players such as Monica Seles, Martina Hingis, and Lleyton Hewitt, who all used Yonex racquets during their careers. Current players who use the brand include Stan Wawrinka, Nick Kyrgios, and Angelique Herber. The brand looks to gain more traction in the industry in the future.

Dunlop Sports is another manufacturer of racquets for tennis, badminton, and squash. The company has a reputation for high-quality, innovative, and high-performance products. It was founded as a rubber manufacturing company back in 1889 and entered the sports market in 1910. The brand grew in popularity when star player John McEnroe won seven grand slams using the Dunlop racquet. He was the brand centerpiece for many years during his career and after. Recently the company was purchased by SRI sports, the Japanese-based sporting goods company. Current players who use Dunlop racquets are; Nicolas Almagro, Jurgen Melzer, Tommy Robredo, and Heather Watson.

Tecnifibre is one of the youngest brands on this list but has been growing in popularity recently. The brand has a focus of improving the potential of players through advanced racquet technologies. The company made its first racquet strings in 1983, but it was not until the 2000s that the company launched its first line of tennis racquets. Popularity of the brand greatly increased, and in 2013, the company had a partnership with ATP to become the official racquet of the 2013 ATP tour. The company has made its mark within the tennis strings industry with the development of the X-One, a synthetic multifilament string. Current players who use Tecnifibre racquets include Janko Tipsarevic, Denis Istomin, and Denis Kudla.

Volkl was originally founded as a manufacturer of skis, and within the tennis industry it targets intermediate and beginner players. They have introduced a series of new and innovative products within the racquet market, such as their Organix high-tech carbon material and Bio Sensor, an active vibration-dampening system within the racquet. The former legend and number one player in the world, Boris Becker, who won six Grand Slams, helped popularize and legitimize the brand during his playing days. The brand was founded in 1923 and is based in Germany, in recent years expanding into snowboards and outerwear as well. The company has not had many partnerships with tennis players over the years besides Becker, Liezel Huber and Laura Siguemund.

Lacoste is a sportswear and fashion company that produces clothing worn by many of the top tennis players in the world. Founded in 1933 by two former tennis players, the brand has been seen worn on the court for almost a century. Lacoste clothing focuses on providing a clean, sophisticated look, drawing from the prestige of the top tennis tournaments in the world. They also own the Tecnifibre brand that produces its equipment line. Top players, including Novak Djokovic, are sponsored by the brand and wear the Lacoste logo proudly.

ProKennex is a tennis racquet company based in Taiwan, founded in 1978. They make high-quality racquets for major racquet sports such as tennis, pickleball, and racquetball. ProKennex were the pioneers of graphite racquets, which they developed for badminton and tennis. They focus their research and development around kinetic energy, maximizing the amount of transferred energy between the ball and the racquet.

Asics is a shoe and clothing brand that was founded in 1949 in Japan. It originally started out as a basketball shoe manufacturing company but branched out to other sports as the company grew. Asics tennis shoes are quite popular today, and are worn by tennis star Novak Djokovic. They also produce comfortable and stylish clothing that is worn by tennis players all over the world.

What is the most popular tennis brand?

Wilson is the most popular tennis brand in the world. The brand has been making racket strings since 1914 and now makes some of the best and most advanced tennis rackets and gear available. In addition to being the official equipment sponsor of the USPTA, Wilson sponsors numerous tennis superstars, including Roger Federer, Grigor Dimitrov, Petra Kvitova, Milos Raonic, and Kei Nishikori.

What is the best brand of tennis racket?

What tennis brand sponsors the most players?

The tennis brand that sponsors the most players is Wilson. As of 2022, they have a whopping 28 total sponsorship deals with various professional tennis players, including Victoria Azarenka, Kei Nishikori, and Roger Federer. The closest competitor to Wilson is Nike, with 23 total partnership deals (as of 2022).