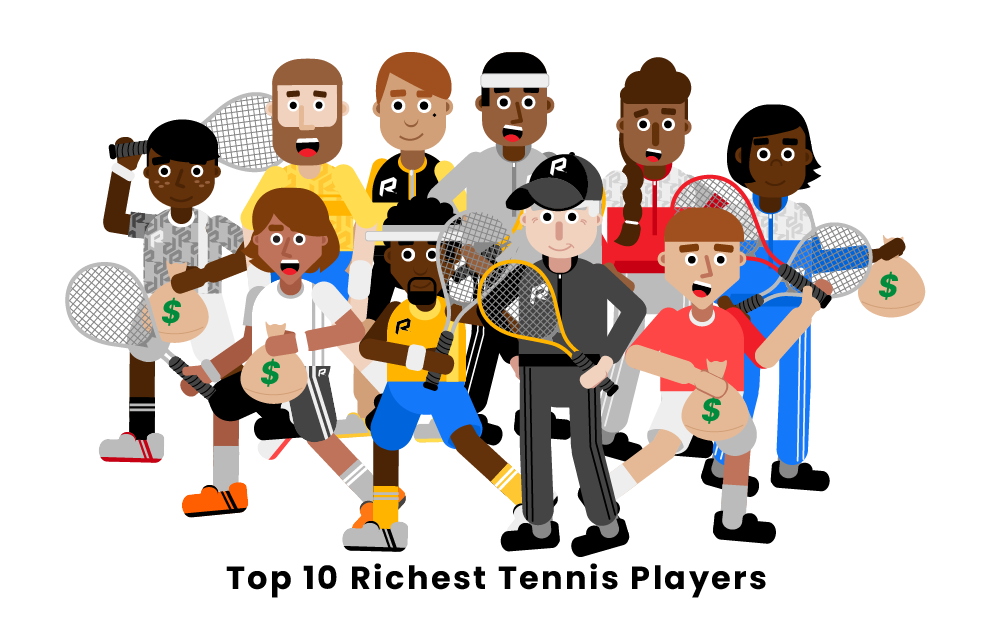 As one of the most popular sports worldwide, it should come as no surprise that tennis players at the professional level make a lot of money. Through prize money and endorsements, tennis players are able to bring in millions of dollars each year. Read on to learn more about the highest earners in tennis.

Who Are the Richest Tennis Players in the World?

Ion Tiriac is the richest person to play competitive tennis, and has a net worth of $1.2 billion. Tiriac retired from tennis in the 1970s after having a brief career playing singles matches, though mostly doubles. He played in every one of tennis’ Grand Slams at some point in his career. The way he made his money came after his retirement, when he founded Banca Tiriac in 1990. That led to Tiriac owning his own investment group, Tiriac Group, which did everything from managing athletes to dealing in real estate. Ion Tiriac is less of a rich tennis player and more of a tennis player who later got rich.

The winningest male tennis player in history, Roger Federer, has a net worth of over $550 million. With 20 Grand Slam titles, Federer has won his fair share of prize money. On top of that money, Federer is highly sought-after for endorsements. In 2020, Federer accumulated $100 million in endorsements, on top of $6 million in prize winnings and another $106.3 million in commissions. Federer's endorsements include the fashion brand Uniqlo, Mercedes Benz, and many more. All of this was enough to secure Federer the top spot on Forbes’ richest athlete list in 2020, the first time a tennis player had taken that spot.

There is no bigger name in tennis than Serena Williams, who has a net worth of over $250 million. Williams is the second-winningest tennis player of all time and perhaps the most dominant athlete in the sport’s history. For good reason, Williams is paid as such. Williams is the highest-earning female tennis player of all time. Aside from the huge prize money from winning 23 Grand Slam titles and countless other tournaments, Williams has quite a few endorsement deals. In 2020, Williams made $32 million in endorsements, despite only making $4 million in earnings due to having a relatively quiet year. For two decades, Williams has been a star, earning her place among the wealthiest tennis players.

Novak Djokovic has often been in the shadow of Roger Federer, and he is just behind him on this list with a net worth of over $220 million. The Serbian tennis player has won a total of 21 Grand Slam titles. While his competition, Federer and Rafael Nadal, are dominant on grass and clay, respectively, Djokovic is versatile, picking up wins on all different courts, but especially at the Australian Open. Djokovic’s winnings are huge: $12.6 million in 2020, and his endorsements only further amplify his wealth. All of this helped land Djokovic at Number 23 of the highest-paid athletes of 2020, the second tennis player on the list after Roger Federer.

Rafael (Rafa) Nadal is arguably the best left-handed tennis player ever, with a net worth of over $220 million. Nadal is a long-time champion, especially on the clay courts at the French Open. For his winning, Nadal has raked in over $100 million in prize money throughout his career. On top of his winnings, Nadal makes lots of money through endorsements, especially in his native Spain. In 2020, Nadal made $26 million on endorsements, enough to make him the 27th highest-paid athlete in the world.

Maria Sharapova is a talented Russian tennis player with a net worth of $180 million. Often in the shadows of Serena Williams, as almost all female tennis players have been for the last 20 years, Sharapova still managed to be a popular and successful tennis player in her own right. A few years ago, Sharapova got in trouble for using Meldonium, a banned substance, even though she was using it for a heart problem. Before that, Sharapova often found herself deep into tournaments, earning herself a good amount of prize money. Even more, Sharapova was widely considered a marketable personality, racking up plenty of endorsement deals from companies including Evian Water and Nike.

The second retired player on this list, Pete Sampras was a champion in his time, earning a net worth of $150 million. Throughout his career, Sampras made over $40 million in winnings alone. Sampras' career lasted 14 years, and he won 14 Grand Slams, ending with a US Open championship, where he was immensely popular. Sampras continued to earn outside of just his winnings, earning up to $100 million in sponsorships both during his playing career and afterward as a personality in tennis. Sampras has remained in the public eye since 2002, helping him to continue bringing in money.

Andre Agassi is a legendary retired tennis player with an approximate net worth of $145 million. Agassi, originally from Las Vegas, is best known for having won eight Grand Slam titles. In fact, his Grand Slam dominance was so great that he won each Grand Slam event at least once in his career. Outside of his success in Grand Slam events, Agassi also won an Olympic gold medal in 1996, in the men’s singles event. With such extensive success throughout his career, Agassi acquired lucrative endorsements from brands such as Kia Motors, American Express, Head, Nike, and more. His consistent dominance culminated in his induction into the International Tennis Hall of Fame in 2011.

Andy Murray is without a doubt the best tennis player to come out of Great Britain, with a net worth of approximately $100 million. Murray became even more popular when he won gold at the 2012 London Olympics. Murray is outside of the popularity and wealth of guys like Federer, Djokovic, and Nadal, but has in the past been in competition with those big-name tennis players. Murray has accumulated his fortune from his winnings and various sponsorships. Those sponsorships include Jaguar, Head, and Under Armour, all big brands that have paid handsomely for Murray’s time.

John McEnroe is a legendary tennis player from the 1970s and 1980s who holds a net worth of $100 million. He was ranked number one in the world in both singles and doubles at points throughout his career and retired with 77 singles tournament wins and 78 doubles tournament wins. McEnroe now plays on senior tennis tours and commentates for multiple television networks covering some of tennis’ biggest tournaments.

Venus Williams is an American professional tennis player with a net worth of approximately $95 million. She is the older sister of Serena Williams, who is widely regarded as the best female tennis player ever. She rose to fame at a young age and was pursued by sponsors shortly after becoming the number one female tennis player in the world in February of 2002. She earned the number one rank by winning four grand slam tournaments in a two-year span. While she was overtaken by her sister shortly thereafter, she still was able to make a significant amount of money from winning tournaments. 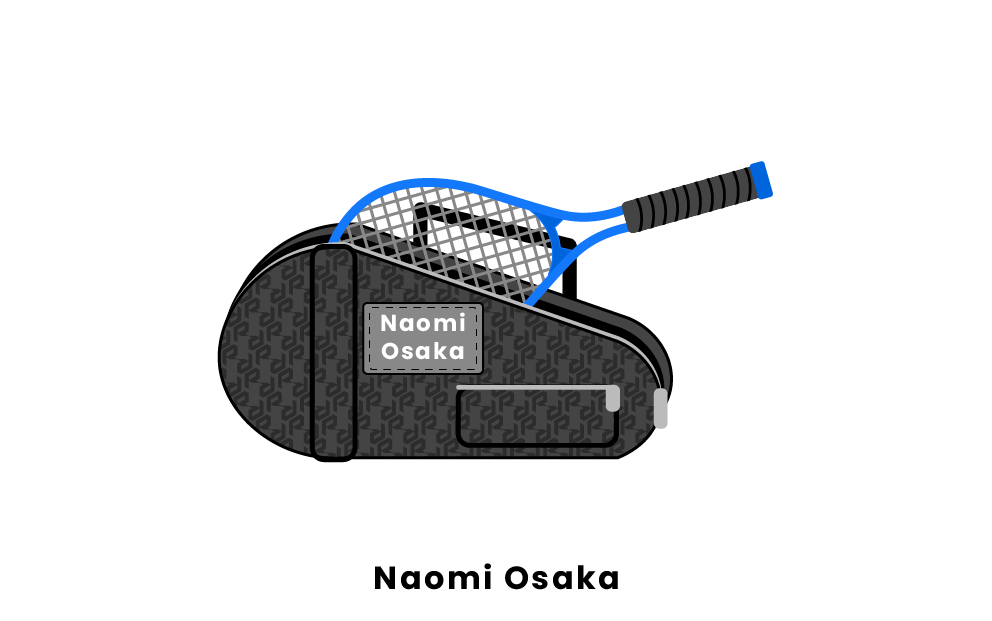 At only 22 years old, Naomi Osaka is by far the youngest tennis player on this list, with a net worth of around $45 million. Osaka burst on to the tennis scene a few years ago and made herself known by beating Serena Williams on her home turf at the US Open. Osaka’s rise to success, paired with her marketability, quickly earned her quite a bit of money. In 2020, Osaka took William’s spot as the highest-earning female athlete in the world in a single year. With sponsorships quickly coming in from Nike, Mastercard, and other big names, Osaka brought in over $34 million in endorsements in 2020. It would be no surprise to see Naomi Osaka climb the list of richest tennis players in years to come, as most of her career is still ahead of her.

He might not be well known outside of the tennis community, but with a net worth of over $24 million, Kei Nishikori has earned his place as one of the wealthiest players in the game. In 2020, Nishikori ranked as the 40th-most valuable athlete in the world. He made just over a million dollars in prize money. Most of his money was made through endorsements. Nishikori raked in about $30 million in endorsements from companies such as Jaguar, Asahi, and other mainly Japanese companies. Nishikori was one of the faces of the Tokyo Olympics, only boosting his marketability.

Who’s the richest active tennis player in the world?

The richest active tennis player in the world is Roger Federer, with a net worth of over $550 million. Federer is probably the biggest name in tennis, making him tons of prize money as well as even more on endorsements. Federer has endorsements from Uniqlo, Rolex, Mercedes-Benz, Wilson, and many more. The Swiss player also has won the most Grand Slams out of any male player in tennis. All that has accumulated to make Federer the richest tennis player in the world today.

How do tennis players make their money?

Tennis players make their money from a variety of places, mainly prize money and endorsement deals. The most obvious might be prize money. Every tournament has money laid out depending on what position you finish in throughout the tournament. The winner obviously gets the biggest check, but other players get paid too. The second common spot is endorsements. Players will be paid to only wear one type of shoe or to use one brand's racket. This obviously depends on player popularity and varies wildly.

Who is the richest tennis player of all time?

The richest tennis player of all time is Ion Tiriac, who has a reported net worth of over $1.2 billion. While he is no longer playing tennis, and most of his fortune came after his career in the sport, Tiriac is the richest person ever to play tennis professionally. Earning the nickname “Count Dracula” because he was born in Transylvania, Romania, Tiriac was a successful doubles player in tennis, winning the 1970 French Open with partner ​Ilie Năstase and earning a few million from prize money during his tennis career. However, the majority of his wealth came from his heavy involvement in his business ventures following his retirement from professional tennis. He founded Tiriac Bank in 1990 and his own investment group, Tiriac Group, shortly after.