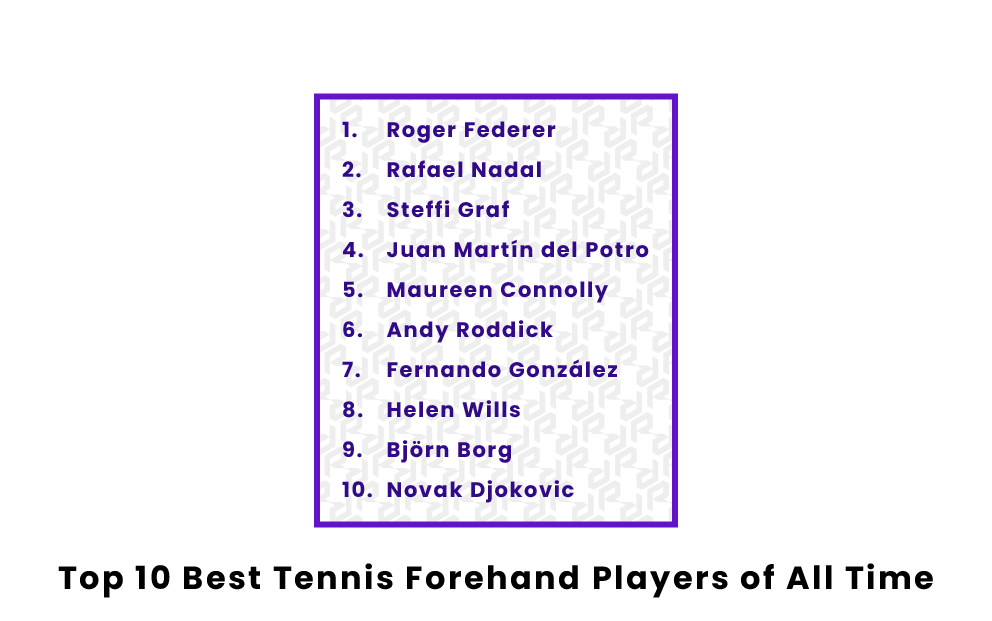 To be a professional tennis player, and especially to find success against some of the greatest players of all time, one must have a strong forehand. A forehand hit is when a player uses their dominant hand to return the ball when it comes to that side of their body. While most professional tennis players have powerful forehands, these ten players are known for their especially-dominant forehands.

Which tennis players have the best forehand of all time?

Roger Federer is one of the names in tennis that will never be forgotten. He is a household name due to his consistent and prolonged success on the world circuit. Throughout his career, Federer has won 20 Grand Slam tournaments. Eight of those came at the All England Club during the Wimbledon tournament. With $130 million in total earnings, Roger Federer ranks third in total winnings during his career. Known throughout his career as being spectacularly well-rounded in all aspects of his game, Federer has been known especially for his strong forehand game. In this aspect of his game, he demonstrates strength, patience, and brilliant strategy. Some of his most famous moments on the court have come from his cunning forehand drop shot, which has been known to leave his opponents completely flat-footed.

Rafael Nadal is one of the most famous tennis players of all time. His success in the sport has been practically unrivaled by his peers. He has won 22 Grand Slams, 14 of which were in the French Open. Nobody has won the French Open more than he has. He is also 2nd all-time in total career earnings with just north of $131 million. Nadal’s success can be attributed to many different factors. He has a strong backhand and a reliable serve, but his forehand truly sets him apart from anyone else. His forehand is noted as being exceptionally accurate, extremely strong, and very well-spun. These three elements make for a forehand that’s extremely difficult to counter. Nadal also has perhaps the longest reach on his forehand, which is owed to his speed and precise footwork. When it comes to forehand play, Rafael Nadal is nearly unmatched.

As one of the most successful tennis players throughout the late eighties up until the early 2000s, Steffi Graf reached tennis superstardom thanks to her complete and total dominance on the court. All told, Graf won the Australian Open four times, the French Open six times, Wimbledon seven times, and the US Open five times. Most pro tennis players have certain events where they excel more than others, but that’s not the case with Graf. She demonstrated remarkable consistency on her way to 22 Grand Slam titles. Perhaps most remarkably, she won all four Grand Slams in the 1988 calendar year - one of the rarest feats in tennis. Much of this success was thanks to her legendary forehand. Her forehand shot had explosive power that most of her opponents couldn’t match. She didn’t put much spin on the ball, which makes for a more difficult shot, but she compensated with her outstanding accuracy.

Juan Martín del Potro stands apart on this list for a few different reasons. Unlike the Federers or Nadals of the tennis world, del Potro doesn’t have double-digit Grand Slam wins. In fact, he only has one. But that one Grand Slam title involved defeating both Federer and Nadal, and he accomplished that by using a forehand that took the entire tennis world by surprise. Del Potro’s forehand is unique in that he hardly puts any spin on the ball. Instead, he slaps the ball flat with his racket, which creates much more speed but demands incredible precision. That’s why del Potro’s forehand has captured the hearts and minds of the tennis world - his incredible accuracy. When his forehand is working, it’s virtually impossible to defend against. It’s simply too fast. This speed and precision were all on display during the 2009 US Open, which cemented his legacy as one of the greatest forehand players of all time.

Like Steffi Graf, Maureen Connolly was one of the few players in the history of tennis to win all four Grand Slam tournaments in a single calendar year - commonly known as the Calendar Grand Slam. In addition to those four wins, Connolly secured an additional five Grand Slam wins throughout her career. Her best tournaments were Wimbledon and the US Open, both of which she won three times. While Connolly came to be known for her dazzling one-handed backhand, she had a forehand equally ahead of its time. Like Steffi Graf, Maureen Connolly relied on impeccable footwork to maximize her forehand. She’s noted for having an incredibly detailed game; her forehand was crucial to this. If it weren’t for this dominant forehand, it likely would have been impossible for her to go on such an incredible run of victories as she did in 1953.

Andy Roddick found his way towards the top of the tennis hierarchy in the early 2000s. This culminated in a US Open win in 2003, along with Wimbledon finals appearances in 2004, 2005, and another in 2009. In November of 2003, he even reached the number one spot in the ATP world rankings. Throughout his singles career, Roddick won almost 75% of all matches he played, going 612-213 all time. While many people note how Roddick was one of the best servers of all time, some forget about his powerful forehand that helped take him to the top of the sport. He was especially dominant when using this forehand after his serve. After a strong serve, his opponent would often be forced to make a weak, desperate return, which made it easy for Roddick to bury them with his strong forehand. His serve and forehand combination was tough to crack, and few ever did.

Despite never winning a Grand Slam tournament, Fernando González is still known for his spectacular successes on tennis’ world stage, thanks to his incredible forehand. During his career, González reached the finals in the Australian Open in 2007 and was a quarterfinalist four other times in Grand Slam tournaments. He, at one point, reached the number five spot in the ATP world rankings and garnered more than $8 million in prize money. He even beat other players famous for their forehands, such as Rafael Nadal and Roger Federer. He was even given the nickname “Mano de Piedra,” which translates to “Hand of Stone.” His forehand was nearly unbeatable in how he summoned such power and accuracy. This forehand allowed him to rise through the ranks in professional tennis and make a name for himself on the professional circuit.

One of the early stars of tennis, Helen Wills, dominated the women’s professional tennis circuit throughout the late 1920s through the late 1930s. She won Wimbledon a whopping eight times and the US Open seven times. This amounted to 19 Grand Slam wins, which is especially remarkable considering the Australian Open wasn’t even around at the time. Her all time win/loss record is a remarkable 398-35, winning 92% of all tennis matches she played in. Much of this success was due to a forehand technique well ahead of its time. She played her greatest tennis from the baseline, relying on a forehand that was strong and fast for its time. Like some of the other greats on this list, she didn’t put much spin on the ball. This type of forehand is harder to make, much riskier, but with a much higher reward in that it’s very difficult to return.

Björn Borg is still one of the most famous names in tennis, thanks to his dazzling success in the 1970s. Throughout his career, he won a total of 11 Grand Slam titles. Six of these came from the French Open, and the other five from Wimbledon. Borg was so dominant that all five of his Wimbledon wins came in consecutive years. Between 1976 and 1980, Borg was simply untouchable at the All England Club. He was also voted ATP Player of the Year during those same years. Much of this success is likely owed to his strong and reliable forehand. Most of the top players at the time implemented a flat forehand without much spin, but Borg instead opted for a forehand with heavy topspin. This increased the reliability of the stroke and, combined with his strength and power, made Borg’s forehand a force to be reckoned with.

Being one of the most prolific tennis players of all time, it’s hard not to be amazed by Novak Djokovic’s astounding career achievements. He has a total of 21 Grand Slam wins, nine of which are from the Australian Open. He’s also won seven Wimbledon titles. Djokovic is the all-time leader in career earnings from tennis, with a jaw-dropping $158 million of prize money to his name. He’s spent the longest time atop the ATP world rankings and has won over 83% of his matches. Undoubtedly, Djokovic will go down as one of the greatest in tennis history. While he’s known as being one of the most well-rounded players of all time, Djokovic’s forehand is known to be underrated. As his career progressed, so did his forehand. It’s become more accurate, powerful, and most of all, consistent. His forehand is tremendously reliable and easily one of the best weapons in his arsenal.

Which men’s tennis player has the best forehand?

Roger Federer has the best forehand out of all male professional tennis players. His forehand is very strong, incredibly precise, and very reliable. His mechanics on his forehand leave audiences and players alike completely in awe. Thanks to his nearly-perfect forehand, Federer has been able to make a long and fruitful career in tennis. It will be difficult for any player in the future to match the level of forehand greatness that Federer has achieved during his years in the sport.

Which women’s tennis player has the best forehand?

With 22 Grand Slam tournament wins, Steffi Graff has used her spectacular forehand to reach the pinnacle of tennis success. Her forehand is noted as being one of the most accurate of all time, which was necessary, seeing as she didn’t put much topspin on the ball. A flat forehand such as Graff’s is more difficult to put inside the lines but, at the same time, can be much faster. Graff used this type of flat forehand to perfection.

What is a forehand in tennis?