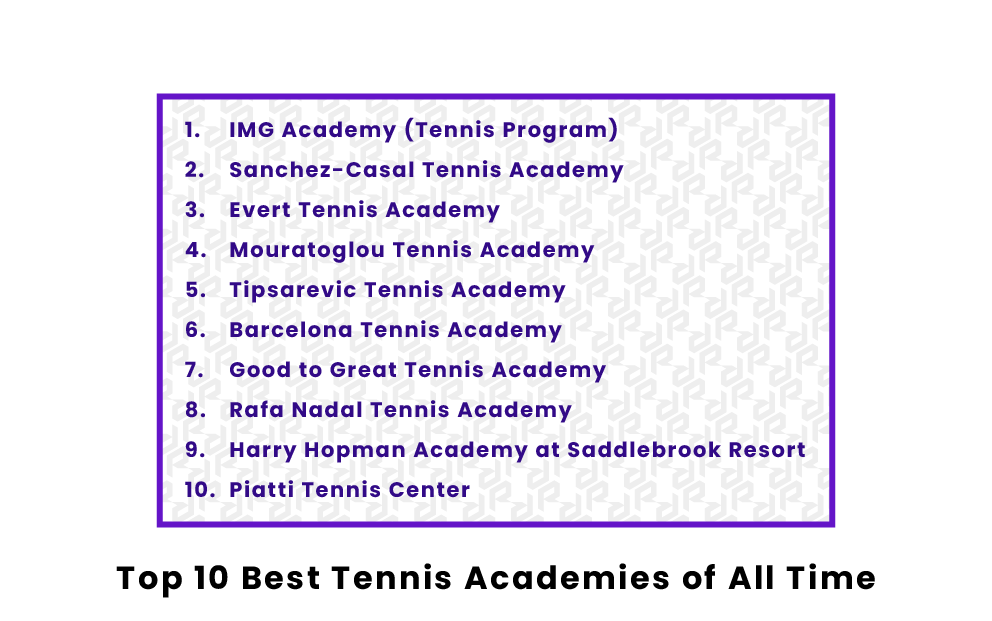 Tennis, like all racket disciplines, is a sport in constant evolution, where only the best and most versatile athletes reach the highest level. Legends like Andre Agassi and Novak Djokovic have achieved greatness thanks to the innovative training methods of academies like IMG and Evert. Let’s take a look at the ten best tennis academies in the world.

What are the best tennis academies of all time?

In over forty years of history, the Nick Bollettieri Tennis Academy, now IMG Academy, has established itself as the world’s leading facility for tennis training.

Back in 1978, when Nick Bollettieri, a former amateur tennis player, decided to open his academy, there were not many sports academies that specialized in tennis. After working in Puerto Rico, Bollettieri decided to create a center where players would be able to play tennis every day while also studying. For this reason, Bollettieri is considered the pioneer in the tennis academy industry, having developed a tennis training model and environment that soon led to the creation of similar centers around the world.

After almost ten years of developing talent, the Nick Bollettieri Tennis Academy was sold to International Management Group (IMG), which expanded the center, creating one of the biggest sports complexes in the world. The academy, located in Bradenton, Florida, has become a powerhouse that constantly produces collegiate and professional talents.

Alongside Florida, the South of Spain is home to multiple top ten tennis academies in the world. Founded in 1988, the Sanchez-Casal Tennis Academy has quickly become one of the most popular tennis training centers in the world thanks to the training style developed by former ATP number seven Emilio Sanchez.

When Emilio Sanchez and Sergio Casal joined forces to turn their vision into reality, the goal was to create a center where aspiring tennis professionals could have the best training tools available. Now, after more than thirty years of great successes, the focus is not just on turning prospects into professionals, as education has gained a bigger role in the academy's philosophy.

The Sanchez-Casal training philosophy has gained great popularity around the world. This has allowed the two Spanish entrepreneurs to open branches of the Barcelona-based academy in Atlanta, Georgia; Naples, Florida; and Nanjing, China.

Less than an hour away from Miami Beach, Evert Academy in Boca Raton, Florida, closes out the podium of the best tennis academies in the world.

Opened in 1996 by the former pro player Chris Evert and her brother John, the academy is located in a great space adjacent to Boca Prep International School, one of the highest-ranked private schools in Florida. Students of the academy have the option to attend Boca Prep, as education plays a fundamental role at Evert Academy.

The favorable weather conditions allow students at Evert to practice outdoors almost all year long. Their average day consists of five hours of training divided into two sessions. The first one starts at 7.00 am, and it is followed by one hour of conditioning before starting the school day. After classes, students train for two more hours to complete the famous five hour cycle of tennis practice.

The Mouratoglou Tennis Academy fully reflects Patrick Mouratoglou`s vision of creating a training facility that could cater to the specific needs of each athlete. There, every single prospect receives a personalized training regime while also having the opportunity to experiment with other disciplines in their free time, as the academy offers training for many other sports.

Since the academy is located in France, students can study in a local school affiliated with the program. However, the academy gives great value to the international aspect, as athletes can attend an English school on campus.

After a long career in the ATP circuit, Janko Tipsarevic decided to open his own tennis academy to give local talents the opportunity to train in a modern facility. In less than ten years of activity, the Tipsarevic Tennis Academy has become the place to be for the local prospects in a region where all-time greats like Novak Djokovic and Ana Ivanovic had struggled to find training facilities in great conditions.

Tipsarevic’s goal is to focus on local talents and increase participation in the sport in Serbia, taking advantage of the rising popularity of the sport thanks to his and Novak Djokovic’s successes. Therefore, the academy offers both “High Performance” training options and courts to use for recreational use.

An experienced team of local trainers offers constant assistance to players at the facility, as no aspect of the life of these young players can be overlooked according to Tipsarevic’s philosophy.

Only two blocks away from Platja de Castelldefels, one of the main beaches in Barcelona, the Barcelona Tennis Academy is considered the best facility for clay court training.

The Barcelona Tennis Academy boasts one of the newest training complexes in Europe, as the facilities in Castelldefels were inaugurated only in 2015. The academy is run by Raphael Maurer, a Swiss tennis coach with Grand Slam experience. There, the staff focuses on bringing in extremely young and raw prospects from all over the world to train and develop them through their innovative training methods.

Similar to the Mouratoglou Tennis Academy, BTA has over ten padel courts for training and recreational use due to the popularity of the sport in Spain. Tennis players that train in the facility can enjoy their free time practicing other sports while also being close to one of the main beaches in the country.

Located thirteen kilometers north of Stockholm, the Good to Great Tennis Academy offers some of the most intensive training programs in the world. The academy is run by former pro players Magnus Norman, Nicklas Kulti, and Mikael Tillström, who have created the C.A.R.E. (Concentration, Attitude, Respect, Energy) philosophy, which players have to abide by on and off the court.

Attention to detail is key at the Good to Great Academy, where trainers and coaches are asked to turn players into well-rounded individuals and not just pro tennis stars. While the main focus remains on tennis, the academy allows players to follow online schooling from their respective countries and provides them with academic assistance.

Due to the harsh winter season in Sweden, most of the courts in the facility are indoor, which makes the Good to Great Tennis Academy one of the best complexes in all of Europe for hard surface courts.

Due to its lack of history, the Rafa Nadal Tennis Academy has not reached the top of the rankings yet. However, the academy is among the very best in the world in terms of the quality of the facilities. The complex has twenty-six hard surface courts and many clay courts, where athletes can learn the secrets that made Rafael Nadal the “King of Clay.” The academy also includes multiple soccer fields, as Rafael Nadal is a great fan of the sport.

Like many other academies in Europe, English is the main language in day-to-day activities. In order to give athletes holistic academic preparation, an international school was built in the complex to allow players to study and learn English while training every day.

The Harry Hopman Academy at Saddlebrook Resort has a similar story to the Nick Bollettieri Tennis Academy at IMG. Like the NBTA, this academy, which is located in Tampa, Florida, was founded by the Australian Harry Hopman, who moved to the United States to coach after a great professional career.

The complex, which includes forty-three courts with all four Grand Slam surfaces, was sold to the Saddlebrook Resort in 1986 and is now part of one of the largest country clubs in Southern Florida. There, young prospects from all over the world enroll every year in one of the premier tennis programs in the United States.

Junior athletes at the academy follow the traditional five-hour training schedule, starting before 8.00 am and finishing at 3.00 pm. Pro tennis players such as John Isner and Alexander Zverev have come out of the program and occasionally train at the facility.

While the facility does not include nearly as many courts as most top tennis academies in the world, the Piatti Tennis Center in Bordighera, Italy, has been the training ground for many top players for over three decades.

Located next to the border with France and only twenty minutes from Monaco, the Piatti Training Center can count on four hard courts, two gyms, recovery rooms and even a mental gym. Unlike other academies, this center does not include a boarding school, as the main focus is on the physical and mental preparation of the players.

The small size of the campus is compensated by a training method that has been producing talents since 1986. Young athletes that are enrolled in the academy can also receive constant motivation from watching professional players’ training sessions, as many top ATP players, including Novak Djokovic, Stanislav Wavrinka, and Jannik Sinner, practice at the Piatti Tennis Center.

What is the best tennis academy in the world?

The IMG Academy (Tennis Program), formerly known as Nick Bollettieri Tennis Academy, is acknowledged as the best tennis academy in the world. Nick Bollettieri’s experience and training philosophy, coupled with IMG’s facilities, among the biggest in the world, have made this the best center for talent development. Similar to most academies, IMG also offers private and group lessons for amateurs, who have the opportunity to stay on campus and experience the daily life of an IMG athlete.

Pages Related to Top 10 Best Tennis Academies of All Time