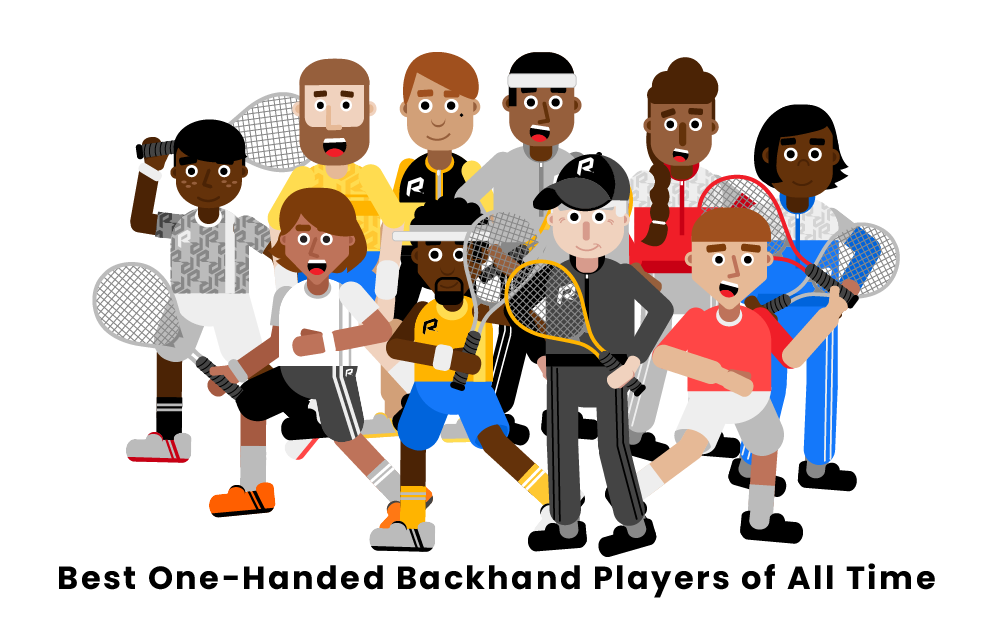 In tennis, a backhand shot is a shot where the back of the player's hand is facing their opponent, and they hit the shot across their body. Some players hit this shot one-handed, while others keep both hands on the racket. Both methods are popular amongst tennis players, and frequently players use both methods throughout their careers. Most prefer one over the other, however, and the remainder of this piece will focus on the accomplishments of some of the best players who preferred the one-handed backhand.

Which tennis players were the best all time to use the one-handed backhand?

The first woman on this list, and arguably the greatest female player ever, Margaret Court, checks in at number two. Margaret began playing in Grand Slams in 1960 at the age of 18 and immediately established herself as a dominant player, winning her native Australian Open in that first year. She would eventually win 11 Australian Opens (1960-1966, 1969-1971, 1973), five French Opens (1962, 1964, 1969, 1970, 1973), five US Opens (1962, 1965, 1969, 1970, 1973), and three Wimbledons (1963, 1965, 1970). Her twenty-four Grand Slams are the most of any player, male or female, of all time. With all of her victories, Margaret is one of just ten women all-time to win all four Grand Slams, and in 1970 she won what is known as the Calendar Slam. In other words, she won all four Grand Slams in the same year, and only four other players in history, male or female, have done the same. While most players were more comfortable with their forehand, Court could attack with either her forehand or backhand, and that is partially why she was so dominant in her time.

The second male player on this list, Pete Sampras, takes the number four spot. When he was just sixteen years old, Pete turned professional in 1988, and by the end of the year, he was already in the top 100 in the world. Two years later, he won the US Open for the first Grand Slam of his career. Pete would go on to win his native US Open five times (1990, 1993, 1995, 1996, 2002), Wimbledon seven times (1993, 1994, 1995, 1997, 1998, 1999, 2000), and the Australian Open two times (1994 and 1997). Unfortunately for Sampras, he never won the French Open and never even made the final, so he does not have a career Grand Slam. Nonetheless, his fourteen career Grand Slams are the fourth most of any man in tennis history. Interestingly enough, Sampras was initially primarily a two-handed backhand player, but he switched to a one-handed shot when he was fourteen years old, and he has said that that was a major reason for his success since he felt his two-handed backhand was not improving.

One of Steffi Graf’s main rivals, Martina Navratilova, ranks number five on this list. Although Martina was a few years older than Graf, the two faced off quite a bit throughout their careers. As for Martina specifically, she turned pro in 1975 at the age of eighteen and won her first Wimbledon three years later in 1978. She went on to win Wimbledon a record nine times (1978, 1979, 1982-1987, 1990), the most of any player, male or female. She also won four US Opens (1983, 1984, 1986, 1987), three Australian Opens (1981, 1983, 1985), and two French Opens (1982 and 1984). Like the two previously mentioned females on this list, she is one of the ten women with the career Grand Slam. Her eighteen total Grand Slams are tied with Chris Evert for the fifth most of any woman all-time. Martina has talked over the years about how difficult it is to hit her one-handed backhand, saying it practically takes a genius to do so.

An Australian player like Margaret Court, Rod Laver takes the number six spot on this list. Like Margaret, Rod won his first Grand Slam in 1960 at the Australian Open, and the two would go on to dominate tennis in the 60s together. Laver won the Australian Open on three occasions (1960, 1962, 1969), Wimbledon four times (1961, 1962, 1968, 1969), the US Open twice (1962 and 1969), and the French Open twice (1962 and 1969). Lavor’s eleven Grand Slam titles are impressive, but even more impressive is the fact that eight of them came in two years, 1962 and 1969. In other words, he won the Calendar Slam two times, the only player ever, male or female, to do so. On the overall list, his eleven Grand Slams are tied for the sixth most in history for male players. As for his backhand, it was one of the most powerful in his day, and it created lots of problems for his opponents over the years.

Roy Emerson, the second straight Australian, comes in at number seven on this list. Roy played around the same time as Court did, although he turned pro at a much older age than most of the other players on this list, doing so in 1968 when he was 32. This was mainly because most of the better players did not turn professional in his day, as the Grand Slam events were for amateurs only. Regardless of whether he was an amateur or pro, Emerson won twelve Grand Slam events during his outstanding career. Thus, players like Court and Laver did not immediately become professionals either. Emerson’s best event was the Australian Open, which he won six times in a seven-year span (1961, 1963-1967). He also won each of the other Grand Slams twice, winning the US Open in 1961 and 1964, the French Open in 1963 and 1967, and Wimbledon in 1964 and 1965. Thus, Emerson is on the same list as Roger Federer as one of eight men in history to win all four Grand Slam events. In his retirement days, Emerson spent time teaching others the game of tennis and sharing his skills, including his famous slice backhand.

The last woman to make this list, Billie Jean King, takes the number eight spot. Billie played in her first major in 1959 at the US Open when she was only sixteen, and seven years later, in 1966, she won her first at Wimbledon. Overall, in her career, she won twelve Grand Slams: six at Wimbledon (1966-1968, 1972, 1973, 1975), four US Opens (1967, 1971, 1972, 1974), the 1972 French Open, and the 1968 Australian Open. When she won the French Open in 1972, she became one of the ten women throughout tennis history to win all four Grand Slam events. She also is known by many outside the tennis world for her work and activism for women’s rights. Additionally, one of Billie’s post-playing adventures has been designing her “eye coach” designed to help players improve their games. Part of the eye coach involves helping players with their backhand, including Billie’s one-handed topspin shot.

Like Martina Navratilova, Ivan Lendl is from Czechoslovakia, and he takes the second to last spot on this list. In 1984, he won his first Grand Slam at the French Open when he was 24 years old. Between 1984 and 1990, Lendl won eight Grand Slam events: three at the French Open (1984, 1986, 1987), three in a row at the US Open (1985-1987), and back-to-back at the Australian Open (1989 and 1990). He made the Wimbledon final in 1986 and 1987 but unfortunately, was unable to win either time. Thus, he does not have the career Grand Slam to his name. Despite this fact, his eight Grand Slams wins rank him in the top ten all-time, specifically tied for ninth with a few other players. Initially in his career, Lendl used a regular slice backhand, but he eventually learned the one-handed topspin backhand shot, and he credits that shot with helping his career take off.

The oldest player on this list, Bill Tilden, takes the final spot. Bill began playing in the top tennis events in 1912 at the age of nineteen, and he continued to do so until 1931. During those nineteen years, Tilden won the US Open seven times, including six in a row from 1920-1926, along with the 1929 tournament. His other three Grand Slams came on the other side of the Atlantic at Wimbledon, which he won in 1920, 1921, and 1930. He was also the runner-up at the 1927 and 1930 French Opens, although he never won the event. Like a few others that have already been mentioned, Tilden’s backhand was not as strong when he first started playing, but once he learned the one-handed topspin shot, he began having a lot more success on the court. In 1950, he was voted the greatest tennis player of the first half of the 20th century by the Associated Press.

Who is the best men’s tennis player to use the One-Handed backhand?

The best men’s tennis player to use the one-handed backhand shot is Roger Federer. The twenty Grand Slams Federer won are by far the most of any male player who used the shot, six more than Pete Sampras. Federer’s backhand shot is one of both quality and beauty, and many say it allows him to hit a winner with it from anywhere on the tennis court, regardless of the surface.

Who was the best women’s tennis player to use the one-handed backhand?

The greatest women’s tennis player of all time to use the one-handed backhand is Margaret Court. Court’s twenty-four Grand Slams are the most all-time of any player, male or female. Court’s backhand was just as deadly as her forehand, an usual fact for a tennis player, and it is part of the reason why she was so successful throughout her career.

What is a one-handed backhand in tennis?

A one-handed backhand shot in tennis is a shot that players use when they hit their backhand with only one hand on the racket rather than two. Whether or not players use one hand or two is completely up to personal preference, and there are plenty of players on both the male and female tour who use both. Players will sometimes be able to hit both types of shots, but almost all of them prefer one or the other.