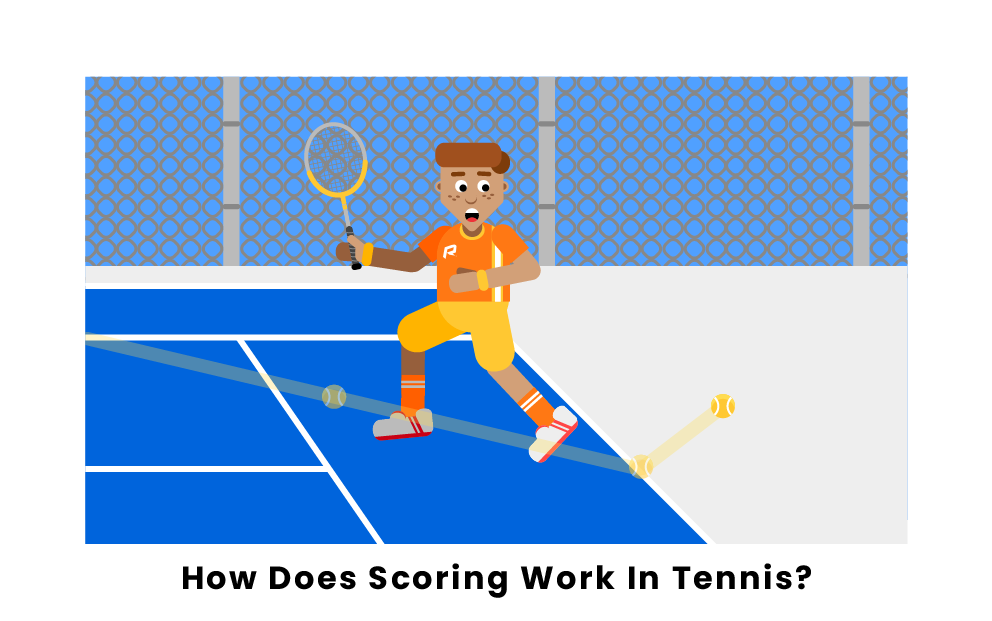 In tennis, there are various ways to score points against your opponent. A point is scored after you hit the ball and it bounces a second time after having bounced once somewhere within the area of play. The inbounds area for doubles is wider than for singles, but the scoring works the same. When serving the ball you have two attempts, but if you fail both serves, the opponent gets a point without even having to play.

Tennis scoring can seem very difficult, but once understood, it becomes second nature. Tennis is played in singles or doubles and the scoring is the same for whichever one you choose. Every game starts at 0-0, but players do not call this "zero-zero." In tennis, they say "love" to represent a score of zero, so a 0-0 score would be called "love-love". There are four points that must be won to win a game and the notation is:

The rules of winning a game are simple, but there are also some minute intricacies that determine the outcome.

There are four points needed to win a game. The score always starts at 0-0 or love-love. Once the first point is scored, the winning player has a score of 15, making the score 15-love. Let's say that they also win the second point. Now the score would read 30-love. If they win the third point, making the score 40-love. If the opponent makes a comeback and scores 3 consecutive points, the score is 40-40, or "Deuce." At this point in the game, either opponent must win by two consecutive points to win the game. If whoever is serving wins the point, it is called "Ad-In," but they must win the next point to win the game. If the receiving player or team wins the point, it is called "Ad-Out." The "Ad" stands for advantage. Games can be stuck in the loop of swapping points for a long time in some cases. Once a player wins two consecutive points, they win the game.

The next level for winning a match is to win a set. To win a set, you must win six games. Because they need to keep score of the games won, athletes use the term "set score." If a player wins two games and their opponent wins one, the set score is 2-1 in their favor and their opponent would need to win four more games to win the set. Just like the game score, you must win the set score by a difference of two. A set score of 6-5 would not finish the set unless the player with six wins the next game, or if the opponent wins three games in a row to make the set score 8-6.

What does "love-love" mean?

Love, as stated earlier is the representation of the score "zero" in tennis. Many are confused as to the origins of this odd name and rightfully so. The origins are very unclear, but the most prominent has to do with eggs! That's right, eggs. This theory came from France and because zero "0" resembles an egg, it would have been known as "l'oeuf", which is the french term for an egg at the time. Many believe that the term l'oeuf over the years turned into love over time.

Nobody has a solid answer to the origins of the 15, 30, 40 scoring system, but there are some theories that provide a reasonable explanation to this question. One of the most credible theories attributes the scoring system to medieval France. The theory states that they used a clock on the court to keep track of the points and would move the hand to the 15-minute mark, 30-minute mark, 45-minute mark, and the 60-minute mark, thus completing one rotation on the clock.

Another prominent theory is that because you need to win by two in a deuce, when you score one point the clock moves to 50, and then 60 if the next point is also scored by you, effectively finishing the game. But if you score a point and your opponent scores a point your 50 becomes 40 again and both players are back tied at deuce.

Is there a difference between tennis singles and doubles scoring?

While there is no difference between singles and doubles when it comes to scoring, there are certain aspects of the game that change depending on how many people you are playing with. For starters, the playing field is larger when playing doubles. A traditional tennis court has two lines, a singles sideline and a doubles line. When playing doubles, the play area is larger and any ball that lands within the doubles line (a little further out) is considered in. For singles, the singles sideline is considered the edge of the playing field. Additionally, serving in doubles, it is more common to see the server serving further from the center mark and in singles closer to the center mark.

Who keeps score in tennis?

When playing singles and doubles in a relaxed environment, the players keep the score and they also call their own penalties. For tournaments at higher levels, there is a scorekeeper located near the net on one side that keeps track of score and penalties as well. This is not always the case, but this is usually what will be seen at a tennis tournament at higher levels.