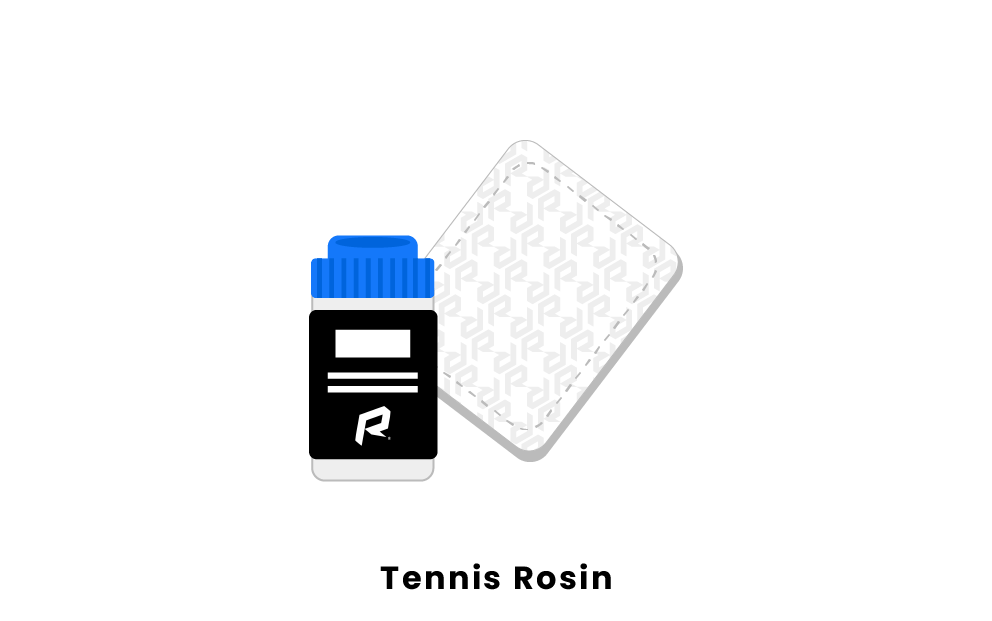 When tennis is played outdoors in the heat, there is one thing that is almost impossible to avoid: sweating. Sweat can form and drip from the body, making it difficult to grip a tennis racket. A towel or sweatband is a partial solution, but tennis rosin will help make gripping the tennis racket a lot easier.

What is tennis rosin used for?

Tennis is a very fast-paced sport with quick lateral movements and the constant swinging of a racket. Sweating is inevitable when playing a long tennis match. Tennis players do not wear gloves when playing because the rackets come with a synthetic leather grip. This makes the racket easy and comfortable to hold but does not reduce the chance of it being flung out of a player’s hand due to sweaty palms. Rosin is used in many different sports, like baseball, rock climbing, and tennis. In tennis, it is used to help reduce moisture that forms on the hand in order to ensure a firm grip on the racket. Rosin comes in different forms, such as in a bag, in the form of liquid, and as a powder. Tennis players apply the rosin to their hands prior to and during the match when their hands get sweaty and begin to form moisture. The rosin will reduce this moisture and make it easier to swing hard with no fear of the racket slipping out of their hand.

When looking for tennis rosin, you'll want to consider the following:

What are you looking for in tennis rosin?

Commonly seen on a pitching mound, a rosin bag is a great way to reduce the moisture on a tennis player’s hands as well. It looks like a small white pillow, and when it is picked up, the powder will exit the bag and provide relief for sweaty hands. Players often put a rosin bag on the bench during play and apply it during stoppages.

Like a rosin bag, rosin liquid is designed to eliminate moisture formed during a tennis match. This comes in a container and in the form of a liquid rather than a powder. Although it is a liquid, once applied and rubbed into the hands it will convert into a powder.

Very similar to the rosin bag, the rosin powder is simply a powder that reduces sweating. The major difference is that this type comes in a container, and it must be poured onto the hands. Rather than just picking up a bag to apply the rosin, this must be poured out. This form of rosin is very portable and easy to store without any mess.

There are a lot of grip and racket companies that also produce rosin materials. Of these brands, Gamma, Tourna, and Vulcan are some of the best companies to buy tennis rosin from.

Gamma is a large tennis and racket sports store that sells things like grips, ball machines, rackets, and rosin bags. Gamma has a rosin bag to go along with all of the other gear they sell. It is a white bag with one ounce of rosin enclosed in the bag.

Tourna is a tennis accessory website that sells string machines, ball pick-up machines, and many different types of rosin. Tourna sells rosin in three different options: a bag, liquid, and powder. Regardless of a tennis player’s rosin preference, Tourna has rosin to fit every player’s needs.

Vulcan is a sports company that primarily sells gear for pickleball, tennis, softball, and baseball. Along with countless types of grips, paddles, and apparel that they make for these four sports, they also make a rosin bag. The rosin bag is white and has a large “V” on it, which is the logo for Vulcan.

How much does tennis rosin cost?

Tennis rosin is generally inexpensive and should be something that all tennis players carry in their bags. Most rosin ranges from about $5-$10 depending on the company that it's purchased from. The bags tend to be on the lower end of the price range. Since tennis rosin is inexpensive, newer tennis players may even want to purchase different types to see which type of rosin is their favorite. Carrying a bag and some powder can guarantee that rosin will never run out, and it prevents the user from having to make a choice between the two.

Is tennis rosin a good substitute for grips?

Tennis rosin is not a substitute for grips. Grips make the racket comfortable to hold and swing while also adding additional grip. Grips also prevent the racket from being painful to hold during play. Rosin, on the other hand, reduces moisture that can form on the hands during a match. When applied to the hands, rosin will reduce the sweat and help the hands dry fast. Rosin and racket grips play two different roles in ensuring comfort while on the court.

What are the benefits of tennis rosin?

The main benefit of tennis rosin is relief from sweat during action. When a player’s hands become sweaty during gameplay, it makes it more difficult to hold onto the racket. The use of either a rosin bag, liquid rosin, or rosin powder will provide instant relief from sweaty hands during play. Once applied, the hands will become dry and players can swing their rackets with confidence, knowing that the racket will stay firmly in their hands.