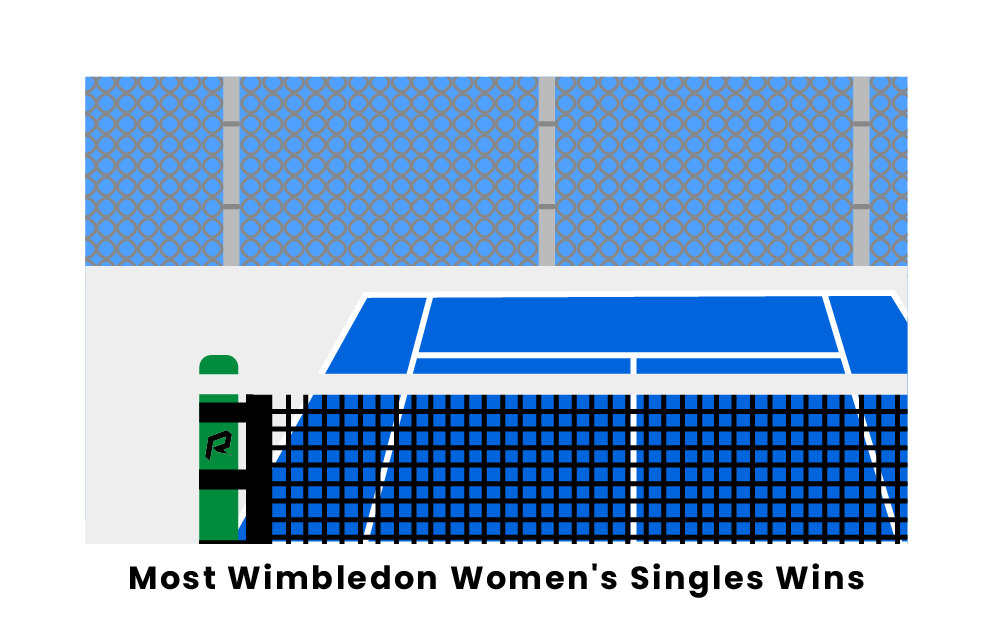 Which women’s tennis players have the most Wimbledon Singles Championships Wins in the Open Era?

Emboldened by her first Grand Slam title at the 1987 French Open, Steffi Graff entered her first Wimbledon final the same year. Though she lost in straight sets, Graff returned to win the next two titles against Navratilova in three hard-won sets. From 1991 onwards, she won five more Wimbledon wins, her last being in 1996 in two straight sets against Arantxa Sánchez Vicario. She is tied with Serena Williams for the second-most wins in Wimbledon women’s singles history with seven total wins.

As arguably the greatest female tennis player of all time, Serena Williams has a remarkable Grand Slam history, especially at Wimbledon. In 2002, she played and won her first Wimbledon final against her sister Venus Williams in two clean sets. The next year, she won again against Venus in a rougher three sets. After losing to Maria Sharapova in 2004, Serena did not return to the Wimbledon finals for four years and did not win again until 2009, when she played and defeated her sister for the win. Williams would win four further Wimbledon titles, her last in 2017 against Angelique Kerber. Tied with Steffi Graff, she has the second-most wins in Wimbledon women’s singles history with seven.

Three years after her first Grand Slam showing, Billie Jean King returned to the Wimbledon stage in 1966 and won against Marie Bueno over three contentious sets. In both 1967 and 1968, she successfully defended her titles against Ann Haydon-Jones and Judy Tegart-Dalton in two straight sets each. She would return to win three further Wimbledon championships in 1972, 1973, and 1975. Though she never played another Grand Slam final after her last Wimbledon, Billie Jean King retired as a legend in the history of women’s tennis. With five total wins, four during the Open Era, she holds the record for third-most titles for women’s singles at Wimbledon.

After a consecutive series of wins at the Australian Open, Margaret Court, known then as Margaret Smith, won her first Wimbledon final in 1963. The match was against Billie Jean King and ended in two sets of 6-3, 6-4. Though she failed to defend her title in 1964 against Maria Bueno, Court took her winning title back in 1965. After five years of varying success, she returned to win Wimbledon one last time against Jean King in two infamously long sets of 14-12 and 12-9. Court thus retired with a total of three Wimbledon wins in the women’s singles division.

In the wake of a sensational debut year, Chris Evert won her first Wimbledon title against Olga Morozova, who she had just defeated at the French Open, in two quick sets (6-0, 6-4). After failing to defend her title the next year, Evert rode a wave of Grand Slam success that led her to a second Wimbledon win in 1976 against Evonne Goolagong in three contentious sets (6-3, 4-6, 8-6). Except for a doubles win alongside Maria Navratilova, she would win a Wimbledon title one last time in 1981 against Hana Mandlíková, giving her a total of three singles wins at Wimbledon.

Evonne Goolagong was the first Indigenous Australian to play or win a Grand Slam. In 1971, fresh off her first French Open win, she played her first Wimbledon singles final against Margaret Court and won handily 6-4, 6-1. Though she ultimately had much more success in women’s doubles, Goolagang played in three further Wimbledon finals for the women’s singles division, racking up two losses against Billie Jean King and one last win against Chris Evert in 1980. With two total wins, Goolagong retired with an impressive career record, and several unforgettable Wimbledon finals matches.

Petra Kvitová played Wimbledon for the first time only two years into her career but was beaten in the first round by Tatiana Perebiynis. The next year, she was again defeated in the first round by Maria Kirilenko. In 2010, she made it all the way to the semifinals but was defeated by Serena Williams. Ever-determined, Kvitová came back in 2011 and made it to her first Grand Slam title. Against Maria Sharipova, she won in two straight sets of 6-3, 6-4. In 2014, she won a second title against Eugenie Bouchard in a devastating 6-3, 6-0 match. Kvitová never played in a Wimbledon final again, but she left her mark on the tournament with two total wins.