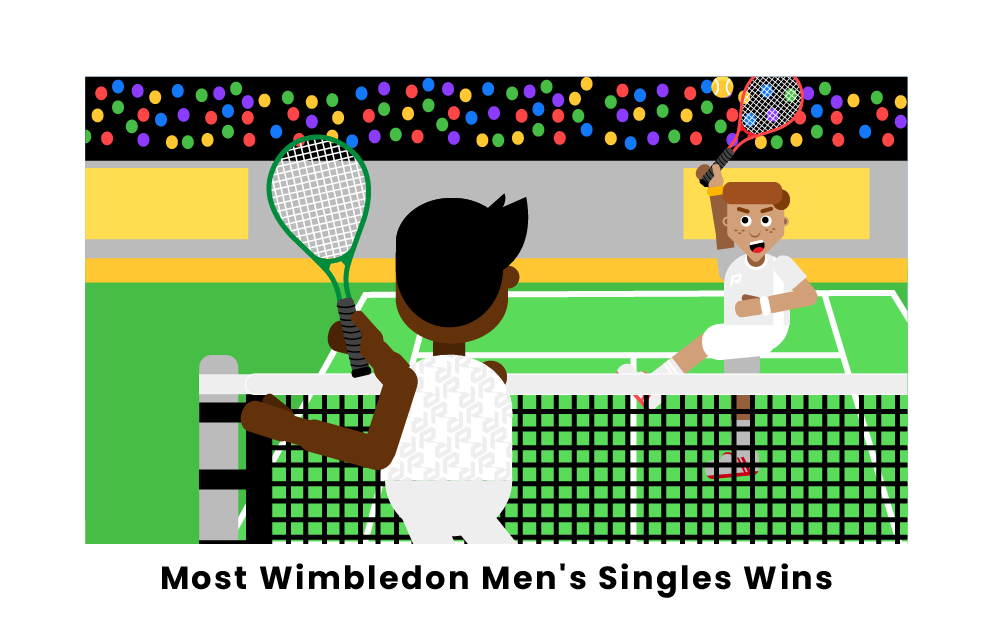 Which men’s tennis players have the most Wimbledon Singles Championships Wins in the Open Era?

In 2002, Roger Federer was ranked as the number seven seed going into Wimbledon. In the first round, he was beaten by the 154th seed. After the match, he was extremely disappointed. Since that loss in 2002, Federer has gone on to become the winningest tennis player in men's singles at the Wimbledon tournament, with eight wins. Between 2003 and 2007, he won five Wimbledon titles in a row. In his 2006 win, Federer lost only one set throughout the course of the entire tournament.

Pete Sampras holds a legendary status in Wimbledon in that he never lost in a Wimbledon final. Unlike many tennis players who have finished as runner-up in the tournament, Sampras has dominated the final every time he has appeared. Considering he has seven titles to his name (the second-most all-time), it’s no wonder why many consider him to be a Wimbledon legend. During the nineties, he won three finals in a row, followed by another four in a row. He’s considered one of the best tennis players of the decade.

With his six Wimbledon titles, Novak Djokovic is one of the greatest players to appear in the tournament. He has never lost in the first round of the tournament and has made it to at least the semifinals a total of ten times. Djokovic’s most famous Wimbledon win came in 2019 against Roger Federer. The match went the full five sets, and Djokovic only won in the fifth set after defeating Federer 13 games to 12. It was a long and hard-fought match. Many consider him the best male tennis player of the 2010s.

Before Roger Federer did it, Björn Borg was the first man to win the Wimbledon singles tournament five times in a row. Between 1976 and 1980, Borg dominated in Wimbledon finals. Perhaps his best showing in Wimbledon, however, was the 1980 final. He faced John McEnroe, who was seeking his first Wimbledon title. The two featured very different playing styles, and the matchup resulted in what many call one of the greatest tennis matches of all time.

In the open era in tennis, professionals are allowed to play in Grand Slam tournaments such as Wimbledon, but that wasn’t always the case. When Rod Laver was an amateur, he won twice in a row in 1961 and 1962, but once he turned pro, he was no longer allowed to compete in the tournament. Once the rules changed in 1968, he and other pros were finally allowed to play again. He then went on to win the 1968 and 1969 championships.

In the late 1970s, John McEnroe was a fresh face in tennis who stunned the world with his skill. In 1977, he reached the Wimbledon semifinals at just 18 years of age. At the time, he was the youngest man to have ever done so. McEnroe has a total of three Wimbledon wins, which came in 1981, 1983, and 1984. He was likely at his most dominant in 1983 and 1984, when he only lost one set during the entire tournament during each of those respective years.

Boris Becker shocked the world in 1985 when he won Wimbledon before his 18th birthday. The entire tennis world watched in amazement as he defeated 27-year-old Kevin Curren in the Wimbledon final. Becker was known for his aggressive style and fast play, which ultimately brought him three Wimbledon titles. He went on to become a finalist multiple other times in the tournament, but he never won again after his championship in 1989. He’s remembered most fondly for the first years of his pro career, when he dominated despite his young age.

John Newcombe is instantly recognizable for his prominent mustache. That, alongside his spectacular tennis skills, catapulted him to international fame. John Newcombe, also known as “Newk,” won three Wimbledon finals over the course of his career. Two of those wins came in back-to-back fashion in 1970 and 1971. However, his first title came in 1967. Aside from his career in men's singles, he also won six Wimbledon championships in men's doubles. His legacy in Wimbledon is cemented thanks to his success in both disciplines.

With two total Wimbledon titles, Jimmy Connors proved his dominance on the grass courts of the All England Club on multiple occasions. Connors’ 1974 season proved to be one of the most dominant campaigns in the history of tennis. He won three Grand Slams, including Wimbledon, but was unable to play in the French Open. Had he won this final Grand Slam, he would’ve joined the elite club of players who have won all four in a single year. This club (at least for male singles) only includes Rod Laver and Don Budge.

Over the course of his career, Stefan Edberg won a total of two Wimbledon finals, though he found himself as runner-up another time. He also made it to the semifinal an additional two times. What Edberg is known for, however, is his impeccable serve and volley style of play. Many consider him to be a pioneer of this style of play, specifically as the person who perfected the aggressive serve and volley strategy.

Rafael Nadal is one of the most recognizable names in tennis, and he has certainly left his mark on Wimbledon as well. With two wins and three second-place finishes, Nadal has found his fair share of success in the tournament. His most iconic victory came in the 2008 final against Roger Federer in a match that lasted almost five hours. The two battled back and forth through stormy weather and rain delays. Many consider it to be the greatest tennis match ever played.

Throughout his career, Andy Murray found the mountaintop of the Wimbledon title twice. He did this in 2013 and 2016. He also reached the semifinal an additional four times and was runner-up in 2012. In his first win in 2013, Andy Murray managed to defeat Novak Djokovic, who had won the year before and was still gearing up for his streak of complete tennis dominance. Defeating Djokovic was no easy feat, and the match was an emotional one for Murray. He was the first British tennis player to become the Wimbledon Champion since 1936.